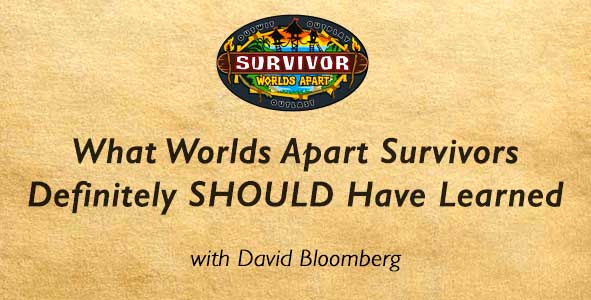 Survivor 2015: What Worlds Apart Survivors Definitely SHOULD have Learned by Now with David Bloomberg

Rob Cesternino talks with David Bloomberg, the founder of Reality News Online to discuss his strategy manifesto, “What Worlds Apart Survivors Definitely SHOULD Have Known by Now”.

Survivor contestants who are about to play should watch multiple seasons for perspective, not just the most recent one. There are more ways to win than the way that just worked for the latest Sole Survivor, and what worked for them will not work for everyone. Because all of the seasons are now available online, it is easier than ever to watch them and upcoming contestants have no excuse for not watching at least four seasons in preparation.

Rule One: “Scheme and plot”

Politicking and alliance-making are what the game is all about, not fishing and hunting. Players should make alliances right away, even if they don’t know who to trust yet, or else they might get voted out early. These initials bonds can be made based on whatever relationships present themselves, such as a shared profession or home state. Players should not be pushy while trying to make alliances, but instead look out for opportunities to make alliances. On the flip side, players should always say yes if asked to be part of an alliance.

Other facets of this rule include:

Rule Two: “Don’t scheme and plot too much”, or “Keep scheming secret and don’t backstab until you need to”

The first part of this rule is to not scheme with everyone, especially as an outsider to an alliance.

Another part is if a player is the swing vote, they should just say yes to both alliances so they alliances are comfortable which way they’re going to vote.

Third, players should never let another contestant know that they’re going to vote them out. After they are voted out it is okay to be nice to them, but if alerted to the plan they can plot a counter-attack. This sub-rule is broken less frequently now that players are more likely to want to pull off blindsides.

A guiding principle behind this rule is that playing Survivor is like performing magic tricks: a player needs to misdirect the other players during the game and believably articulate how they pulled it off to the jury. While players want to keep their plotting secret, they don’t want to keep it so secret that someone else can take all the credit for it. Conversely, during the game players should try to allow their alliance members to think they are making the decisions.

Some final points about Rule Two include:

Players cannot simply tie themselves to one alliance and hope it survives. Good players always have back-up alliances, sub-alliances, and side alliances. This helps players both to be safe if their alliance is getting picked off and to avoid placing second or third against a member of their own alliance.

Another way that players need to be flexible is by going with the flow, especially in the pre-merge portion of the game. While it is okay to suggest priorities that are different than what the majority of the tribe wants, such as making a shelter over making fire or vice versa, players should read the room and not push the issue.

Players are playing with strangers, people who are to be used as pawns in a game and they never have to see again. For this reason, they do not need to become friends for life. While players make friends on the island, good players can cut those friends when the time is right.

On the flip side of not letting friendship control a player’s game, not letting anger be in control is also important. While some players let their anger get in the way of their game, better players remain objective and put aside anger to enact their strategies. Relatedly, it benefits players to just be nice, even when the other person bothers them. Regarding challenges, players should keep their emotions in check whether they win or lose.

Another related rule is to keep political and religious views private, as voicing them may alienate tribe members. A qualification to this rule is when the rest of the tribe is outwardly religious, it benefits a player to pretend to be religious even if they are not.

All of the parts of this rule speak to people wanting to vote out people who make them feel uncomfortable, and players shouldn’t give others an extra reason to vote them out.

Rule 5: Pretend to Be Nice/Play the Social Game (and Keep Your Politics and Controversial Beliefs to Yourself)

As you’re making alliances, you have to pretend to be nice and play the full social game. Much of the social game comes into play right off the boat when everyone is looking for a reason to vote someone off. You need to continue to play it but it may not show its rewards again until the very end, if you’re still around to beg for votes to win.

In general, people aren’t going to ally themselves with you if they think you’re a jerk or you’re untrustworthy. Or, maybe worse, you’ll make it to the end and then the jury tell you to shove off – as they did to Russell Hantz TWICE and then Sash right afterwards. Compare that to the way J.T. was so nice that people didn’t mind that he had stabbed them in the back. So there can be a lot to be said for simply putting on the nice face.

The issue of politics and controversial beliefs hasn’t come up much in recent seasons, but looking back to older seasons, we saw Frank in Africa talking about gun control and the liberal media, and Peter in Marquesas with his holey yoga that made people think he was a fruit loop.

Rule Six: “Don’t be too much of a threat”

Players are often voted out for possessing the qualities that others perceive will help them win the game. While a person being physically strong is a threatening quality after the merge because that person may win immunities, being physically weak is a threatening quality pre-merge because that person may result in a tribe going to tribal council. A guideline is to vote out strong physical threats once they start winning immunity. Also, some players are threats because they aren’t perceived as individual immunity threats, giving them an easier time of making it to the end. Game knowledge can also be seen as a threat. While it can be good to talk about the game with other fans, it is hard to know who is fan without giving away viewership habits and non-fans may want to vote out players who know more about the game.

Overall, this rule demonstrates that Survivor is a backwards game. Players must “Outwit, Outplay, and Outlast”, but not too well or they well get voted out. They must suck, but not suck too much or else they won’t win.

Rule Seven: “Vote out the weak, then the strong, then weak, then strong”

First, vote out the weak players in the pre-merge game. These include tribe members who are challenge liabilities as well as tribe members who cause discord in the tribe. Keeping either of these types of players will result in more visits to tribal council.

Second, vote out the strong players who are not fellow alliance members in the beginning of the merge. These include physical threats as well as social organizers.

Last, get rid of are nonessential alliances members, starting with the ones who are not keeping the alliance together. However, depending on how the alliance is structured and who is left, it might be better to switch the order of the last two voting strategies.

Whichever way the vote goes down, it should be a player’s goal to be thought of better than anyone else in the Final Tribal Council. This preference could mean being more respected or more well-liked.

First Appendix: “Do whatever it takes to get idols”

Idols are ridiculously easy to find. Having idol provides a safety net and takes away the chance of anyone else having one. While players have to know when to use idols, production will often hide new idols.

A simple way for players to improve their chances in front of the jury is to just be nice. Also, it is important for players to take the right opponents with them to the Final Tribal Council and know who they are going to face. Bringing a goat or two to the finals is a good move.

In their Final Tribal Council, players need to own their game. The jury does not want to hear apologies. Instead, tell them what they want to hear. General statements, such as the non-apology “if I made you mad, I’m sorry”, are not effective, while specific apologies to individuals are good if that is what the jury member asks for. Because a player can’t decide how the jury votes, they need to listen to and adjust to the jury without pandering. It is also important to respect the jury and not tell them off.

Special Thanks to Dan Sinensky for the recap of this episode