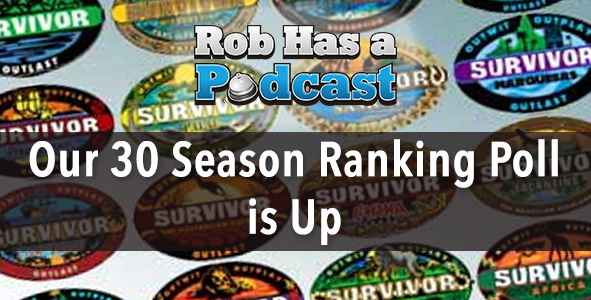 Vote NOW for Your Top 30 Seasons of Survivor

CLICK HERE TO VOTE IN THE 30 SEASON RANKINGS POLL

Rob Cesternino is joined by “The Tabulator”, Curt Clark (@CurtClark)to announce a brand new poll for the listeners of Rob Has a Podcast.  We’re allowing the fans for the first time to rank the 30 seasons in their top order.  The polls will remain open until midnight ET on Sept. 20th and then we’ll reveal the 30 season results of the RHAP community LIVE on the night before the premiere of Season 31 on Tuesday, Sept. 22nd.

After talking with Curt, Rob discusses the social media platforms he is currently using on RHAP to let you know all the ways you can interact with the show.

Finally, Rob talks with Bryan Molloy (@BMolloyDesign) about a new series of Survivor Cambodia inspired T-shirts that he has created.  100% of the proceeds from these new t-shirt will be donated to Give Kids the World / Hearts of Reality by Rob Has a Podcast.