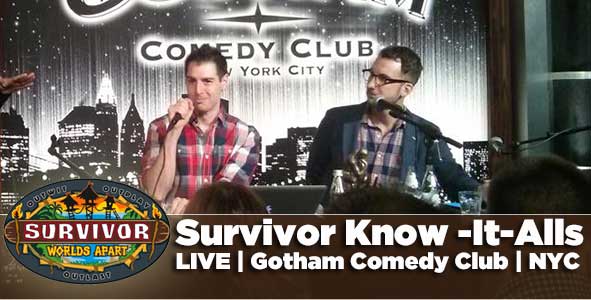 Coming to you live and in person at the Gotham Comedy Club is Rob Cesternino and Stephen Fishbach for the Survivor Know-It-Alls recap of Episode 3 of Survivor 30: Worlds Apart.

With a musical introduction, Rob and Stephen get a chance to talk to a great crowd for the second Live Survivor Know-it-alls. Stephen flat out said it was a bit of a boring episode but that didn’t stop the fun by any means. Rob said that the crowd at the comedy club was happy to see Will get votes and sad to see Nina go out. The guys felt that Nina wasn’t well fit for the tribe or the game as a whole. Rob felt it was odd that the confessional right after the immunity challenge turned out to be the truth and it was an oddity to see occur. Stephen felt it was the obvious result since she had voted against the majority last round. Stephen felt that Joe was getting the winner’s edit, with a comical reaction from Rob.
Rob thought the blowback from Will’s rogue voting last episode was worse than anticipated as the other weren’t too happy with Vince’s ousting. Stephen felt the imagery of Nina being sent away during the challenge embodied her place in the tribe dynamic.

Rob and Stephen then got to talk about the Blue Collar tribe and their wood-related work they deal with. Rob didn’t think Mike knew how the game works for Survivor and it is getting as repetitive as Groundhogs Day. Stephen felt Mike couldn’t be doing any worse in the social game at this point. Rob speculated that whatever word appears on your tribe flag, whether its brains, beauty, or a collar, that you might feel compelled to take on what role. The Rodney and Dan feuding about the odd mom joke/comments was interesting and the building drama in the Blue Collars overall is going to get a nice pay off, likely in the same vein as Tandang from Survivor Philippines.

Back on the White Collar tribe, monkeys are providing Shirin entertainment while disgust to everyone else. Stephen felt Joaquin (or “Joaq”) is playing off his early miscues well to get himself in a better spot later on. The lack of Max in this episode didn’t give much insight into his status. Shirin’s peculiar nature is perhaps putting herself in the odd ball spot and this is putting Tyler in a key spot later on. Stephen feels Shirin could be the next person voted out.

With the 2 hour episode looming, Rob guessed that maybe the first hour won’t be thrilling while the second hour might get better. Rob felt that the religion thing Lindsay brought up wasn’t a good idea and he polled the crowd for who was the best Lindsay in Survivor history.

Question from the audience: