Rob and Stephen start by talking about the vote. Stephen says it makes some sense to not form a back up plan because by doing so you are outing whom the bottom members of your alliance are. Stephen and Rob agree that Mike not playing his immunity idol was the right move. Rob compares this to the Three Amigos playing Malcolm’s idols, where Phillip went out, but Malcolm was out next. Rob also points out Shirin would be a jury vote for Mike.

Moving onto Dan’s perspective, this episode shows that Dan was not part of the schemes to take out Mike previously and Dan thinks Mike’s paranoia is unfounded. Dan’s one track mind is allowing Tyler to retain control.

Rob says Mike is now in a Chris Daugherty/Danni Boatwright situation because he is the lone outsider but can still go far because he has a good chance at immunity, still has an idol, and was able to show the fractures in the alliance during tribal council. Stephen agrees and gives Mike the Fishy for exposing the votes.’

Rob says Tyler is now a contender to win after emerging in the edit this week. Stephen feels Tyler is wrong in thinking Dan is only aiming for final six. Rob agrees because everyone is the hero of their own story in their head.

Rob and Stephen then talk about Dan pretending to apologize to Shirin. Rob says Dan is basically co-opting Will’s comments from last week and everything Dan did this episode was terrible. Stephen points out Dan’s poor tact while speaking to Shirin after the challenge. Rob wasn’t a fan of Shirin’s pitch to Dan, but Stephen didn’t have a problem with it.

Stephen is a fan of Rodney and feels he is in the best position in the game. He doesn’t think Rodney is going to quit.

Rob and Stephen both like the move of calling the bluff on the idol because if the idol is shown it probably isn’t going to be played. They wonder why the alliance of six didn’t huddle to make a decision, or if they did and it just wasn’t shown.

The Know-it-Alls close out the show by taking questions from the Rob Has a Podcast community. Should Tyler have targeted Dan after learning about the second vote? Should players cut down their weight to do better in weight based challenges? Should Mike have targeted Dan? Is this the best Pagonging ever? Did production give out two immunities to help Shirin and Mike? Was this a good end to Shirin’s story?

Special thanks to Kyle Faber for this week’s episode recap 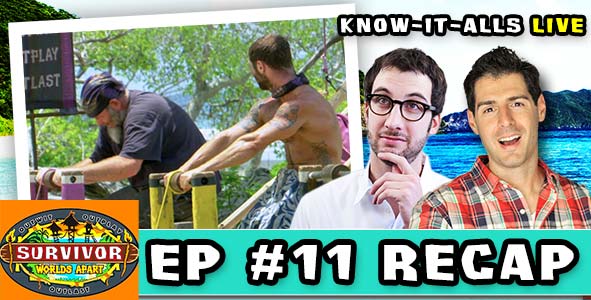