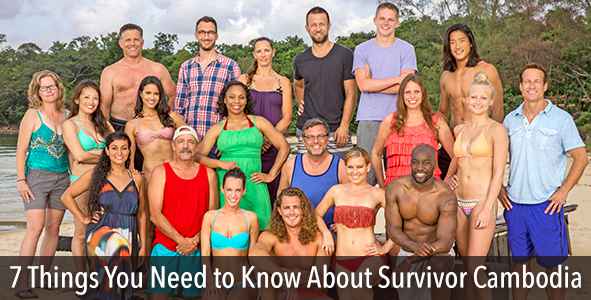 Survivor 2015: 7 Things You Need to Know about Survivor Cambodia

Rob Cesternino (@RobCesternino) and Josh Wigler (@RoundHoward) discuss the 7 Things that you need to know about the upcoming season of Survivor, Survivor: Cambodia.  Josh Wigler was on location doing press for Parade.com and got to witness the first 3 days of production.  Josh talks about his experience and what we should expect this season on the day of the official cast release.

READ ALL OF JOSH’S PRE-SEASON COVERAGE AT PARADE.COM

The Seven Things You Need To Know About Survivor: Cambodia

1) The Tribes Have Been Revealed

Here are the breakdowns of the two tribes that are starting the game:

2) Players Have Been Sharing Pre-Game Alliances

A number of players have discussed some of the pre-game alliance plans they’ve made, specifically Jeff Varner.

Mikey Glazer (@CelebSightings) posted a video of his pre-game interviews shot in Los Angeles before leaving for Cambodia which outlines who Jeff is planning on working with in the game.  (Note: A pre-game alliance does not always translate to an in-game alliance).

3) Classic Challenges will be Coming Back

This will not only be a season featuring returning players, it will also feature many returning challenges.  For some, it will be a chance to get redemption for challenges that have been problematic in the past and for others there will be chances to excel at what they’ve done best.

Additionally, the game will begin with a classic marooning with a twist that’s never been done before.

4)  Idols will be Hidden at Challenges

This season, the hidden immunity idols will be hidden at the challenges.  The players will find a map hidden at their camp that will tell them where to look.  This game twist had long been pushed for by EW’s Dalton Ross (@DaltonRoss)

One of the other twists that are being thrown at the players involves immunity idols that look differently than you would expect them to.  They may look like traditional idols or they may look like a stick.  Players will need to know when people are bluffing about a potential idol and when they have the genuine article

6) The First Tribe Headed to Tribal Council will Be Rushed

The losers of the first immunity challenge will head right to tribal council without any time to discuss the vote.  It’s unclear how this will affect that crucial first tribal of the season.  Without having time to talk, this could be a very unpredictable first vote.

7) Without Stephen Fishbach, There will be a New Survivor Know-It-All This Season

Our very own Survivor Know-It-All, Stephen Fishbach, will be one of the Survivor contestants in Survivor: Cambodia.  All season long, Josh Wigler (@RoundHoward) will be filling in for Stephen Fishbach every Wednesday night after the show.