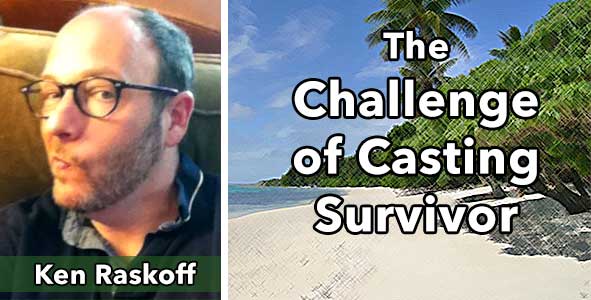 Rob Has a Casting Cast: Ken Raskoff discusses the challenges involved with Casting every season of Survivor

Ken Raskoff has worked for a total of 5 years in 2 periods at Survivor Casting, before recently returning to work with Mark Burnett’s as Senior Vice President of scripted features and TV.  Ken talks with Rob about the challenges the casting department faces each season and how casting the show is a lot more complex than it might seem.

Ken’s spent a good part of his career working in the movie department at NBC.  Ken worked under legendary programmer Brandon Tartikoff producing the long running “Movie of the Week”. Spending his career working in scripted, Ken was against the notion of “reality television” but got turned on to the series during Survivor Borneo and quickly became hooked.

Years later, after an introduction through a friend to Survivor casting head honcho, Lynne Spillman, he began working on casting Survivor. His first working on Survivor was in Season 11: Guatamala. Ultimately, Ken then left to work with Mark Burnett before Survivor: Panama, the next season.  After spending time working with Mark and taking some time off, Ken returned to casting for Survivor Nicaragua and stayed until Survivor Cagayan.

Among the many topics Rob and Ken discuss: