Right hand men Rob Cesternino and Stephen Fishbach are back to talk shocking blindsides and twerking on a live edition of Survivor Know It Alls!

Stephen was convinced that LJ had made a terrible mistake in tonight’s episode, but was once again blown away by the result of a tribal council. Rob shares his shock not in seeing Cliff be voted out, but how he was voted out – with Trish and Tony flipping and voting for him, rather than being eliminated through LJ playing his hidden immunity idol. Rob has no idea what Tony is thinking right now, and asks Stephen to help him see his thought process. Stephen believes the simplest strategy for Tony would be to stick with his fellow brawn tribemates, but feels that Tony is an agent of chaos and would be much more likely to risk a bigger move. Stephen also sees why this is a beneficial move for Trish and Tony because being in a five person alliance doesn’t mean anything if you’re in the fourth or fifth position.

The Know It Alls are still sort of confused by Tony’s move though. Rob doesn’t really understand why the foursome he was in was deemed inferior to the one he joined late in the hour, and is fairly convinced that a critical scene of strategy with some combination of Tony with Trish, LJ, and Jefra was mistakenly left on the editing room floor. Rob asks if Tony might have been working on behalf of his Cops-R-Us alliance with Sarah, who had been scheming in the last episode to try and get rid of Cliff. Stephen hopes that isn’t his thinking, because he feels too many players focus on wrongly perceived “big threats” rather than the people they actually need to get rid of.

Stephen feels a question that should be asked, though, is how good a move this was for Trish. Rob considers the move to be calculated, but doesn’t want to give her too much credit because Trish was motivated more by being annoyed by her tribemates than any actual strategic guile. Stephen feels the move is premature, and a “big move” like this is best executed at a later phase of the game, somewhere around the final 7. Rob points out that with the last remaining intact tribe now fractured, the merge phase of the game is going to be very interesting to watch.

Over on the Aparri tribe, brawn Sarah found herself as the swing vote on a new tribe with three brains and three beautys. Stephen assumed she would obviously gravitate toward the brains, and was surprised to see the exact opposite unfold. We also learned in tonight’s episode that Spencer does apparently intend to stick with Tasha and Kass, which most people didn’t foresee happening after last week’s down-to-the-wire tribal council vote. Rob and Stephen try to break down where the votes will fall in this group of seven and how the alliances will eventually shake out.

To RHAP up the show, Rob and Stephen answer your many questions about tonight’s episode: will the brains actually end up being major targets after the merge? Did Cliff’s tribal council performance result in his downfall? What’s next for outcasts Lindsay and Woo? And why did it take Survivor so long to do an episode about twerking? The answer to these questions and more only on Survivor Know It Alls!

Special Thanks to Brendan Noel for Tonight’s Survivor Know It Alls Recap.

Get Two Free Weeks of Hulu Plus:

HuluPlus.com/Rob – Watch shows like Family Guy, Once Upon a Time, New Girl, Scandal and Past Seasons of Survivor FREE for 2 weeks at HuluPlus.com/Rob 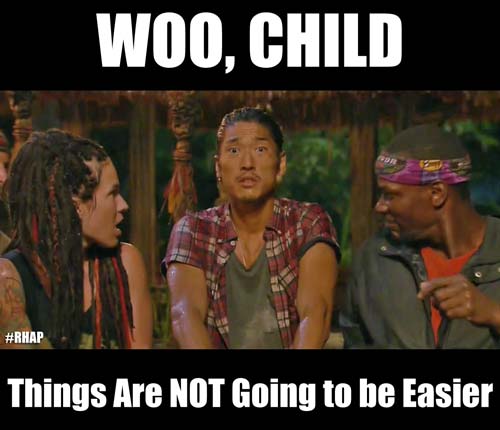