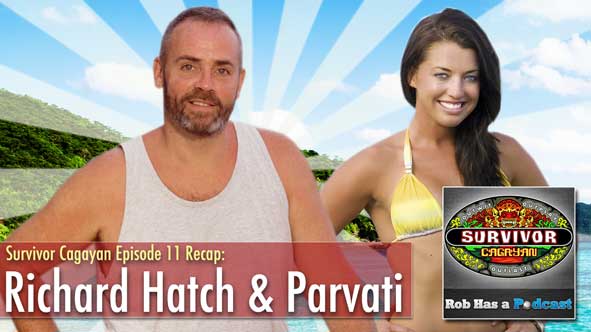 On one of the most star-studded recap episodes in the history of Rob Has a Podcast, Rob welcomes two former winners to the show. First, Rob talks with the original “Survivor” winner, Richard Hatch.  Then, Rob speaks with the winner of “Survivor Micronesia,” Parvati Shallow, to answer your voicemails.

Rob opens the conversation with Rich by mentioning Jeff Probst’s reference to Kelly Wigglesworth’s immunity challenge record. Rich says his immediate thought was that it meant that they may be bringing her back in an upcoming season. Their talk then moves to Richard’s opinion of Tony Vlachos.  Rob spoke to Richard last month at the Reality Rally and Richard was not too high on Tony.  Rob wants to see if Richard has warmed to Tony’s game and Rich says that he has not.  Richard thinks that Tony is “frenetic.” Rich thinks he has elements of a good player and there is a chance that Tony can win the game but Rich has not been impressed with his gameplay. Rich does not view Tony as a Russell Hantz-type player like Kass and Tasha did. He feels Tony should be more cautious in the game.

They talk about whether Tony should have given away that he has the “special idol” when he was goading Kass into voting for him. Rob and Rich wonder why the possession of the two idols isn’t making Tony play in a more calm and controlled manner. Rich also has not been too keen on what “Chaos” Kass has been doing this season.  Rich has been especially disappointed in Kass because he thought she was going to be a very smart player but Rich feels like she is being just as childish as Tony.  He thinks she pretends to be calm, but isn’t, and that she is calculated but it is irrational. Rich thought that she needed to go ahead and make a move on Tony if she wants to win the game. Rich thinks the chaos Kass creates is not helping her game. He then goes into some of the ways he created chaos during “Survivor Borneo,” which were to his benefit.

Richard Hatch was most impressed with Tasha and Spencer this season– they created beneficial chaos. Rich loves the masterful subtlety that they used in the game and hopes that viewers picked up on it.  Rich had become a big fan of Tasha and was very disappointed to see her go. He liked how she held it together when she was on her own. However, even though he is all alone, Rich still thinks that Spencer can win the game – even if he doesn’t win every immunity the rest of the way. Rich can’t get over the comment Kass made about wanting to keep Tony in the game because he wouldn’t get votes in the end. Rob thinks Kass was trying to get Tony to flush his idol. Rich thinks it’s a little unfair that Jeff still says “If you have an idol, now is the time to play it,” because it is misleading to the other players regarding the “special idol.”

As for Trish and Woo, Rich feels pretty solidly that they cannot win the game.  Rich won’t say that it’s impossible for it to happen but realistically, Richard feels like the winner will either be Spencer or Tony with an outside shot for Kass. Rich and Rob talk about Woo’s potential rationale about taking out Tony. Rob thinks it may have to do with the culture of “big moves,” and Rich wonders if Woo had a “I better do this sooner than later” mentality. Rob wonders if Trish can be a “Natalie White,” but Rich doesn’t think Tony is that offensive where jurors would vote against him. Rich says he would be really shocked if Trish won. Rob describes a secret scene where Trish took credit for Kass’s flip, as well as Kass calling Trish a “turd.”

Richard answers a number of questions from the listeners of Rob Has a Podcast including:

Fresh off of hosting “Survivor Live” and interviewing Tasha Fox, Parvati joins Rob by phone to answer your voicemails.  Parvati answers questions about a number of topics including:

Rob then discusses the Top 10 predictions for the “Survivor Cagayan” finale submitted by the listeners of Rob Has a Podcast and fills Parvati in on all the drama that took place after Survivor Know-It-Alls between Tony Vlachos and Stephen Fishbach.