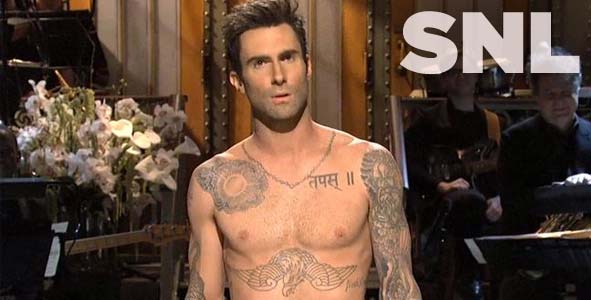 Once a month, Rob gets together with Rich Tackenberg to discuss what worked and didn’t work on the latest episodes of Saturday Night Live. After this weekend’s show with Adam Levine from Maroon 5 and “The Voice”, Rob and Rich look back on this show and the last one hosted by Jennifer Lawrence. Later in the show, Rob and Rich also discuss the latest episode of “The Office” and the big reveal from that show (starts at 1:01:35).

For the most part Rob and Rich enjoyed this week’s show. While the monologue with Barack Obama meeting Martin Luther King, Jr. was certainly funny, the guys weren’t sure if it was in good taste. The monologue was great featuring SNL hosting coaches showing up for Adam Levine in the form of Andy Sandberg, Cameron Diaz and even Jerry Seinfeld.

In the main show, the guys thought it was interesting that there would be back to back sketches about gay characters – one where gay characters accused everybody of being gay and one where Bill Heder was playing a gay firefighter. In between was Rob’s favorite sketch of the night which was a play on the CW’s “Sex and the City” prequel, “The Carrie Diaries”. In “The Sopranos Diaries”, the characters showed the Sopranos characters in high school with Tony, Paulie, Silvio, Carmella and even Dr. Melfi.

Rob and Rich weren’t sure why Andy Sandberg came out of retirement to bring us another digital short, making fun of the “YOLO” generation. Rich was really amused by Bobby Moynihan as “Anthony Crispino” during weekend update. There were also some funny moments when the band “Train” feuded with “Blink 182” in a wine serving cafe. Plus, both Rob and Rich were amused by “The Biden Bash” to end the show.

Last week’s show wasn’t as strong for the guys. Both Rob and Rich said the opening monologue with Lance Armstrong, Manti Te’o and Jodie Foster was kind of a catch all. The monologue didn’t work with Jennifer Lawrence trying to make fun of the other oscar nominees either. There didn’t seem to be much reason to bring back the “Girlfriends Talk Show” either. Rich really didn’t care for the post “Hunger Games” press conference.

On the plus side, both of the guys really liked the Starbucks commercial parody for the Verismo that gets your name and order wrong in your own house. The guys also enjoyed the “Lord of the Rings” parody for an additional 18 films to be added to the series by Peter Jackson.

If you saw this week’s episode, the show ended when Jim and Pam got in to a fight and the camera and after the fight, the camera crew is revealed (Reality Blurred wrote about this and has the clip from the episode).

Rob and Rich discuss how they don’t think this was a good idea for the show because it makes absolutely no sense that they could actually have been filmed for some production for all this time.  That being said, Rob thinks an interesting story line that could cause him to watch the end of the series.