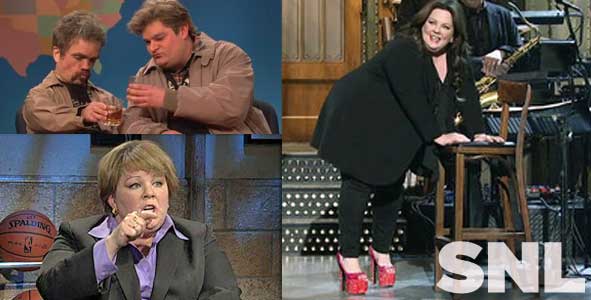 Melissa McCarthy returned to host Saturday Night Live for her second time this past Saturday, and Rob Cesternino and Rich Tackenberg are back to do what they do best – complain about stuff in an SNL podcast!

Rob and Rich begin by talking about the Kim Jong Un cold open. Both believe the translator sketches are a misfire and in terms of the actual jokes, the sketch went on too long and didn’t really go anywhere. One of Rich’s pet peeves is when the signature “Live from New York” line is changed or omitted, and he was not pleased with Celebrity Apprentice superstar Dennis Rodman mangling the intro.

Overall, Rob and Rich thought the show was decent and appreciated that Melissa McCarthy always works very hard to make the material work. Highlights included the ESPN “Outside the Lines” parody of the Rutgers controversy, the ham bake-off sketch, and the “Bathroom Businessman” commercial parody.

Weekend Update also had an up night with appearances by Jacob the Bar Mitzvah Boy and Drunk Uncle with special guest “Peter Drunklage”. Even Rich, who usually dislikes Kenan Thompson’s impressions, enjoyed Charles Barkley’s visit to the desk. Rob and Rich also go through the power rankings of Weekend Update correspondents.

At the end of the podcast, Rob and Rich break down all the recent late night news of Jimmy Fallon replacing Jay Leno as host of The Tonight Show, rumors of Seth Meyers taking over for Fallon, and how all this news will affect Saturday Night Live next season.

Vince Vaughn will host SNL next week. The SNL podcast will not return next week, though, as Rob is headed to New York for Reality Game Masters.