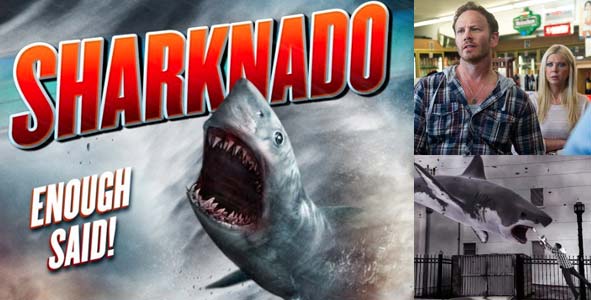 Just when you thought it was safe to go in the water… or drive a car… or be in your house – Here comes the Syfy original film, “Sharknado”. Rob Cesternino is joined by Big Brother 12’s Matt Hoffman to discuss the summer film which is taking the world BY STORM.

Sharknado stars Beverly Hills 90210 alum, Ian Ziering as Fin, a pro surfer turned barkeep who is taking it upon himself to defend his family and Los Angeles from a hurricane and eventual tornado filled with sharks. His estranged wife, played by Tara Reid, is also in the movie (which is probably the nicest thing we can about her performance)

Rob and Matt breakdown the story of Sharknado and try to fit together the pieces of the film to try and better understand the plot. Among the questions the guys try to piece together, Rob and Matt will explore:

I think we’re going to need a bigger podcast when it comes time to start talking Sharknado!