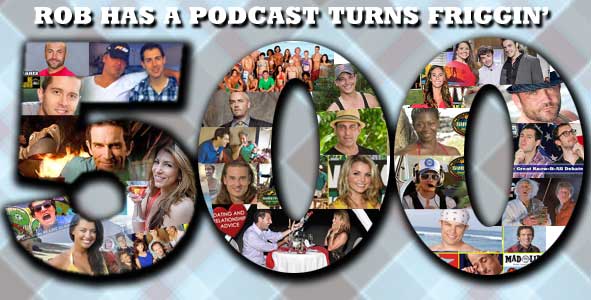 LISTEN TO THE 1000th EPISODE OF RHAP

Coming to you live for the 500th time… it’s the Rob Has a Podcast 500th episode special with Rob Cesternino and Nicole Cesternino. Rob and Nicole kick off episode number 500 with a special rendition of the “Friggin 500” theme song recorded by Aaron Robertson.

Rob and Nicole play a clip from the first Survivor podcast that the together, The Heroes vs. Villains premiere podcast.  In the clip Rob explains how bad the audio setup was when he and Nicole first started recording the podcast.

Then Rob and Nicole answer questions that came to us from the listeners on our Facebook fan page.  Many of the questions were about who and what were the best podcasts and guests on the show.  Rob says that he thinks the best podcast episode was the interview with Boston Rob from October.  Rob also recalls several other of his favorite shows including his interview with Jeff Probst, the first time Russell Hantz was a guest on the podcast, the Saved by the Bell podcast with Eric Stein, The Rebecca Black Friday Podcast and the Willy Wonka podcast with Matt Hoffman.

Rob also reveals what it takes to be the worst guests on Rob Has a Podcast.  Rob wonders how he and Stephen Fishbach would do on the Amazing Race together.  Nicole thinks that they would struggle.  Rob asks Nicole a very special Ding / Marry / Kill as well.  Plus, Rob offers some podcast advice to anybody who is listening to the show.

Finally, Rob plays some voicemails from friends of the show who want to wish Rob and Nicole well on show #500.

LISTEN TO THE 1000th EPISODE OF RHAP

For the next 500 shows, Subscribe to Rob Has a Podcast on iTunes