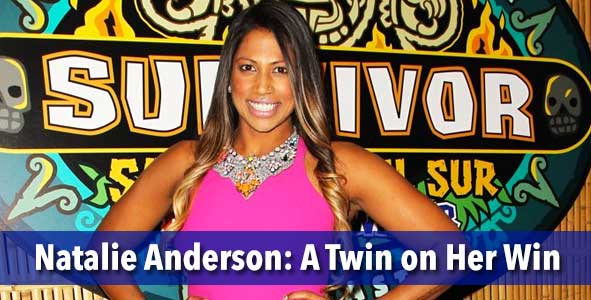 Rob Cesternino talks with the reigning winner of Survivor, Natalie Anderson, to discuss her victory in Survivor San Juan Del Sur.  Natalie gives Rob her most extensive interview to date about how she became the winner of Blood vs Water 2.

Natalie details to Rob how she and her twin sister Nadiya got cast for Survivor after Lynne Spillman contacted them in the spring of 2014.  After thinking they were eliminated from consideration, they returned to the casting mix only 2 weeks before the start of the season.  Natalie describes what her preparation was to get ready to go on the show.

Rob asks Natalie to talk about her reactions to seeing Nadiya become the first player kicked off the show.  For Natalie, this was incredibly difficult to be apart from her twin.  Natalie says that Nadiya isn’t too broken up about Natalie being the winner and they are happy for each other.

Natalie gives Rob a lot of detail of what life was like in the early days of Hunahpu.  Natalie doesn’t understand why the show didn’t portray her as someone who was on the receiving end of the abuse from John Rocker.  Rob suspects that because Natalie didn’t play the event for sympathy it would have been difficult to depict in the show.

A sometimes forgotten, yet huge moment in Natalie’s game came when she took Julie’s place on Exile Island in Episode 6.  That event had major ramifications for Natalies game.  First, taking care of Baylor really made Natalie a solid alliance partner in the eyes of Missy, not to mention the bond she created with Baylor.  Also, Natalie prevented Julie from quitting the game during the torrential downpour which happened while Natalie was at Exile Island.  Julie quitting days later would save Jeremy from the first vote after the merge.  Finally, going to Exile Island gave Natalie the clue to find the hidden immunity idol that she used to vote out Baylor at the final 5.

Natalie’s game took a big turn after Jeremy was voted out at Final 10.  Natalie tells Rob that she would have switched to vote with Reed and the guys but her former alliance took her back so quickly.  She couldn’t believe that Jon showed her that he had the hidden immunity idol.

After returning with her former allies (who voted out Jeremy) she wanted to blow up Reed’s game and ultimately did when Keith didn’t “Stick to the plan”.  Natalie says that she figured out what was really going on after a conversation with Wes and then implored Jon to play his idol.

With Reed out of the way, Natalie continued to push to get Jon out and avenge Jeremy.  Natalie describes how she went about pulling off that she accidentally voted off Keith instead of Wes.  By going to the beach and crying, Natalie got sympathy from Jon and he didn’t want her to beat herself up.  Natalie then plotted to take out Jon at the final 6.

Natalie also goes in to detail about her thought process to take out Baylor at the final 5 by playing the hidden immunity idol for Jacyln. Then, she describes for she got Jaclyn to vote out Keith and take her to the final tribal council.

Rob gives Natalie a bunch of questions from the RHAP audience including whether Natalie would have ever voted out Jeremy, what did she think of the reunion show, does Natalie want to go on The Amazing Race again, what was the luckiest thing to happen during the season and also what she thinks about Baylor and Missy’s new contest.

Get Missy & Baylor to come to YOUR Birthday

Listen to the Borneo Chapter of EVOLUTION OF STRATEGY for FREE