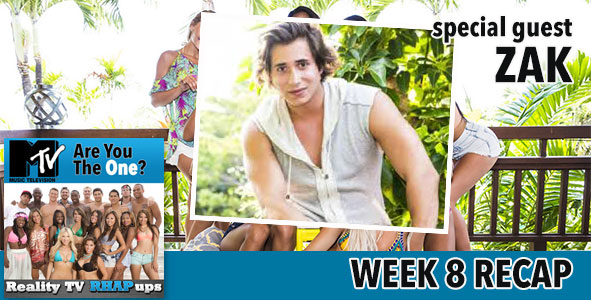 In this special edition of the Are You the One RHAP-up podcast Brian (@busdriversroute) and Ali (@lashtweets) felt it was time to get a firsthand take on the season. So they brought on Zak to give us all the goods!

With so many ups and downs (mainly downs) throughout the season we needed Zak to help us understand some of the questionable moves being made and the motivations involved. We got to touch on everything involved in this season including how he first joined the show, what the matchmaking process was like, who he was initially attracted to and if he felt he lived up to being the first Canadian on the show.

Plus of course we talked about his relationship with Hannah in regards to how it started and what attracted him to her. Also what their relationship is like now and what happened with his connection with Cheyenne.

We broke down the heart vs. strategy debate that we’ve been having all season and found out exactly what strategies have been implemented. We also discussed the major blow up between Kiki and Devin and touched on what we didn’t get to see.

Finally, of course we took plenty of great questions from our listeners on Facebook and Twitter so continue to submit those all season. Hear everything that Brian and Ali have to say about this season by subscribing at https://robhasawebsite.com/challengeitunes so you don’t miss a single episode.