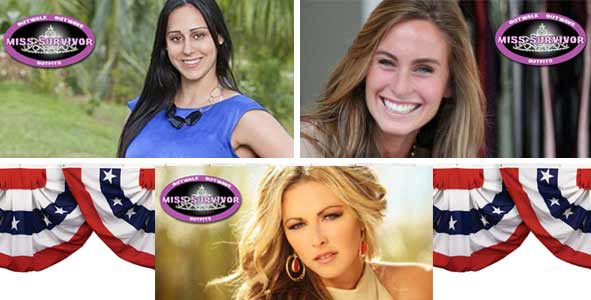 RC, Kim and Chelsea will take place in the first ever Miss Survivor Debate

It’s the first ever Miss Survivor Debate featuring the three 2013 finalists: Chelsea Meissner, Kim Spradlin, and RC Saint-Amour. Rob starts out introducing each candidate and then explains the format of the debate. The questions are from Rob and also submitted by the listeners of Rob Has a Podcast via the Facebook fan page. Each woman will have 60 seconds to answer a question and 30 seconds for a rebuttal, if necessary.

For the first question, 14 year-old Jimmy Thompson wants to be reassured that Survivor will still be thriving in 4 years. Chelsea thinks and hopes it will still be around, and gives him some pointers for his application video. Kim says she has wondered the same question and thinks the loyal fans will never get tired of it so she has high hopes for its longevity. RC thinks she, along with Chelsea and Kim, have contributed to the longevity of Survivor by being a strong competitor and keeping the show interesting.

The next question is about quitters, and whether any measures should be put in place to prevent people from quitting Survivor. Kim understands the frustration, but she doesn’t think any measures should be put in place because part of what she loves about Survivor is seeing human nature play out. RC agrees– she doesn’t think anyone should be held against their will. Chelsea thinks part of the show is “outlasting” and quitters add to the entertainment and show that they weren’t able to outlast. Kim says she’s willing to change her opinion, however, if it’s what the voters want.

Question 4 asks if term limits should be applied to returning contestants. Chelsea thinks a lot of the people who return are fan favorites and it’s interesting to see their growth as a player. Kim agrees. She thinks the people who have a problem with it probably haven’t been asked back. She doesn’t feel that returners necessarily have an advantage either. RC also agrees, saying she really enjoyed seeing Boston Rob come back and own his season.
Rob becomes frustrated by the agreeableness of the women, so he entices them by showing them the Miss Survivor sash that they are playing for. RC takes the opportunity to remove her leopard print top to reveal the leopard print bikini she promised her fans. Chelsea asks Rob what a Mr. Survivor winner would win, and Rob says they’d get a blazer.

For Question 5, Matthew McParland asks if Rob had to go away for a week and couldn’t podcast, would you fill in for him and who would talk to? Kim says she would fill in, or she might get one of her more entertaining friends to fill in, such as Colton, Alicia, or Kat. She’d like to get some controversial guests on, and she liked RC’s platform. RC says no one will be able to replace Rob, but she would do her best to further Survivor peace and hash out issues, as was part of her campaign. Chelsea says if that’s what the fans want, she thinks she could make it entertaining and she’d bring Kim in as a guest.

The next question pertains to the Miss Survivor debate sponsor, Audible.com. Rob wants to know the contestants all-time favorite book. RC’s favorite book is The Giving Tree because of its simple and important message. Chelsea’s favorite book is Rich Dad, Poor Dad and No Opportunity Wasted by Amazing Race host Phil Keoghan. Kim mentions three favorites: How to Win Friends and Influence People, The Poisonwood Bible by Barbara Kingsolver, and Plan B by Anne Lamott.

For Question 7, Laura Holzwasser asks who the ladies would like to go against if they were brought back for a returning season. Chelsea says it would probably be Kim– she thinks people would like to see them go against each other. Kim says she couldn’t fathom going against Chelsea, so she picks Parvati. She thinks two strong female winners going against each other would be interesting. She says she would be up for any combination, though. RC says it would obviously be Abi. Kim would rather see her go against Pete.

For the next question Rob asks the candidates if they would be willing to step in and mediate and resolve any hypothetical arguments between him and his wife Nicole. Kim says that one of her callings is being a mediator so she thinks she would be excellent at it. RC feels that Miss Survivor shouldn’t have a place in Rob and Nicole’s marital disputes, but she would be happy to get the Survivor therapist, Dr. Tara on the line to mediate. Chelsea says she’d probably make things worse.

Next, Patrick Rettger asks who they would endorse for Mr. Survivor. RC says Russell Hantz, Kim picks Boston Rob, and Chelsea picks Troyzan. Then Kim tries to amend her answer in a rebuttal, by picking Rob Cesternino, but he informs her he is not eligible.

While they wait for Kim to get back, Chelsea and RC answer a question from Rob’s Fact Checker about whether Survivor will go to 40 seasons.

The RC gives a closing statement in which she thanks her team and fans, compliments her competition, and past Survivors such as Rob for inspiring her. She says she won’t disappoint if she wins the title. Chelsea thanks Rob for putting the competition together, thanks the fans, and she wishes the best for everyone involved. Kim says she has no regrets and she couldn’t have asked for a better group to be part of this with. She also says she trusts the voters to make the best selection.

The last question is about whether a write-in candidate should be allowed, as many viewers have requested. Chelsea says that while the write-in option sounds stressful for Rob, but says “if Abi wants to come in and try to kick all of our asses, then let her.” Kim also agrees, as she wants the voice of the people to be heard. RC is not in agreement for it this year, but she is in agreement with it for the future. She thinks rules are rules, and it would have to be mentioned up front, rather than mid-competition. She says all 18 women eligible had their chance in the first round, and her decision has nothing to do with Abi coming in 4th place.

In the last question, Jeffrey Meier wants to know who was the best Survivor player of all time. Once again, RC supports Russell Hantz. Kim says Boston Rob– even though it wasn’t great TV, his last season was flawless. Chelsea says she’s a Sandra fan– she’s entertaining and won twice.

Rob thanks everyone for participating and congratulates them on a job well done in the debate. He says that starting tomorrow, you can go to MissSurvivor.com to vote once. You will have 4 days to vote. The winner will be revealed live on Tuesday, February 12th.