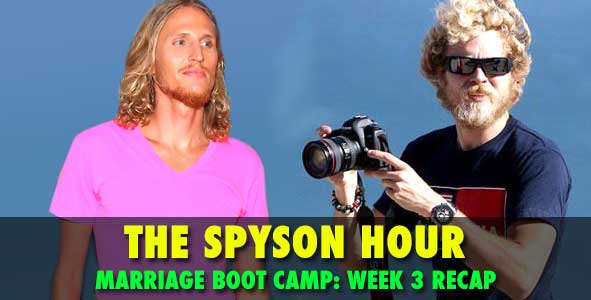 Spencer Pratt and Tyson Apostol return to the podcast to recap episode 3 of Marriage Boot Camp: Reality Stars on WETV.  Rob asks Tyson about the tumultuous week that he and Rachel had this week after the bombshell was dropped that Rachel occasionally disappears for long stretches of the night without Tyson knowing where she is.

Tyson and Spencer discuss the conflict that erupted on the show between Rachel and Heidi and then with Rachel and Natalie.  Plus, Tyson reveals the injuries suffered from getting shot with a paintball gun on the show and much more.

Spyson also discusses a number of stories from the news this week including the New England Patriots and #Deflategate, Lindsay Lohan’s health scare and the closing of the company that makes Skymall.  Also, we’ll find out why Spencer has had a negative experience traveling through some of the country’s airports.