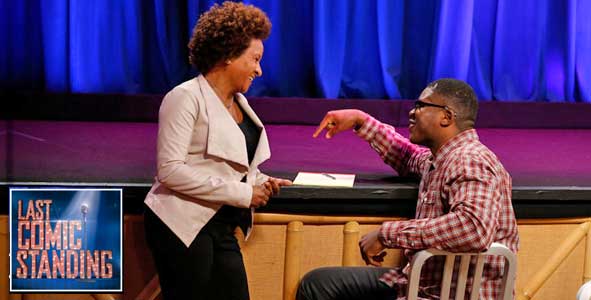 Rob Cesternino and Mike Bloom recap Episode 7 of Last Comic Standing 2014. In this episode the contestants did a pre-interview for the Ellen Degeneres show.

The three best performers were Nikki Carr, Monroe Martin and Rod Man who all got to appear on the Ellen show. After all three comedians did their guest spot on the show, the audience voted and Rod Man was selected as the winner.

After Rod Man received immunity, the players voted and Lachlan Patterson received the most votes for this week. Lachlan had to select somebody to face-off against in the showdown and Lachlan selected D.C. Benny.

The two comedians performed in front of the judges and a live audience. DC Benny discussed the time that he overdosed on Unagi and raised his libido. Lachlan Patterson had his finest hour this week and really had a strong set. The judges agreed and selected Lachlan as the player to move on.

Next week the players will be forced to conduct tours of the Universal Studios lots.