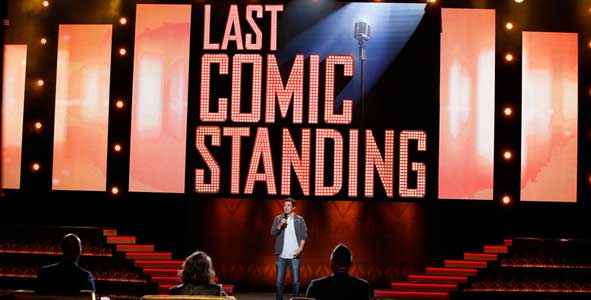 Rob Cesternino and Mike Bloom (@AMikeBloomType) recap the first night of the semi-finals on Last Comic Standing 2014.  It was a night when 14 comedians competed and 5 comedians moved on to the next round.  The five comics that were selected by the judges to advance were: Jimmy Schubert, Karlous Miller, Aida Rodriguez, Monroe Martin and Joe Machi.

This week the comedians received guidance from the veteran comedians, Wanda Sykes and Amy Schumer.  The two women provided advice to the comedians before each of their sets.

Sadly, some of the notable comedians from the first four nights of invitationals did not make the cut, including the woman best known for shouting, “Tell it to my balls!”, Deanne Smith.

Next week, 14 more comedians will compete for the 5 final remaining spots in the semi-final round.