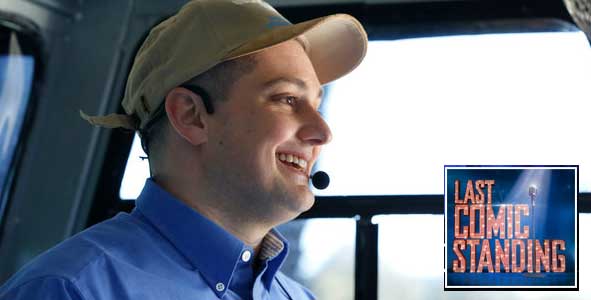 Last Comic Standing 2014: Recap of Challenge Round 3
Now playing
RHAP Amazon Shop: Amazon.com/shop/RHAP
Last Comic Standing 2014: Recap of Challenge Round 3[/caption]
Rob Cesternino and Mike Bloom got together to discuss the most recent episode of Last Comic Standing, titled “Tram It All In”.  They opened the podcast by happily revealing that the show will be renewed for next season.  Mike felt that this episode was very fun, calling it the most tense episode yet.
In the third of the challenge rounds, this episode had the comics testing their improvisational skills by doing improv jokes for the riders of the Universal Studios Tram Tours.  Howie Mandel served as their improv mentor, and both Rob and Mike felt that Howie gave each of the comics basic advice, except for Joe Machi.  Howie orchestrated a  ruse where some tourists were told Joe was George Clooney in prosthetics, which served to warm up the Joe’s improv skills.  Mike felt this prank was on the level of Survivor’s Candice Cody’s.
Rod Man’s tour is shown first, which seemed to get the most TV time.  Rob felt that this could be because the show is seemingly highlighting three of the contestants more than the others, Rod Man, Joe Machi and Lachlan Patterson.  Mike and Rob did think that Rod Man had some great jokes, particularly when calling Norman Bates “Albert”.  Next to go is Joe Machi, who opens with a bit about Universal Studios being built on the remains of a burned down children’s hospital.  Rob felt how Joe’s formula of presenting an innocuous thing, then giving his twisted take on it in the deadpan, awkward delivery is the gist of Joe’s comedy.
Nikki Carr, Karlous Miller, Rocky LaPorte and Monroe Martin got much shorter clips of their tours, with only one or two jokes each landing with the audience according to Mike and Rob.  They talked about how Karlous is perhaps the weakest of the remaining comedians, with Mike likening him to a “floater” in Big Brother.  Lachlan Patterson was last to go, which both thought worked better than they would have guessed.  Mike pointed out how by the last comedian to go, this audience would be less interested in the tour itself, and give more focus to the jokes.  From the start of the tour, Lachlan seemed to take the advice of Howie by peppering the audience with jokes in a rapid fire manner.  The fake movie sequels seemed to do well with the tour, which propelled him to immunity.
In the voting portion, Lachlin voted for Joe, calling him the biggest threat, with Rod Man and Karlous voting Rocky, Rocky voting Karlous, Joe voting Monroe, and Monroe and Nikki voting Joe, to put him into the showdown.  Joe stuck with his pick and selected Monroe as his challenger.
In the head to head challenge, which JB Smoove deemed the greatest showdown of all time, the judges couldn’t decide after the first round of standup, so both Monroe and Joe went for another two minutes.  Rob and Mike didn’t feel the same as the judges, having given the edge in round one to Joe, and an even bigger edge to him in round two.  Even after the second round, the judges were deadlocked, which prompted a third, sudden death round of one joke each.  Joe ended up with the clear advantage after that round with an elaborate take on how the founding fathers would talk about America today.  As with the previous two rounds, Rob and Mike felt that Monroe was weaker, leaving a lot of his bits underdeveloped.  Rob pointed out that going back to a diabetes joke in the sudden death round proved that Monroe wasn’t deep on material, which is why the judges ultimately went with Joe as the winner.
Monroe Martin will now face Alingon Mitra in the “Comic Comeback” competition to earn a spot back on the show.  Alingon will look to out battle his forth straight contestant.  Mike called his run Matt Elrod from Survivor: Redemption Island-esque.
Next week, Rob and Mike will discuss the Gilbert Godfrey roast, where the remaining comedians will perform at a roast of the Sideshow Network podcaster and rumored Celebrity Apprentice contestant.
You can catch Rob and Mike on twitter, @amikebloomtype, and @robcesternino.