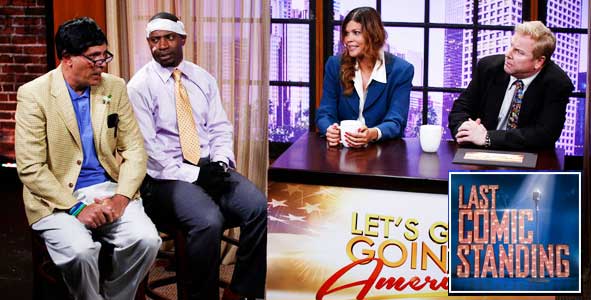 Last Comic Standing 2014: Recap of the First Challenge Round

Rob Cesternino and Mike Bloom recap the first of the challenge rounds on Last Comic Standing 2014.  This week the contestants performed sketch comedy for Cheryl Hines to see how well they could act in a comedic sketch.

Jimmy Shubert and Aida Rodriguez get eliminated in the Challenge Round as Rod Man wins the first head-to-head battle on Last Comic Standing.

The two teams were divided after the 10 comedians selected a can of peanut brittle filled with either a flower or a snake. The “Sketchy Snakes” consisted of Lachlan Patterson, Nikki Carr, Joe Machi, Monroe Marin and Karlous Miller.  “The Business”, which featured more of the veterans on the show, featured Jimmy Shubert, Aida Rodriguez, Rod Man, Rocky Laporte and D.C. Benny.

After tensions flared between Jimmy Shubert and Aida Rodriguez (both on the stage and off), it was clear that “The Business” was going to lose the first challenge.  Cheryl Hines said it was a failure to listen to each other that cost them the victory.

Each of the comedians had to nominate somebody that they thought they were funnier than.  The “Sketchy Snakes” were immune from the vote and could not be nominated for the head-to-head challenge.  Aida Rodriguez, Nikki Carr, Rod Man and Karlous Miller all nominated Jimmy Shubert.  Jimmy had to select two comedians to face off against and chose Aida and Rod Man (Karlous and Nikki were immune this week).

The head-to-head battle took place at the Hollywood Improv.  Jimmy Shubert talked about how he got broken up with over a text message and traced that move all the way back through history.  Aida Rodriquez talked about googling herself and how little child support her ex has paid over the years.  Finally, Rod Man discussed a former boyfriend of his mom, Frank, who had a glass eye and a bad attitude.

The judges all agreed that Rod Man stole the show and Aida and Jimmy were eliminated leaving only comedians left to advance.

Join us for much more Last Comic Standing next week as we advance further into the competition rounds.