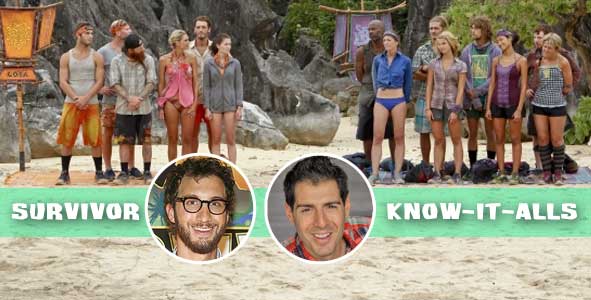 The Know-It-Alls are ready to swap till they drop.

Rob had a viewing party at his apartment for tonight’s Survivor Caramoan episode, so for the first time joining the Know-it-Alls is special guest correspondent, Survivor Samoa’s John Fincher, aka “The Finchelor.” Rob admits that he fell hook, line, and sinker for the previews last week, much to Stephen’s dismay. Rob give kudos to the editors for making him think that Corinne Kaplan was going to be leaving.They talk about how Corinne had some good zingers in her confessionals. Rob was even on the edge of his seat during Tribal Council. They wonder if Brandon Hantz stole all of Corinne’s airtime up to this point.

They discuss the decision to vote out Matt Bischoff instead of Julia Landauer. Stephen commends Cochran’s decision to target the power couple in Matt and Michael Snow. Fincher agrees with Stephen, but Rob is a little bit split on it. All three acknowledge that because of the dynamics on a Fans vs. Favorites season, it would appear that the down-in-the-numbers Fans are all screwed, despite appearing as if they have a “new lease on life” in their new tribes. Stephen points out that Rob is the only one of them who has played on a swapped tribe, and asks him how the alliances endure. Rob thinks his situation was a bit different because it was Men vs. Women, but because the Favorites have known each other for much longer that 15 days, it’s more likely they will stick together.

Then Stephen asks John Fincher about how to go about voting and thinking an idol might be in play, particularly in the case of when Kelly got voted out when Russell played his idol in Survivor: Samoa. Fincher says the move should always be to vote for the person who you know for sure doesn’t have it— a rule that Galu did not follow on his season.

Next Rob talks about Matt’s comments about Phillip prior to the swap. He thought Matt would have been golden when he ended up on Phillip’s tribe, and was sure that Matt and Michael would be the new inductees into Stealth-‘R-Us. Stephen thinks that was Phillip’s preference, but the fact that they got rid of Matt shows that the Favorites are making decisions as a group. Rob thought Matt overplayed the fact that he didn’t have an idol. Rob describes a new idol fake-out scale: from Matt’s “I swear I don’t have one” to Abi-Maria’s “I definitely have the idol and I’m playing it”. Ideally a player should be subtle. Fincher thinks Matt was successful in appealing to Phillip, ultimately the other favorites chose to go the other way. Rob asks if this was the most strategically sound episode in the history of John Cochran. Rob thinks Dawn and Cochran are now the only power couple left.

Rob thought this was a bad night for Phillip, but Stephen disagrees. He likes how Phillip Sheppard made overtures to Matt, Michael, and Julia. Stephen also doesn’t think Phillip was wrong to be put out during the challenge of having to run twice in a row. Stephen thought Phillip approaching Julia was good game play, which Corinne said was a bad move. Rob thinks Corinne came out with a little more power on this episode, and may have an ally in Michael. But Stephen points out that Michael didn’t have any sound bites where Michael reciprocated Corinne’s fondness. Fincher thinks Corinne will be able to get people to like her.

Next, the Know-it-Alls break down the tribe swap. The Gota (orange) tribe seemed to be a lot more stacked, with all of the Bros: Reynold Toepfer, Eddie Fox, Malcolm Freberg and Erik Reichenbach- as well as strong competitors Andrea Boehlke and Brenda Lowe. The immunity challenge wasn’t even close between the two tribes. Stephen wishes the swap had been random- rather than giving separate bowls to Fans and Favorites. He would have liked to see potentially a tribe ending up with a Fans advantage. Stephen says how the Fans acted horribly on Gota by spilling everything about their dynamics. Rob and Fincher ask Stephen if Sherri will get her groove back on the new tribe. All three of them agree that Fans vs. Favorites seasons are not fair. Stephen thinks the Fans are just there to possibly appear on future seasons, as ended up being the case with Erik.

Then Stephen asks John Fincher to assess Reynold’s game, since they are both handsome and look like Disney Princes. Stephen thinks Reynold’s handsomeness disguises his ineptitude, but Rob defends Reynold’s challenge prowess and idol-finding abilities. Fincher says that Reynold looks the part but he’s over-confident and doesn’t quite get it. However, Fincher thinks Reynold still has some time to learn.

In the viewer question segment, the trio discuss Andrea’s dream about Malcolm’s idol, Malcolm’s decision to lie about the hidden immunity idol, and Phillip talking to Julia. Rob then says he has now changed his mind about Corinne, and thinking it may not have been as good of an episode for her as he initially thought. He thinks voting out Matt broke up a trio she could have had with them, but Stephen thinks she will have more pull with Michael now, rather than being on the bottom of a 3-person alliance. They also talk about Phillip’s discussion with Matt and Michael. Stephen says he is starting to like Phillip’s strategic game. They also discuss which players improved their position the most. Stephen and Fincher think Malcolm’s stock went up– he can possibly form a “Bros” alliance. But Rob asks: “Has there ever been a Bros alliance that worked in Survivor?” They also discuss if there is any type of challenge that the new Bikal could win. Stephen takes issue with Rob’s suggestion that Cochran could do well with a puzzle, as he says the evidence suggests he panics at challenges. The three also dispute what might have happened if Brandon Hantz refused to go along with his tribe’s decision to forfeit the challenge last week. They also talk about if Cochran is using Dawn Meehan as a shield to be the mouthpiece to say who they should vote off.

Finally they debate about how many Bros are needed to make a Bros alliance. Rob thinks it should be four, but Fincher and Stephen disagree, saying it can be three– and agree with a viewer’s suggestion that Lex, Ethan, and Tom from Survivor: Africa were a successful Bros Alliance. John Fincher also laments that Kim Spradlin got married last weekend and he was unable to voice his objections in time. They also talk about Jeff Probst’s comments saying that Russell Hantz was his least favorite Survivor. Rob thinks Russell is overreacting because he is sure there are Survivors that Jeff actually hates but didn’t want to give any publicity to.

Rob reminds viewers there are only 2 days left for the kickstarter to fund the first original RHAP web series: RealityGameMasters.com. In addition to having John Fincher in studio tonight, Rob is continuing what Stephen dubbed “Handsome Man Week” by having Survivor Winner Aras Baskauskas as a guest in studio tomorrow, interviewing the latest cast-off Matt Bischoff, and talking to the latest evicted houseguest from Big Brother Canada, Aneal Ramkissoon.