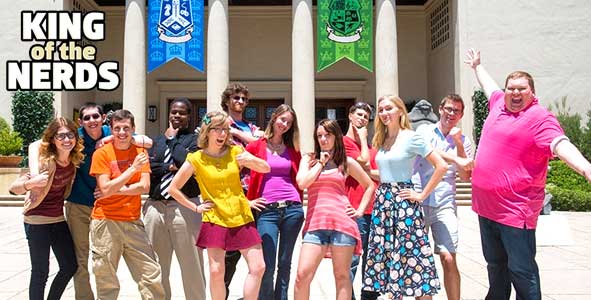 King of the Nerds 2015: Recap of the season 3 premiere

Rob Cesternino recaps the Season 3 premiere of King of the Nerds on TBS with Brendan Noel (@BrendanDNoel) and Mark Celera (@DawnsBread).

In the first episode of the new season Jacob was blindsided by the Blue Team and sent in to the nerd off to compete with Ori in a Manga trivia contest.  Ori prevailed making Jacob the first boot of the new season.  Rob, Brendan and Mark break it all down in the first of this season’s King of the Nerds podcasts.

The trio starts the show by going through all 12 of the new nerds competing this season. Among the topics discussed in the show include how Ori made himself the most hated nerd on the show in week 1, the calculating coldness of Dr. Kaitlin, how long the first ever King of the Nerds girls alliance will last, and whether or not we might see the first ever nerd showmance between horse lover Raychelle and brony Thomas.