“I love this game. I’ve always seen it as a game.” – Kim Spradlin

Kim Spradlin is known for her charming smile and her ability to make other players believe anything. A true “triple threat”, Kim is highly strategic, incredibly likeable, and a fierce athletic competitor.

Kim kept her head down at the beginning of the game and let the opportunities come to her. She manipulated players into thinking she was just one of the gang, when in fact, she choreographed every big move in the game.

Kim was able to convince members of her alliance that her deal with them was “the real” alliance and, one by one, each player was shocked to realize they had been duped by Kim’s big blue eyes and winning smile.

Dominating the entire season, Kim showed a natural instinct for the game that was virtually unparalleled by a first time player. Both charming and lethal, Kim skirted around bumps in her game with ease. She brought no goats to the final three and still won handily 7-2-0 against her closest allies.

“If everybody votes for the person that they think played the best game, then I can sit here with these two guys, and I’ll win” – Kim Spradlin

Kim Spradlin played on season 24, Survivor: One World, the season where opposing tribes were split by gender and shared the same beach.

A member of the Salani tribe, Kim was approached on the hike to the beach on the very first day and asked to be in an alliance with 4 other women: Chelsea, Sabrina, Kat and Alicia. This day one alliance would be the dominant alliance throughout the entire season.

Not wanting a target on her back, Kim did not play an overtly aggressive game. She made close friends with Chelsea early on and confided in her, making her feel like a real strategic partner. Viewers saw early on how good Kim was at listening to other people’s opinions before voicing her own. She never said, “We shouldn’t do that.” Instead she would agree completely with whatever the other person said but then add, “Do you know what worries me though?” and then talk about who she really wanted to target, ultimately convincing the other person to change their mind.

Dysfunction, thy name is Colton 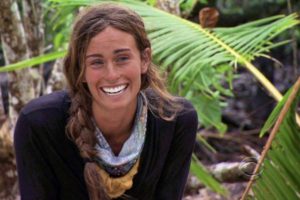 Kim was greatly assisted in her progress through the game by the highly dysfunctional men’s tribe. Slowly but surely, the men’s tribe was being taken over by the extremely aggressive and self-destructive Colton Cumbie. While the women lost three out of the first four immunity challenges, for reasons completely outside of the game, Colton was so irritated by Bill Posley he managed to convince the men’s tribe to go to tribal council to vote Bill out even after they won immunity. Colton was medically evacuated soon after under suspicious circumstances, leaving even fewer men to challenge Kim’s reign.

A master manipulator is born

At the tribe swap, Kim managed to hang on to everyone in her alliance except for Alicia who went over to the Manano tribe to fend for herself. Kim and Chelsea entered into a side alliance with Mike, Jay and Troyzan, the three men on the new Salani tribe. With her alliance of three women on one side, and her alliance of three men on the other, she was protected no matter which way the pendulum swung. In confessionals, she joked nervously about how easily her playing both sides could blow up in her face. But she was so good at deception, it never did. She even told both sides that the other group thought she was with them, laughing so naturally, both sides believed every word.

Their tribe won the next two immunities and by the time they lost the next one, Kim had chosen to stick with the women and went to work convincing Troyzan that Mike was targeting him. Troyzan was paranoid enough to believe it and he and Jay voted against their own numbers. 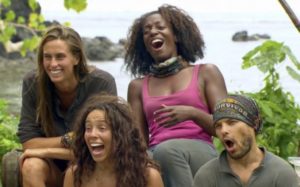 This was where Kim’s true finesse at the game began to emerge. She was so good at convincing players she was aligned with them that by the time they realized she wasn’t, it was too late. While Jay started to wonder if Kim could be trusted, Troyzan still believed that they had made a great choice and told Jay he was being paranoid. Just in case, Troyzan played his idol to protect himself at the next tribal council. Jay was blindsided and Troyzan’s game fell apart in front of his eyes.

At this point, there were still enough stragglers on the outside of Kim’s core alliance that they could have banded together against her, and Troyzan tried everything to rally them. But nobody trusted Troyzan and Kim had done such a great job of convincing the remaining players that they were all going to the end with her that none of them took the bait.

Not only was Kim a social force, she also dominated the game physically. She found a hidden immunity idol that she never needed to play and won individual immunity a total of four times.

There was one potentially dicey moment in between her first and her last two immunity wins. Kat had just been voted out and Kim needed Tarzan to be the next to go. Alicia began to realize that she was not going to be able to beat Kim. Alicia speculated it would be better to go to the end with Christina and Tarzan. In a brilliant social play, Kim managed to convince Alicia that Tarzan was going to betray her and Alicia agreed to vote out her last chance to stay alive in the game.

Kim won the last two immunity challenges and decided to honor her original core three alliance, feeling, correctly, that she would win no matter who was sitting beside her in the final three. Kim won against Chelsea and Sabrina in a 7-2-0 vote.

There is some debate in the Survivor community whether Kim dominated only because of the incompetence of the other players or that the other players looked incompetent because Kim was such skilled player. Kim played one of the strongest games from a newcomer to the game and many say she is the best liar in the history of Survivor. She is consistently voted one of the best to ever play the game, and is a member of the Survivor Hall of Fame, the only one time player to be given that honor. Kim has stated that she would only consider playing again if it were a winners-only season.