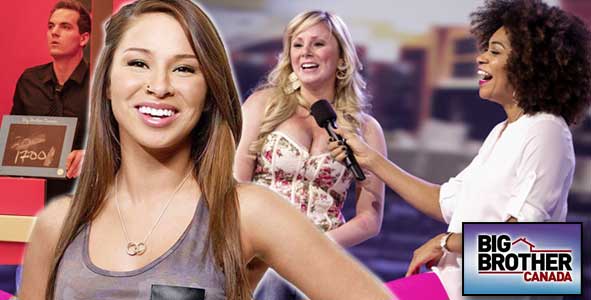 Rob asks Kat about her experience in the game, going very quickly from a player that was under the radar to being on the block and voted out of the house. Kat explains how she very early on noticed that the alliance of Peter and Alec and eventually Tom and Emmett was forming and tried to tell Suzette about what was going on. Suzette didn’t appreciate Kat’s insights and eventually put her on the block. Kat realized that she stood almost no chance against Emmett and chose to enjoy her time for the remainder of her stay in the Big Brother Canada house.

Kat discusses the decision by Quattro to decide to save Aneal from being evicted and voting out Danielle this week. Rob thinks it was a bad decision because Aneal is a really strong player as opposed to Danielle who is less of a threat. Kat agrees and discusses how Aneal was a close ally of hers in the house. Kat feels like the things that she warned about in the first week of the game are coming to fruition with the guys having so much power in the house.

Later in the show Rob and Kat are joined by RHAP Chief Big Brother Canada Correspondent, Brian Lynch to discuss the Big Brother Canada live feeds. Rob asked Brian about what Tom is doing with his HOH reign this week. Brian says that Tom has nominated Gary Glitter and Suzette for eviction and that Suzette is his real target. Rob, Kat and Tom discuss why this seems like a foolish decision for Tom to be making.

At the end of the show, Rob, Kat and Brian engage in a re-enactment of Rob’s favorite scene from the week when Peter got a chance to talk with Marsha the Moose.

Subscribe to Our Big Brother Canada Podcast on iTunes: