Jon Dalton played in the seventh season of Survivor: Pearl Islands, where he immediately became a polarizing character. He is considered by many to be the most villainous player to ever play the game, due to his infamous lie about his dead grandmother. However, many overlook the strategic game that Jon played, to ultimately finish in third place. He introduced himself to his castmates and the viewers as “Jonny Fairplay”, and set about playing a clever and entertaining game that has earned him a place in the Survivor Hall of Fame.

Fairplay returned to Survivor in season 16, where despite setting himself up as a power player and a part of two major alliances, he ultimately asked his tribemates to vote him out, and he finished in 20th place. 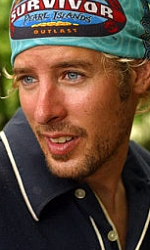 Jonny Fairplay was possibly the first Survivor castaway to begin playing the game before the game even started- guessing that there would be a family visit, Fairplay asked his friend to appear as his loved one, and deliver the false news that his grandmother had died. Fairplay then spent much of the early portion of the game speaking about his grandmother and the relationship that they had. This eventuated into what has become one of the most iconic moments of Survivor.

From the start of the game, Fairplay was determined to be a character, and most of his moves, while also advancing him in the game, were executed in order to entertain the audience. From turning up to tribal council completely drunk, to giving one of the best voting confessionals of all time (“F** you” to Shawn), Jonny Fairplay was always entertaining.

Fairplay found himself placed on the Drake tribe, who were incredibly strong and did not have to visit tribal council until they threw a challenge on day 12. Within the tribe, Fairplay had created close relationships and was trusted by both major alliances. At tribal council on day 12, Fairplay made the decision to vote out Burton, one of the Drake tribe’s strongest members. Soon after this, Burton’s ally Michelle was also voted out. 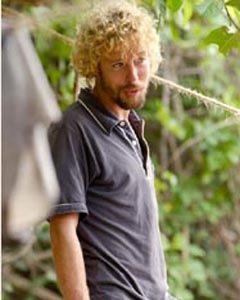 When Drake lost a third straight immunity challenge, Fairplay led a charge to vote Rupert out. However, Rupert and his allies were able to thwart his plans, and Fairplay’s close ally Trish was voted out in a 4-2 vote. As they returned to the beach, Rupert, knowing that Fairplay had tried to get him voted out, was furious, and the two argued. However, Fairplay was able to appease Rupert and regain his trust.

Survivor: Pearl Islands introduced a new twist to the game, one not seen before or since. All the people who had previously been voted out of the game returned as the Outcast Tribe, and from the Outcast Tribe, two were given the chance to re-enter the game- Lillian Morris, and the man that Fairplay had thrown a challenge to vote out, Burton Roberts. Although Burton was angry at being voted out, once again Fairplay was able to appease him and create a strong bond. Burton and Fairplay became close allies, and controlled most of the post merge vote outs. 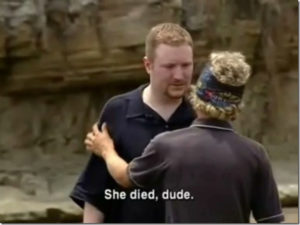 At final seven, the family visit happened, and Fairplay’s plan was executed. His friend “Thunder Dan” came to break the news that Jon’s grandmother had passed away. Out of sympathy, the other castaways allowed Fairplay to win the challenge. As he came back into the camp, Fairplay cemented his status as the greatest villain of all time, laughing “my grandmother is sitting home watching Jerry Springer right now!”

Fairplay’s game began to unravel when the women voted together at final 5, and his closest ally Burton was once again voted out. In order to stop himself from being voted out at final 4, Fairplay worked to create a rift between the women.

At final 3, despite a valiant effort, Fairplay could not win the pivotal immunity challenge, and was voted out of the game by Lillian Morris. In the final tribal council, despite asking Jeff if he could vote for “none of the above”, Fairplay gave his vote to Sandra, who ultimately won the season.

“You guys are dumber than you look.” – Jonny Fairplay

Jonny Fairplay came back to Survivor to play in season 16, Fans vs. Favorites with the well-earned reputation of the biggest villain to ever play the game. Despite this, both alliances within the Favorites tribe wanted to work with Fairplay, and he was not in any danger of being voted out.

After the Favorites tribe lost the first immunity challenge, and tribal council grew closer, Fairplay claimed that his heart was not in the game, he was missing his pregnant girlfriend, and asked to be voted out of the tribe. He has since revealed in post-show interviews that he was struggling with the pain suffered in an altercation with Danny Bonaduce, and had not been given access to any pain medication. Regardless, the tribe unanimously voted for Fairplay, and he was sent home in a 9-1 vote.

Fairplay’s vote out was considered by many as a “quit”, and he was not brought back for any subsequent All-Star seasons. But don’t count on the biggest villain from “old school” Survivor having tapped out yet.