John made a name for himself – literally – right out of the gate. His first day on Survivor: South Pacific, he asked Jeff Probst to refer to him by his last name because he wanted to be considered amongst the ranks of the other Survivor favorites with surname status (Penner, Donaldson, Mariano). From that moment, Cochran solidified his place in the halls of Survivor infamy.

Cochran said in one of his first confessionals, “I am by far, the most Survivor savvy player ever to play the game.” Being the biggest superfan Survivor had ever seen was not all it cracked up to be, however. His keen intellect struggled against his crippling social anxiety. Of the three key skills said to be needed by the best Survivor players – strength, social, strategy – Cochran’s asset was most definitely his strategic mind, something that was much more refined and respected during his second time playing the game, when he won the title of Sole Survivor.

“In all seriousness, he’s behaving like a stupid bitch.” – John Cochran

Cochran’s first appearance on Survivor 23 followed the framework of the previous season: two former castaways – Coach Ben Wade (Tocantins and Heroes vs. Villains) and Ozzy Lusth (Cook Islands and Fans vs. Favorites) – face off against each other while retaining the newly-introduced Redemption Island twist. Cochran opened himself up to derision from the outset by asking to be known only by his last name, to which Probst curtly replied, “We’ll see if you live up, Cochran.”

Early on, Cochran admitted that, “My Achilles heal is crippling insecurity and anxiety.” This definitely played a significant role and was a hindrance in his first season of Survivor.

Cochran quickly found himself on the outside looking in on his Savaii tribe. His encyclopedic knowledge of Survivor did not help him from where he sat on the “Barbie and Ken tribe”. From not wanting to remove his shirt and join his tribe-mates in the water on day one, to being openly ridiculed by Ozzy due to his lack of challenge prowess, Cochran narrowly escaped the chopping block at every single tribal council. 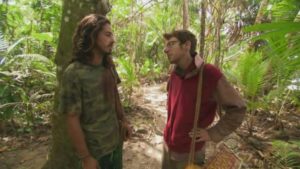 Thanks in part to his secret partnership with Jim Rice, Cochran did manage to dodge the votes during the pre-merge portion of the game. Cochran even found an unlikely bond with Ozzy, when just before the merge Ozzy concocted a bold scheme to voluntarily go to Redemption Island in Cochran’s place to break Christine’s five-duel winning streak, return to the game and keep the Savaii numbers strong.

But the next day, when Cochran’s challenge performance was spectacularly poor, everything fell apart. “This was a new level of ostracism,” Cochran explained in his confessional. But at the last moment, Ozzy had a change of heart and decided to go to Redemption after all. Ozzy even went so far as to give Cochran his immunity idol to convince the opposing tribe that Cochran double crossed him.

Ozzy’s plan was a success in that he was able to defeat Christine in the dual and rejoined his tribe in time for phase two to be put into action. But in his characteristic egotism and short-sightedness, Ozzy failed to understand that Cochran would feel no loyalty to a tribe that berated him at every turn. In a fit of insanity, Savaii intrusted their most despised and ridiculed member to take on an incredibly sensitive and delicate task: to gather information about the rival Upolu tribe for the upcoming 6-6 vote.

The power of Coach Chi

Cochran ultimately turned his back on Savaii. At the merge, Coach saw right through Cochran’s charade and successfully pitched an alternative option for his game, which saw Cochran turn double-agent against Savaii. Coach intuitively recognized Cochran’s susceptibility and attempted to fill the gap that Ozzy had created with the tension and insecurity of the previous 16 days. Was it partially his status as a superfan that made Cochran so vulnerable to Coach’s persuasion? It begs the question, if Ozzy had just been more willing to befriend and mentor Cochran, would the Savaii tribe have made it through the merge? Perhaps Cochran could even have been the Stephen Fishbach to Ozzy’s J.T.

But it was not meant to be. Believing that Coach really would take him all the way, Cochran told the Upolu alliance who Ozzy was giving his idol to, and eventually switched on the revote to send Keith to Redemption Island. Cochran justified his decision to flip by saying that he did not want his fate to be decided by picking rocks, and certainly not for the benefit of a group of people who had bullied him for the first half of the game.

This was a fatal mistake for Cochran. Even if he had managed to work his way into the solid alliance of five and made it to final tribal council, by turning on his former tribe, he would have, in all probability, lost over half the jury votes.

Cochran’s game came to an end just a few days later, when the Upolu alliance had successfully picked off the remaining Savaii members, leaving Cochran as the last person to go before Upolu was forced to cannibalize itself. Upon his arrival at Redemption Island, Ozzy moaned, “Cochran, Cochran, Cochran…why?” to which Cochran confessed, “I drank the Kool-Aid.”

Cochran faced off against Ozzy at Redemption Island and ultimately lost the duel, making him the 7th member of the jury. Cochran was also the only person to vote for Coach in the Final Tribal Council.

“It mentions the weak, so there is a place for me at this challenge.” – John Cochran

Cochran’s second attempt at Survivor just 3 seasons later was a much more successful one. It brought back the Fans vs. Favorites format of half returning players versus half new players. After faltering in the first immunity challenge, the Favorites dominated the first half of the game. 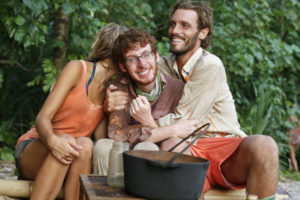 Cochran quickly found himself swept up in the Phillip “The Specialist” Sheppard’s alliance, earning the nickname “Attaché Intelligencia”, yet there was definitely a sense that Cochran 2.0 was a more confident and assertive player than his previous season. Rather having to constantly prove his worth, he was part of an alliance of people who respected his mind and his sense of humor. He openly admitted to his tribe that flipping was not on the table – he was not making the same mistakes again.

At the tribe switch, Cochran stayed on his original beach and formed a tight alliance with Dawn (also returning from South Pacific). Cochran’s game was not as showy, vote-wise, as his first game, as he was finally in the lead role of a strong alliance, and found it was in his best interest to stay the course wherever possible.

Cochran’s motto in Caramoan was all about timing when it came to big moves: recognizing who you voted out was as important as when you voted them out. At the final seven, it was clear that the time had come to make his “big move”. Andrea was desperate to blindside Brenda; Brenda heard about it and was gunning for Andrea; and Cochran was realizing that Andrea was one of the few “independent thinkers” in the game, which made her very dangerous. Not only did Andrea have a hidden immunity idol in her pocket, but she also had final three plans involving Eddie, which Cochran surmised meant that her plans did not involve him. “I want to be part of everyone’s plans,” he explained, “and if I’m not part of Andrea’s plans, then Andrea’s not a part of my plans”. Cochran approached Brenda and Dawn about voting out Andrea before Eddie, and the scheme was formed for a split vote between Andrea and Eddie to cover their bases if the idol was played. Cochran’s last move was to make sure that Andrea felt completely safe before the vote, in a very nuanced and subtle tribal council performance, which evidently worked, because no one was more surprised than Andrea when the votes came up 2 for Eddie, 2 for Brenda, and 3 for Andrea.

Brenda was targeted immediately afterward and then, finally, Eddie (the last of the “Three Amigos”) had his torch snuffed.

Cochran even added a new dimension to his game, that of the unlikely challenge beast, winning 3 immunity necklaces as well as winning the final Reward Challenge to get an advantage in the final Immunity Challenge.

At the final four vote, he opted to take Sherri (a fan) and his ally Dawn to the Final Tribal Council, where he swept the votes 8-0, becoming only the 2nd player in Survivor history to play the perfect game: no votes cast against him throughout the game and a shut out to win the million dollar prize.