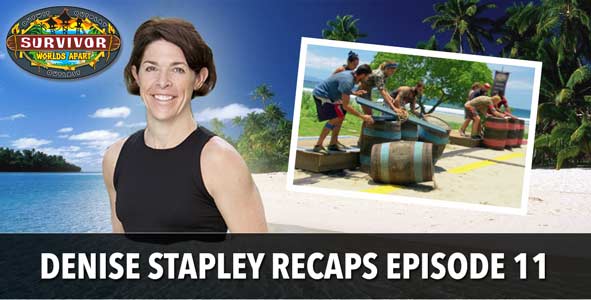 Rob starts off the discussion by comparing Tyler and Carolyn to Denise and Malcolm. Denise says that she had faith they would make it far by laying low and thinks we’ll still continue to see them. Denise says there’s a parallel in that Tyler is the only one that knows about Carolyn’s idol, and that the male in the pair is seen as the bigger strategic threat. Denise does not know why Carolyn is seen as the lesser threat than Tyler. Denise feels Tyler, Carolyn, and Mike have stories and strategies that could win over a jury.

Rob also compares the alliance of Tyler, Carolyn, Rodney, and Will to the alliance of Denise, Malcolm, Lisa, and Mike Skupin. Denise considers Will the Skupin of that group who can’t win. She also can see Will and Rodney in the same position as Lisa and Skupin where they have to choose between bringing Carolyn or Tyler. Denise thinks they will lose to either of them.

Rob asks Denise if Carolyn needs to take Tyler out. Denise says she does need to take him out and thinks she will. Denise says Carolyn has played a smart, quiet game that has not given people a reason to vote her out.

Denise thinks Mike has a great narrative to win. Rob compares Mike’s idol bluff to Malcolm’s bluff during Philippines. Denise liked the move to not play the idol because he needed to keep his safety net. Denise says she never expected Malcolm to play his idol on her and Shirin can’t blame Mike for keeping it.

Denise says it was painful to watch Will’s attack, and no one sticking up for her, from home. Denise discusses how she works with people who have been affected by similar acts as Will’s attack on Shirin. She doesn’t let people get to the point Will did. Denise can’t recall a more personal attack in the history of the show.

Denise and Rob talk about the differences between playing as a man and a woman. Rob and Denise feel women need to lay low in modern reality shows in order to not be seen as targets by the men. Denise feels this is even more important for people in the ‘mom’ archetype and one of the reasons Mama C is doing so well is that she didn’t come in guns blazing.

Denise feels Jeff Probst and Survivor are addressing the issues of the season better than they have been in past seasons.

Denise takes questions from the RHAP community. Do tweets from the #Dirty30 spoil the jury? How do Abi-Maria’s words compare to those from Worlds Apart? Why do Artis and Skupin hate each other? Did Denise watch Sex Box?