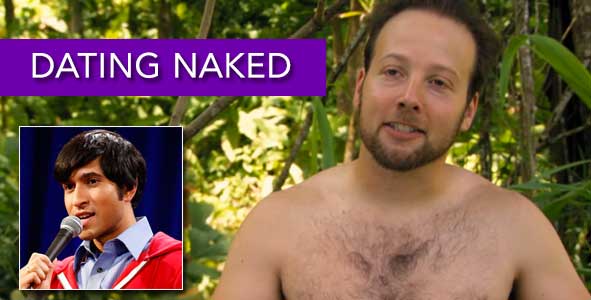 Rob Cesternino welcomes in Steven Brandon, who recently appeared on VH1’s Dating Naked to hear about his experience on the clothes-free dating show.  Then, Mike Bloom joins Rob to talk with comedian Alingon Mitra who is competing to win a spot in the Last Comic Standing Finale via the Comic Comeback.

Steven and Rob have been friends for a few years and Steven is a long-time Survivor fan.  Steven recently went to Panama to appear on the VH1 reality series where he went on three naked dates with women.  Rob and Nicole talk with Steven about his experience on the show and what it was like to actually take part in Dating Naked.

Currently, Steven is working on a live stage show, LOST: The Musical . You can watch his Kickstarter video.

Mike Bloom joins Rob Cesternino to talk with Comic Comeback hopeful, Alingon Mitra who was a contestant on this season of Last Comic Standing.  Alingon tells Rob and Mike how he has won 5 straight weeks in the competition on NBC.com which allegedly will earn him a spot to do SOMETHING on the finale of show.