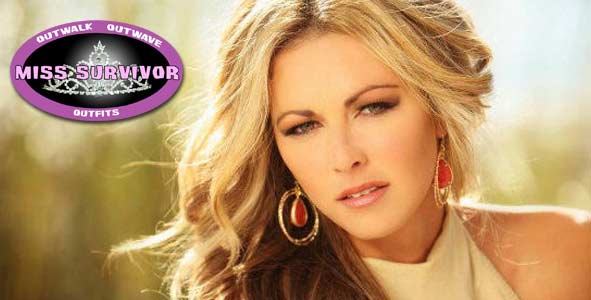 A woman of many talents, Chelsea Meissner

Last week we revealed the three finalists in this year’s Miss Survivor competition – Kim Spradlin, RC Saint-Amour and Chelsea Meissner. This interview is the third and final in our series of talks with the three women vying to be Miss Survivor.

Rob is joined by Chelsea Meissner, the second runner-up of Survivor: One World, to discuss her campaign for the 2013 Miss Survivor competition. Chelsea says she thinks Rob saved the best for last and she is ready to dive in to the competition!. First Rob asks her about her new hair color, which is no longer blonde. She said Kim suggested she go back to her natural color while they were traveling together in Spain, but the Spanish colorist at first turned her hair purple. Although now it’s closer to the shade she wants, Rob thinks it seems like trademark Kim Spradlin– always one step ahead of things and trying to sabotage her prior to the Miss Survivor competition.

Chelsea first gives her opening statement, and Rob asks her if she would like to stand up for it, as she did in her final tribal council appearance. Chelsea said, although it didn’t win her any votes, the jurors told her afterward that they appreciated the gesture. Chelsea then talks about all the charity work she’s been doing, and how she was the top fundraiser for Give Kids the World. Chelsea thinks it would be really cool to have the Miss Survivor title to help her continue with her charity work and get her further away from the “no-votes” title which she feels is a little embarrassing. Rob gives her some consolation that she got more votes than Sabrina in the Miss Survivor competition.

Chelsea says she is ready to take the bull by the horns and win, and get her redemption by beating Kim. In the talent portion of the competition, she demonstrates three skills: playing the spoons on her knee, which she also did on the island, making a loud noise by banging her knuckles on her forehead, and chugging beer– downing a Coors Light Silver Bullet in 9.5 seconds.

After that liquid courage, Chelsea is ready to answer some questions from listeners. Nicholas Porteous asked if the lessons she learned about playing with her head and not her heart have influenced her life outside of the game. Chelsea doesn’t think it’s affected her life after Survivor, because in the game she had to do a lot of things she wouldn’t normally do in the real world. Brian Whitehead asked Chelsea to provide a reason other than her stunning looks why she would be a better Miss Survivor than Kim or RC. She says they are fierce competitors, but Chelsea thinks she has done the most good with the small platform of being on Survivor. She has done a lot of charity work and made a difference in fans’ lives, including inspiring one woman to rekindle her relationship with her father.

The third question is a familiar one– John Radich asked, “Chelsea, why do you hate people?” Chelsea clears the air that she has great relationships with everyone in her cast, and doesn’t know why Christina Cha asked that question in the final tribal council. Chelsea says Christina did apologize afterward, and Jeff Probst also told her not to take that to heart. Jordan Kalish wanted to know what animal Chelsea thinks Kim and RC look like. Chelsea says this isn’t her area of expertise, and she doesn’t want to hurt anyone’s feelings if she tries to answer it. She says she didn’t even know what a lemur was (which is what Kim said RC looked like), and had to Google it. Chelsea does eventually answer, saying RC is a cute squirrel and she agrees that Kim looks like an ostrich. For the last question, Keith Dixon asked why the fans should vote for her to win Miss Survivor if she was willing to give up the win to Kim in Survivor. Chelsea admits she did campaign for Kim in the final tribal council because she felt the odds were against her. But for Miss Survivor, Chelsea feels she has a shot and, regarding Kim, she says “I want to kick her ass!”

In closing, Rob asks Chelsea if she has a campaign promise and Chelsea points out that RC already broke her promise by not wearing the leopard bikini to her interview. Chelsea vows to do a classy Miss Survivor photo shoot with Troy “Troyzan” Robertson if she wins. She also says she doesn’t have a problem with allowing write-in candidates.

Stay tuned for the upcoming Miss Survivor Debate and your opportunity to vote for your winner!