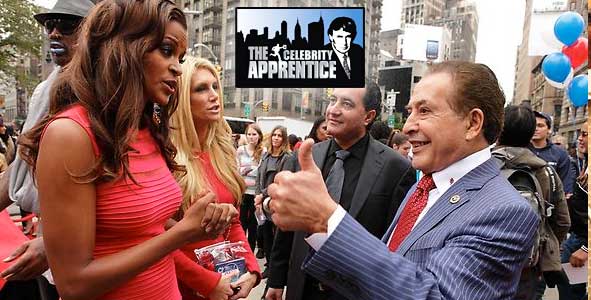 On this week’s All-Star Celebrity Apprentice, beloved Farouk Systems CEO and inventor of Chi styling products, Farouk, returns to the show. Returning as well is Ryan Pappolla to discuss an eventful night on Celebrity Apprentice. For the second week in a row, a losing project manager is fired after not bringing Omarossa to the boardroom. This week it was Claudia Jordan who was fired by making the same mistake Latoya made a week ago. Could the Celebrity Apprentice contestants be suffering from a case of Omarosa-phobia?

After the Omarosa controversy, the guys discuss what a great week Gary Busey had.  Gary revealed his superpowers to be able to visually detect flatulence when he accuses Lina Rinna of farting in the car.  In addition, Gary also served as the team’s accountant.  Gary seemed to struggle during the prop buying portion of the task when he needed to get a “bill of sale” and even thought he had lost the bag of money.

Discussing some of the other players, Rob and Ryan break down the play of Stephen Baldwin.  Ryan is an unabashed Stephen Baldwin apologist, even though Rob is not a fan of Baldwin. Rob thinks that “Plan B” missed an opportunity to make a connection between Biosilk and the classic Stephen Baldwin film, Biodome.

Rob and Ryan also try to determine the Celebrity Apprentice power rankings after four weeks to try and figure out who is in the best position to win this season.  Somehow, Dennis Rodman is extremely high in the power rankings even though he hasn’t done anything on consequence on the show.

Subscribe to our Celebrity Apprentice only feed of Rob Has a Podcast on iTunes: