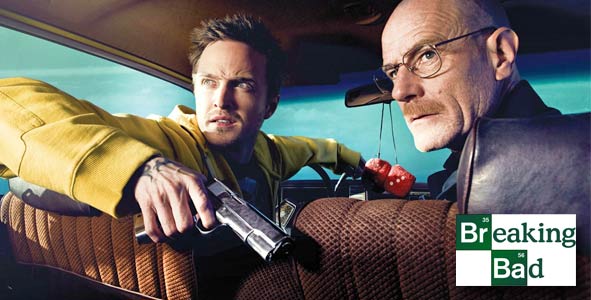 WARNING: IF YOU HAVE NOT SEEN ALL OF BREAKING BAD SO FAR, DO NOT READ PAST THIS POINT

In this podcast, Rob and Antonio discuss their 5 greatest “Breaking Bad” Moments in the history of the show. Rob and Antonio go back and forth revealing their list as follows:

5. When Walter White tells Skyler, “I AM the one who knocks” after she is concerned about him being murdered.
4. The reveal of “The Lily of the Valley” in the season 4 finale.
3. When Gus Fring slits his henchman’s throat with the box cutter in the season 4 premiere.
2. The moment when Walter goes to retrieve all of his cash from the crawl space after Skyler gave it to Ted and maniacally laughs.
1. The moment at the end of Season 3 when Walt kills the two guys who work for Gus who killed the kid followed by Walt telling Jessie to “Run”.

5. When Walt watches Jessie’s girl, Jane, die from a heroin overdose near the end of Season 2.
4. The reveal of “The Lily of the Valley” in the season 4 finale. (Same as Antonio)
3. The scene in the episode “One Minute” when the two cousins are coming to shoot Hank and Hank narrowly survives.
2. When Walter White sends Jessie to go and shoot Gale in the season 3 finale.
1. When Walt rigs Tio’s wheelchair with the bomb that gets triggered by the bell to blow up in Gus Fring in Season 4’s “Face Off”.

Then, Rob and Antonio discuss the big storylines which need to be addressed in the final eight episodes of the series. Plus, Rob and Antonio try to cast “Breaking Bad” with the reality stars from Survivor and from Big Brother.

Join us on Sunday night for our full episode recap of the “Breaking Bad” season 5, part 2 premiere and all season long for our weekly podcast.

Subscribe to Rob Has a Podcast in iTunes (All Shows)