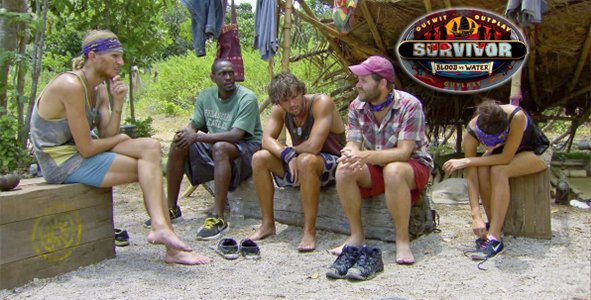 It’s Thanksgiving time, which means I’ll be tucked inside of a turkey carcass for the better part of the day. Before then, I want to talk about what I’m thankful for this year.

1. I am thankful for Laura Morett. She’s a challenge beast and the reigning queen of Redemption Island. Sad as I was to lose Vytas, I was elated to see Laura still has so much fight left in her, both in terms of winning the challenge, and working with Tina to knock out a proven threat. Mom Squad for life.

2. I am thankful for Vytas Baskauskas. Like I said, I’m sad to see him go, but I am so happy to have seen him play. The Baskauskas Bros know a thing or two about how to play Survivor, even if it didn’t quite work out for them this time. But the Smoke Monsterish Vytas will rise again. I am certain we’ll see him play a second season, assuming he’s up for it. Great game, Vytas. Enjoy Ponderosa.

(I am also thankful for “namaste, bitches.” I plan to use that quite a bit going forward.)

3. I am thankful for Tina Wesson, because she was my initial pick to win the whole season, and she’s still kicking, albeit in purgatory. But even in purgatory, there is hope. Keep the dream alive, Tina.

4. I am thankful for Katie Collins and her awesome glasses. As a fellow member of the four-eyed community, I approve of Katie’s fashion choices, glasses most especially. Here’s hoping you rock ’em for several episodes to come.

5. I am thankful for Ciera Eastin and her mischief-making. No, she didn’t do what I wanted her to do this week, but what she did do was stir up a whole lot of drama that made for excellent television. Maybe she’s not the gamer I thought she was, but she’s a hell of a lot of fun.

6. I am thankful for Caleb Bankston, even though it didn’t work out for him. Anybody who opts to bleed all over a challenge rather than throw back some barbecue is a champion in my eyes. Caleb’s quiet edit signaled his eventual demise, but I didn’t see it coming tonight. Give ’em hell on Redemption, good sir.

7. I am thankful for Hayden Moss, because finally, the proven reality winner is showing some teeth. He had fire in his belly at the immunity challenge, even if he couldn’t quite seal the deal. He was confident in conversation with Tyson, even if that didn’t quite go his way. Judging by next week’s sneak-peek, it looks like he’s turning up the heat even more as he targets the Big Bad Wolf. Perhaps it’s too late for Mr. Moss to turn things around, but I’m happy to see him try.

8. I am thankful for Gervase Peterson. The dude just oozes cool and collected, even when his power in the game comes under fire. Gervase played it straight like a boss at Tribal Council, playing his part and keeping Hayden and Caleb comfortable enough that the latter never saw the blindside coming. Maybe Gervase isn’t running the Good Ship Coconut, but he’s the ship’s smoothest operator.

9. I am thankful for Tyson Apostol. It’s a shame he wasted his hidden idol after keeping it so carefully hidden for so long, even if it did create a pretty fantastic TV moment. But he did a commendable job keeping a solid poker face with everyone around him, from Caleb to Ciera. He made his best available move in targeting Caleb, even if the Southern gentleman wasn’t going after Tyson in the end. You win Survivor by making moves based on what you believe the other players’ best moves are, and Tyson did exactly that this week. The Seven wasn’t without some hiccups for the One-Man Wrecking Ball, but he smashed his way to the Six all the same, and remains the frontrunner to win it all.

10. I am thankful for Monica Culpepper. She is, in no uncertain terms, a badass. What I wouldn’t give to see her and Mama Morett in a head-to-head challenge. In a season filled with more athletic alpha males than maybe even Probst can handle, it’s wonderful to watch Monica and Laura absolutely wipe the floor with their “stronger” competitors. If Monica keeps bringing in the immunity wins, and if she makes it to the finals, she’ll have a hell of a case on her hands.

11. I am thankful for Probst, because of his silly little accent during the challenge. That was a first, and it was delightful.

12. I am thankful that the immunity idol was played, because now it’s back in rotation, and that twists up an already twisted season even further.

13. I am thankful for the Blood Vs. Water concept. If Survivor insists on pitting veterans against newbies, I’ll take this version over Fans Vs. Favorites every day of the week. No recruits in this game, at least not in the traditional sense. Every new player has at least a baseline understanding of the game, having lived with a loved one who already went through the experience. The results speak for themselves. We’re at the final six, and it’s perfectly even between returnees and rookies. No matter how it breaks after this, I think it’s fair to say that this season, the new kids on the block actually have a shot at taking it to the top.

Of course, I’m thankful for my family, my friends, my idiot cats … I’m thankful for a lot of stuff that matters on a fundamental, every-day level. But I’ll save those thanks for those gathered around the dinner table later tonight. Right here, right now, I just want to get it out there: I am thankful for Survivor.

It’s easy, popular even, to be cynical about Survivor these days. But in my eyes, after 27 seasons on the air, Survivor remains one of the most consistently thrilling and surprising shows on television. Season 30 is on the horizon already, and there are whispers that it could be the final season of the show. I certainly hope that’s not true. If Blood Vs. Water has proven anything, it’s that Survivor still has juice. Here’s hoping it stays that way for several years to come.