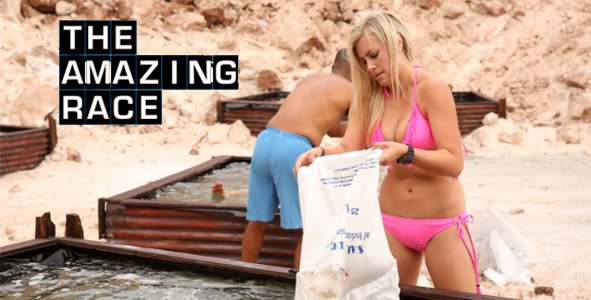 As with last week, this week’s Race was a pleasure cruise for the half of the pack who managed to get onto the right transportation, leaving the other half of the pack to battle it out to avoid last place. This was slightly mitigated by the fact that the completion of actual tasks determined who arrived at the bus station in what order, but it still wasn’t all that exciting to know that the first five teams to arrive in Santiago were pretty much guaranteed to be the first five teams to arrive on the mat.

Do I actually care who ends up getting a six-week trip to some spa in Turks and Caicos? Not particularly. I mean, good for Chester and Ephraim, but we know that three minutes into the next leg, everyone who’s left in the race is going to be sitting together on a line at an airport ticket counter or waiting for a museum to open. Now granted, last week the flights were supposed to land within 30 minutes of each other and the second one was delayed, which the Race couldn’t have accounted for, but there’s no excuse for two several-hour gaps between team packs two weeks in a row. That’s poor planning.

Detour options seemed to be pretty well matched this week, even though my preference would always be for a physically demanding task with a fixed end point over an open-ended task that relied on luck. And Brining was absolutely a task with a fixed end point. Science lesson time, kids. While every body is unique when it comes to buoyancy, it’s your density and not your mass that determines how easily you will float. Being a small, sinewy person means you have less body fat, therefore you are more dense, therefore floating will be more difficult. In other words, had Team Bingo done this side of the Detour, Rowan would have had an easier time floating than Marie or Amy despite the fact that he weighs more. Therefore, declaring that it shouldn’t take long to sufficiently brine your tub because your lady friend is small and will float easily is probably fallacious. Not only that, but the range of buoyancy among all of these teams was probably not that drastic given the size of the tubs. Phil said on Twitter that it would take 33 bags of salt for the water to reach the right saturation point, which I’m assuming probably applied to everyone. Sorry. I’m done now.

At the beginning of the race, Tim and Marie told the cameras that they figured everyone was expecting them to get eliminated because of their constant bickering. Do they actually think the other teams are that stupid, or are they just assuming that nobody else has ever watched this show? Because I’m certainly not seeing this bickering slowing them down at all.

They don’t speak well to each other, but they work well together, because they’re both talking just to hear themselves talk and they know it. Neither of them is taking anything personally. Most of what’s come out of Marie’s mouth thus far has been thoroughly engineered for maximum soundbyte-ability. They don’t care if they hate each other, and they don’t care if you hate them—they’re on TV and you’re not. And despite having to fight it out this week in half of the pack whose placing actually mattered, I think they’re poised to go pretty far.

It’s entirely possible that an ex is actually the very best person to go on The Amazing Race with you. Witness Eric and Danielle in Amazing Race: All-Stars. They had a brief fling during and after Season 9, and the Race loved the idea of casting one sort of Frankenteam consisting of people who’d gotten together because of the show. Only problem? It wasn’t exactly a lasting romance. The scuttlebutt at the time was that they were actually already broken up by the time Amazing Race: All-Stars started. So instead of hashing out their own history or figuring out what lessons could be learned about each other from tasks they had to perform, the only thing they had in common was the Race. So the only thing they talked about was the Race. And damned if they didn’t end up winning the whole thing. I’m not sure they’ve spoken two words to one another since cashing that check.

Not caring about what your partner thinks of you after the Race, especially in combination with not caring what the VIEWERS think of you after the Race, can actually be pretty freeing. Teams of family members often have to level out an imbalance of power. Couples are always wondering if the Race will show them whether or not they should stay together. Even best friends and long-married pairs are always ready to discover something new about their partner. Are Tim and Marie on this race to test out their relationship, or discover something new about themselves or each other? Nope, there’s no reason to. They already know they don’t work as a couple, and who cares if there’s some new side of Tim or Marie that the other one doesn’t know about? If you’re not out for self-discovery or bond-testing, what’s left to do but win a million dollars, split it down the middle, and get on with your lives?

(I’ll be right back. I have to go call up my ex-boyfriends and see if any of them want to make an audition tape with me.)

There is one problem with Tim and Marie’s game at the moment, and that’s their second Express Pass. While it’s probably smart to hang onto the second pass until they spot the prime opportunity to use it, they’re running out of options here. Tim and Marie’s biggest problem is actually that giving away the second pass is going to imply some element of desired reciprocity, and they’ve burned so many bridges that asking any favors from any other teams at this point implies a level of contrition on their part that doesn’t really jive with their image. They said it themselves—they don’t actually need anything from anybody else at the moment. Not good will, not help with directions, certainly not the protection of an alliance. So what’s the point?

It’s entirely possible, after last season and TAR:Canada, that the Double Express Pass is cursed. I’m curious about what would happen if they never gave it away. Would Phil take back both passes? Would he randomly assign it to another team? Would they be allowed to set it on fire? I vote for setting it on fire.

Rowan and Shane looked much better than I’d thought in the first leg, leading me to doubt my initial assessment of “gone in the first three legs.” They seemed to want to chalk it up to a bad taxi driver, but really, a good one wouldn’t have made a difference. If anything, the Bingo boys were actually incredibly lucky, and it was only their extreme incompetence that caused them to snatch defeat from the jaws of victory. Failing to understand the difference between “departing at” and “arriving at” was bad. Kidnapping a poor random working stiff and cajoling him into loaning out his shoeshine stand was just the icing on the failcake that was their race.

It’s looking like most of the rest of my pre-season speculation is backfiring spectacularly. Tim and Danny and Brandon and Adam were two teams I was not optimistic about, but both are showing themselves to be perfectly competent racers. They’re not without their sticking points (so far, a lack of physical strength for the beards and a lack of language skills for the oilmen) but they’re clearly doing much better than I’d predicted.

And then we have the Afghanimals, who I thought would be the charming comic relief of the season, and who I thought I would be rooting for. Instead, their painfully overrehearsed schtick is already wearing on me, particularly their tendency to endlessly mack on every single woman in their general vicinity. It’s mitigated slightly by the fact that Ally and Ashley are taking it in stride, but up until they cheerfully called out, “hello, Race husbands!” I was getting seriously creeped out by the way Leo and Jamal seemed to immediately adopt the Ice Cababes as their property. And even then, I don’t love it.

All of this would even be forgivable if they worked well together and were funny in other ways, but after neglecting to pay their cab driver, they spent an inordinate amount of time yelling at each other on the mat before going back to handle their business. (Probably far more than we were shown, if the abrupt editing is any indication.) It’s always awkward when teams force Phil to referee their fights. Unlike Jeff Probst, who enjoys being an instigator, Phil would really rather everyone just get along and keep him out of their personal business.

The final place where my race radar was off? Nicky and Kim, who looked like they’d be the stronger of the two all-female teams, already seem to be imploding. Nicky’s blunder at the Roadblock almost allowed Rowan and Shane to beat the Bunnies to the mat, which pushed her to the point of wailing about how impossible the task was all the way to Plaza de Armas and back. Remember, fans—THIS IS LEG TWO. There’s less crying in Leg Two than there is in baseball. To say nothing for the fact that they’re relying overly much on alliance-making, as if this is a game where the other teams vote you out. If you do something truly idiotic, having all the alliance-mates in the world is not going to keep you in the Race, ladies. Tim and Marie are probably right to ignore them next week.