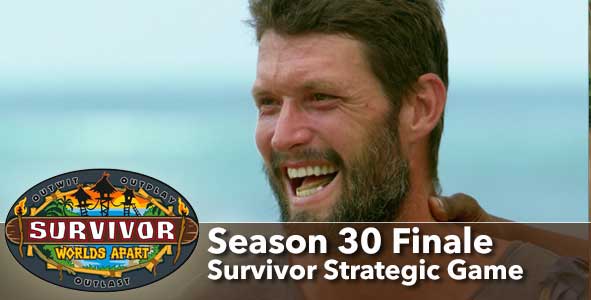 It’s felt obvious since the final nine that Mike was going to win this season. The outcome felt so predictable that I assumed it wouldn’t happen. Many predicted a Jon Misch win last season in the post-merge game, and he went down in flames at the final six. There’s little comparison between the two players, however. Mike was a dominant challenge player who stepped up and barreled his way to the end. The finale was anticlimactic because the contests were so one-sided. The final Tribal Council hinted that perhaps the angry jury would deny Mike the top prize. That was just a smokescreen for his 6-1-1 win, however. Mike’s social game could use some work, but it was good enough to secure the large margin.

It was still an exciting finale, and part of the reason was the tense Second Chances cast reveal (more on that down below). It sapped the energy from the past few episodes but invigorated the fan base, so I can’t complain. Mike’s gritty performance to grab the million was admirable, yet he faced little adversity in the final days. He could set up a fire-marking challenge at the final four and feel confident he would beat either Rodney or Carolyn in the end. That type of comfort is rare. Carolyn was a strong competitor, but she needed an endurance challenge to have a real chance. Balancing objects and running an obstacle course were tailor-made for Mike. Everyone fought mightily to stop him, but the result was inevitable.

Despite the predictable finish, there was still plenty of entertainment within the finale. The jury speeches were fitting for such an uneven season; there were cringe-inducing statements mixed with amazing ones. Mike and Carolyn both made the end, a scenario that seemed impossible after her idol play last week. Dan made lots of angry faces and even slammed his head on the voting booth to get attention. I wouldn’t call that a highlight, but it wasn’t boring. The challenge producers were on fire and created three stunning challenges; there was no lame card-stacking this time. The battles felt epic, even with one player in command. The episode really moved and never felt stretched to reach two hours. In fact, I would have enjoyed seeing a lot more of the final Tribal Council and strategizing at camp. The finale closed out a season that wasn’t as great as Jeff Probst promised but didn’t fail either. 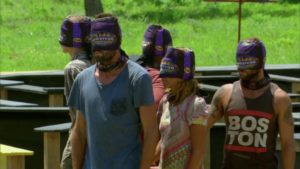 An incredible challenge set the stage for a head-scratching exit at the final five.[/caption]

This season’s editing has undersold Sierra’s contribution and set up Carolyn as the alternative to a Mike victory. Sierra had played a solid game and made few enemies, but she wasn’t considered a prime contender. That edit made the chatter before the final-five Tribal Council a head-scratcher. Mike won immunity, which made Carolyn the obvious mark for the next vote. She was the target at the final six and needed the idol to survive. What changed after that point? This week’s footage didn’t help to explain why Sierra was the bigger threat. I expect that Mike and Rodney were nervous about her friends on the jury. Sierra’s more limited edit was tied to her exit at the final five, but it’s a perfect example of why this season has felt odd. Tyler also received limited attention because he ended up in seventh place. I’m hoping the editors will learn from this season and not show their hand so much next time.

Carolyn’s confidence in the “alliance of four” was baffling. She was their prime target last week yet seemed weirdly unconcerned this time. Sierra didn’t help matters either by selling why she deserved to be in the game at Tribal Council. Her fate was probably sealed at that point, but it was not the right argument. Mike told his mom that everyone came to play this season, but I’m not sure many were playing so well. The editing surrounding this crucial vote didn’t make sense, and part of the reason was the limited time. The long challenges and fire contest limited the editors’ ability to explain decisions. That doesn’t let them off the hook, but it does help to explain why this segment fell short.

Mike’s immunity win at the final five was aided by the advantage that he gained at the reward challenge. I’m not a fan of this device. It gives way too much power to one player and nullifies the tension of such a pivotal immunity challenge. The gigantic maze was an incredible structure, but there was little excitement because Mike had such a big lead. The half-hour with his mom to test the maze gave him an insurmountable edge. Mike did have to win the previous challenge to get the advantage, but he also won time with his mom. I also wish that Mike had been forced to pick someone else to join him. It would have created extra drama because players were so emotional about spending time with their family.

Putting on a Show

I have no complaints about the epic final immunity challenge, which even slowed down Mike while he climbed the massive structure. Rodney made a valiant effort to stay close, but there was no way to overcome Mike’s puzzle mastery. In my notes, I wrote the following after the challenge: “Mike’s plan: eliminate Carolyn and win the million.” Once again, the choice felt cut and dry. Rodney had spent the past few episodes complaining about his birthday and not getting rewards. Who would give him the million? What I underestimated was Mike’s flair for the dramatic. He didn’t want to make the expected choice and remove Carolyn. Instead, why not put on a show for the jury? Mike knew that Carolyn and Rodney would struggle, and he could make the case that he gave them a shot to prove their worth.

Mike had also promised Carolyn that he wouldn’t vote for her, so he might lose her jury vote if he went back on his word. Jury members like Dan and Sierra already weren’t thrilled with Mike, so betraying an ally wouldn’t sit well. That said, I don’t believe that Rodney would have grabbed the million. Jeff’s show of hands at the reunion was suspect because the players have now watched the show on TV. Would Jenn have really voted for Rodney over Mike on the island? I have my doubts. Regardless, Carolyn and Rodney’s failures at the fire-making played right into Mike’s hands. If someone might consider voting for either one, they would think twice after watching such a frustrating challenge.

The final Tribal Council included no opening statements, so we didn’t get a sense of how each player would plead their case. The questions flew by in the limited timeframe, but there were some interesting moments. Hali gave Carolyn the chance to discuss being stereotyped into the mom role, a topic that frequently comes up among fans. Carolyn’s reply addressed her fierce play but didn’t help to explain why she deserved more credit. Even when Rodney asked her about power moves, there was no mention about finding the idol without a clue or turning on Max and Shirin. It may be the editing, but the nuance was limited in Carolyn’s replies. Mike and Will didn’t go any further, however. When Tyler questioned Mike about his poor social game, his answer boiled down to “I sucked”. While that response is better than being delusional, it essentially made the case that Mike wasn’t the best player.

The attacks on Mike seemed designed to raise doubts about the lopsided vote. Dan took vicious shots at his former buddy, yet he still voted for him. Mike’s apology could have played a role, but I’m guessing Dan would have still picked him regardless. I didn’t see Dan voting for Carolyn. Jenn’s rebuke of the jury (“Prove that you’re a fan!”) showed more support, but there was still a lot of anger towards Mike. Tony also faced tough questions in Cagayan, yet he still grabbed the easy win. Both Mike and Tony deserved their wins and watching everyone praise them would be really boring. Shirin earned the final slot with an extended speech that cited Sue Hawk and gave each player significant time. I doubt that nature has ever intended for a howler monkey to eat a stingray, but the reference was nice. Given the season’s wild shifts, having a very entertaining yet odd finish seemed to fit the bill.

It’s been thrilling to catch up with so many interesting players during the Second Chance voting. The social media campaigning was great fun, and it’s hard to complain about the overall cast. I would have loved for Shane Powers and T-Bird to play again, so it wasn’t a perfect group. Even so, the concerns that “casuals” would ruin the day were unfounded. I never would have expected to see Kelly Wigglesworth, Kimmi, Varner, Savage, Terry, Peih Gee, and Stephen play again. The fact that they’re all part of the same cast is mind-boggling. When you add recent stars like Jeremy, Spencer, Tasha, and Kass into the mix, there’s a potential for a remarkable season. There are very few duds in this cast.

I have a feeling we’ll see fan voting again within the next few years. You could feel the energy in the room as Jeff strolled down the aisle and gave the news to each player. The reactions from many were priceless; random duos like Kass and Abi-Maria hugged like they’d been friends for years. Stephen’s frightened expression, Varner tripping on stage, and Peih Gee’s genuine surprise were just a few of the highlights from that segment. It was tough to watch Jim Rice and T-Bird miss out after fighting so hard. It was great to be part of the online fan community during the voting, and I expect that momentum to continue when the season airs this fall. The trick will be avoiding spoilers after shooting ends.

It’s been a thrill once again to blog about Survivor and fail spectacularly at predicting the future. It may be time to delete those blogger prediction posts or risk losing my limited credibility. Regardless, I’ll return for a fourth season of covering the show for this site this fall. I have high hopes about the new cast and expect that we’re in for a real treat. Some fan favorites will probably exit quickly, while unexpected players should emerge and make a serious run. Worlds Apart didn’t entirely deliver, but it was never boring. I expect the same and more from season 31, where everyone is ready to play. The game will move even faster, and players who aren’t prepared for that speed will perish immediately. Ring the bell!