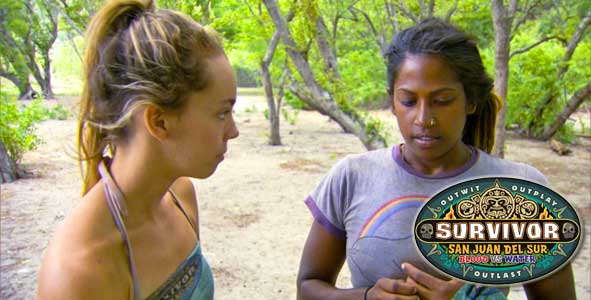 It’s been a bumpy road for Survivor: San Juan Del Sur, but the ending closed the season on a thrilling note. Natalie kept playing hard and made a surprising move that bucked conventional wisdom. Splitting the last remaining pair gave her a better chance to hide despite being the front runner. Each move that Natalie made after Jeremy’s exit set up the board to ensure her victory. There were multiple ways for her to survive at the final four that didn’t involve winning immunity. That’s a rare situation for a player who never led a dominant alliance. There was always a bigger threat (at least in other’s minds) in front of Natalie like Jeremy, Jon, and even Keith. She picked her spots to strike and remained likable right to the end. It’s no coincidence that the last three boots all said “No hard feelings” on their way out the door.

Before digging further into this week’s moves, it’s worth going back to Natalie’s choice to vote out Alec. At the time, it looked smart because it secured Keith as an ally. There was danger if the others turned on Natalie, but she sold it as a mistake. What’s apparent now is how important that choice was for the end game. Having Keith near the end worked because others considered him a challenge threat. If he lost at either the final five or four (which he did), they’d vote out Keith before Natalie. His outsider status also made him dangerous, but that risk was worth taking because he could be a shield. Natalie felt confident she could beat Keith in the end and realized she needed options. Alec could have been a number for the others and a possible goat to bring to the end. Natalie didn’t want to stand out as a threat and couldn’t rely on her bonds to carry her forward. Alec was a dangerous pawn and needed to leave.

Natalie had worked well with Baylor but decided it was time to take her out.[/caption]

It’s easy to sell Natalie’s win as support for the theory that “You have to make big moves!” What is missing in that interpretation is the importance of making the right move. Natalie didn’t play the idol for Jaclyn to show off and prove her willingness to play. Looking good in front of the jury was an added bonus. Natalie could have played it safe and voted out Jaclyn, and few would have complained. The brilliance of her choice was how out of left field it seemed at first. Another factor was ensuring it was clear that Jacyln hadn’t played her. Natalie asked if Jaclyn had voted for the person she told her to, and those words claimed ownership for the choice. It confirmed the jury’s feelings that Jaclyn was a follower and set up the narrative that Natalie was an individual with sole ownership of the game’s final days.

What’s refreshing was the way that Natalie didn’t take offense at Jaclyn’s anger following Jon’s departure. The argument got pretty heated after Tribal Council, and Jaclyn’s main target was Natalie for speaking up about Jon. Players haven’t held grudges during the constant switches this season. Despite being upset about the blindside of her boyfriend, Jaclyn stayed focused and tried to work with Natalie. She deserves partial credit for introducing the idea that spawned Natalie’s move. Once Keith won the ridiculously hard challenge (thanks to a big advantage from the reward), it seemed like Jaclyn was finished. Even when Natalie played the idol, Missy seemed like the obvious target because she’d played a better game. Baylor leaving was a surprise, but it made sense. She was a bigger challenge threat than her mom, who could barely walk. This gave Natalie a better shot to grab immunity and reach the end.

Before digging into the final four, I have to marvel at the grand immunity challenge. The exhausting treks up and down the four-story structure included multiple obstacles just to get the puzzle pieces. Solving the puzzle was the major task, but even that wasn’t the last step. Despite Jeff’s predictable criticisms, Jaclyn overcame a deficit to win the key prize. Keith was the obvious boot given everyone’s concern that a jury with six guys (including his son) would favor him. What made me nervous was seeing Jaclyn and Missy seriously discuss taking out Natalie. I expect that choice would have just swapped places for Keith and Natalie. Even so, Jaclyn and Missy’s chances would have been improved against him. Keith wasn’t a Tribal Council master (“stick to the plan!”) and could have committed a gaffe. On the other hand, this wasn’t a bitter jury that asked the tough questions.

Tribal Council was familiar and gave Natalie and Keith a chance to sell the other’s game. She made the right case that everybody loved him and was surprisingly honest about her own abilities. Despite the hints that a switch could happen, the editors were selling a non-story. Keith would have been an interesting winner because of how little he understood about the game, but his exit secured Natalie’s victory. He probably wasn’t the biggest threat, yet it’s hard to be too tough on the other women. No matter what happened, each had one secured vote from a loved one. The question was whether they could sway others about their strategic moves. It would take a star performance to change the expected outcome.

I didn’t break out the stopwatch, but this felt like the shortest Final Tribal Council in Survivor history. With the exception of Reed’s angry monologue about Missy, the jury questions were strangely brief. Jeremy made the case that “Nat balled out”, but he didn’t match the scale of passionate speeches from Spencer and David Murphy in past seasons. Josh and Jon had similar questions for Jaclyn about her big move, and Keith gave Natalie trouble about her lies. The lack of excitement made Reed’s speech feel out of place and nastier than it really was. It felt mean-spirited because the others seemed okay with asking a quick question and return to their seats. The editing probably condensed a much longer Council, which is strange considering all of Jeff Probst’s wasted time during breaks.

The Final Tribal Council seemed fitting when you consider this offbeat season. There were big moves, fun surprises, and very random moments. Despite having a great winner, it won’t be considered one of the stronger recent seasons. It’s odd because the post-merge game was entertaining and didn’t follow the script. I think the Blood vs. Water format deserves some blame for the jury’s limited questions. Jon and Baylor wanted to prop up their loved ones, and few players approached this game with a real intensity. Natalie played the game as an individual, and that gave her a focus that many others were missing. The two pairs that went the furthest lost sight of their ultimate goal at times, especially Jon and Jaclyn. Despite an entertaining finale and its goofball characters, this season makes me hope that we don’t see another Blood vs. Water season for a long time.

It’s easy to complain about the reunions, which often showcase Jeff’s favoritism for certain players. It brings out some of his worst tendencies, including a need to connect with fans “on the street”. I try to give him leeway since it’s challenging to cover much in such a limited timeframe. On the other hand, this year’s reunion was really frustrating. The only pre-merge player that even received a question was John Rocker. If nothing else, we should have heard what Nadiya thought about her sister’s victory. Instead, Jeff spent more time with the painfully awkward set-up for season 30. Bringing three people out of the audience for the white collar/blue collar/no collar premise was so odd! Was that really better than talking to Kelley or Wes? I keep expecting too much from reunions, and that’s a foolish way to approach them.

Despite its awkward introduction, I’m expecting great things from Survivor: Worlds Apart. The three-tribe format typically leads to great seasons, and I expect the players will know the game better. A cast full of individuals should be refreshing after the emphasis on pairs this time. It’s hard to complain when a show we love is entering its 30th season. Even when it doesn’t completely work, there are still entertaining moments. I was thrilled by Natalie’s win and would love to see her again when we inevitably return to all-star seasons. Her rise in the final episodes helped to deliver a satisfying conclusion.

It’s been a real thrill to write about Survivor once again this season. Thanks to all of you for reading my thoughts and giving your comments each week. Even when you didn’t agree with my predictions (which was very wise), it always led to good discussions. I’m looking forward to returning for a third time to blog about this continually surprising show. Bring on season 30!