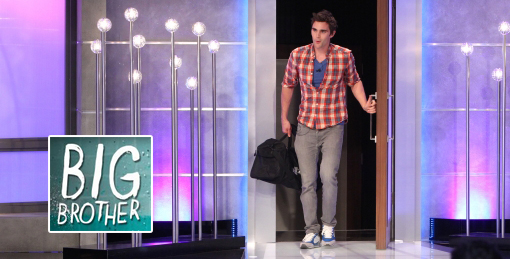 A moment of silence, please, as America mourns the loss of our first Moving Company member. Shockingly, the major networks are not going to air the military style funeral as the other Company members salute Nick’s picture as Lee Greenwood’s “God Bless the USA”: And I’m proud to be a part of the Moving Company/Where at least I know I’m safe/I won’t forget the Moving Company members who died/Who gave that right to me.” Actually, the entire Company may be dead.  And like sounds through the hourglass, so are the days of our lives.

Other than watching somebody randomly trip, there may not be a more satisfying feeling that watching somebody who is over-the-top entitled shocked when something does not go the way they wanted it. That’s what makes this game so great: The power can switch so suddenly week to week.

* Julie Chen: Props to Julie for covering Aaryn’s 1950s racism. Julie clearly is gunning for the Emmy this year for best host, tired of losing to the Amazing Race guy. I also like the random soundtrack playing as we watch Aaryn being offensively horrible. The music would have been perfect for an After School Special about sniffing glue.

* Helen: Her administration takes over at a good time. She has risen from the basement of the Big Brother food chain, much like Eva Peron. Not only is she HOH, but because she has chosen to treat Elissa like a human and not a inanimate object, she probably has the MVP on her side to stack the three nominations. Yahtzee! Although everything looks good now, this is a pivotal choice of whom to target for eviction. Sometimes people in this place try to play it to cute, and it ends up being Step One to their own eviction. Like our modern day Bible, The Godfather and Godfather 2, “Keep your friends close but keep your enemies closer.”  I’m not advocating for Helen to make a blood pact with Jeremy or anything, but if she can’t get him on the block or backdoor him, then trying to make peace maybe a savvy move. By the way, her celebration when she won HOH may have been one of the worst things ever put on TV. It was like the Elaine dance from Seinfeld.

* Jeremy is on the hot seat. The man has gone from the penthouse to the outhouse. To keep with the Godfather theme, I expect him to grab McCrae, kiss him, and say, “I know it was you. … You broke my heart.” Jeremy brought a lot of this on himself with his over-the-top douchyness. He has angered the Big Brother gods and is really going to have to play this week to survive. He has shown the ability to win competitions; winning a veto may be his only chance of survival. That is, unless he can pull a Red Dawn, gather the remaining Moving Company members, and hide in a secret corner of the house for the next forty days. Wolverines!

* Elissa: The weapon of mass destruction is alive and well. She is finally aligned with the power of the house. I hope she won’t “Rachel out” too hard. Elissa actually has an opportunity to build some relationships this week, assuming she gets MVP for the third week in a row). This will be the first week that we actually get to see her play BB without fear of being evicted.

* McCrae/Amanda: America’s first couple continued to beat the odds. They have turned into the quiet swing votes. Apparently, McCrae has taking it upon himself to wear Dudley Doright’s Canadian Mountie hat and get dragged around the house by Amanda. But the man seems to be in a pretty good place for now. He may draw the wrath of Jeremy for being such a pansy, but he doesn’t seem like a target right now. Amanda is lucky that Aaryn played a terrible HOH, because she could have been sent home. She needs to bring some other people in with her and McCrae. It’s tough to tell how this will play out after this week, but she will probably be saved again by bad game play from Aaryn imploding and putting the spot light on her instead of Amanda

* Spencer is tough to get a bead on. We know he thinks he is intelligent. We know he thinks he has control over some of the other players in the house. Wedon’t know his whereabouts when a hobo went missing near his house sometime in 1998. (JK!). If I were in Spencer’s position, I might want to hit the reset  button on my long term plans here. Spencer needs to align with the fringe people in the house–say, a Judd or a Jessie or a Ginamaria. Obviously, it’s slim pickins, but you know he’s playing to the bitter end. I see him getting bye this next week.

*Howard: Howard is so jacked that he doesn’t even seem like he’s a member of our species. I like Howard. He’s a good dude and is trying to play this game with some integrity and honor. He was in a good spot last week, but now that the Moving Company has disintegrated, he’s at risk. He really needs to get on Helen’s good side and align with some new people. It’s tough but, hey, meet new friends, but keep the old/ some are silver and the others gold.  Candice may be his only salvation; they’re getting closer and she does have some sway.

* Aaryn: … how?…why?…what? It’s really jarring that somebody could be this stupid or naive in 2013. When she walks out the door from leaving this game, it’s going to get “real” for her. Maybe it will change her for the better, like Jessica Tandy in “Driving Miss Daisy.” Her HOH reign was pointless. Her side of the house is now weaker and really stupider for having to put up with and listen to her for the past week. She’s this week’s backup target or maybe her mouth will make her the prime target.

* Ginamaria: I have a feeling she’s going to fall apart like Angelina Julie in Changeling, now that Nick got 86’d from the house. When she was hugging Nick, you could see Nick thinking, Restraining order. Every other houseguest was staring at her, horrified and confused. This was maybe the highlight of this week. Her gameplay has been nonexistent. She will be in stiff competition with Aaryn and Kaitlin for “Pawn” of the year.

* Kaitlin is almost as unlikeable as Aaryn, only without all the egregious racism. Kaitlin wearing Jeremy’s lettermen’s jacket was great last week, but now it’s like the scarlet letter, being so shomanced with him. There is not a lot to analyze here, as all she has done is made out with him. Good luck floating and pawning!

*Andy/Judd: Even though they have not been shown as aligned with each other or have any deals cooking, I’m still grouping them together like Riggs and Murtaugh from Lethal Weapon.  They need to join forces. Andy is more aligned with Helen, almost like he’s her chief of staff. Building trust with anti-Helen people will be a struggle. Judd is in a better place. He has a good bond with most, if not all, of the other houseguests. Judd may be able to raise an army of his own with the carnage left from the Moving Company and the Jessie/Kaitlin/GinaMaria/Aaryn group.  But working with Andy potentially could cover all corners of the house without anybody catching on, as neither has that alpha dog look.

* Candice is looking for that all girls alliance, trying to defy science and math, because girl alliances don’t work! Its science! You can’t argue it!  Even though she is intelligent and has her finger on the pulse of the house, she rubs people the wrong way. It’s hard to tell why she rubs people the wrong way, but like Daniel LaRusso, she just does. She is safe this week, though, and maybe if she’s greedy she’ll try to snatch up some former Moving Company members, specifically continuing to build her relationship with Howard.

*Jessie has inherited the David role of possibly not knowing what game she is on. She thinks she’s on The Real World. All she does is lay around the house. Of all the girls going for the floater/pawn strategy, she’s the front runner.

My guess this week: Our nominees will be Howard, Aaryn, and Spencer, with Jeremy as the target for a good back-dooring. Much of the house is in disray, so new dynamics are being made. Its 1985 in Hill Valley, but what reality we are in is yet to be seen.