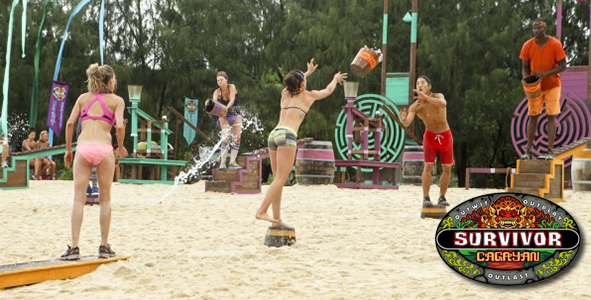 Confessional of the night: “The rain is gnarly, treacherous, breezy. It’s pouring. It’s terrible. But uh, this is what Survivor’s all about, baby! Hopefully, uh, it’ll die down here shortly. If not, it’s gonna be a long night. Woo!” – Woo

There are plenty of reasons why this season has been fantastic. At the top of the list is all new contestants and that a majority of them are playing to win. Although I believe there’s one reason that trumps the aforementioned. Think of every remaining contestant (a few should be excluded and a few are neutral). What qualities come to mind? We’ve seen:

What we’ve seen up to this point has been rare for Survivor. For a recent comparison, think of Caramoan – Fans vs Favorites. We were suffocated with drama and a few grating personalities. Now think about this season and the overall energy we’ve been presented.

The main reason why this season has been fantastic: When contestants have fun playing the game, we have fun watching them play it. 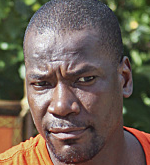 Cliff, look out! A dirty cop is gunning for you. I’m not positive, but I think it’s a case of racial profiling. Those dirty cops always want to bring the successful black man down. Bastards. I’m afraid to say anything.

Ding, ding, ding! I wonder what it must feel like to go through the pains of Survivor as a person with a 0% chance of winning. It has to feel like a mistake and it has to stink. Therefore it’s a— NOPE.

As backwards and cold hearted as this will sound, I’m rooting for Sarah to fail. It’d be a chore for me to root for someone likable, yet too trusting. I can’t do it. Sarah’s one of the best characters this season! I don’t disagree. I just can’t root for her.

Frame Sarah and put her behind bars, Tony. I hate you.

I swear, if you break up Cliff and Woo, I’ll cry. Cry? You’re such a baby. Be ready to get me some tissues, honey. Who the heck are you calling honey?

PS – Jersey City PD is now accepting applications, Tony Jr. Are you calling me a racist?

I loved how Trish was able to find humor in the storm. Getting through dire circumstances with laughter and perseverance is the definition of emotional strength.

But uh, you and Lindsey can leave now. That was rude. I’m being honest. She’s not needed. At least Kass and Tasha would appreciate my honesty.

Did anyone else catch the rainbow during the storm? There was a rainbow? Yes and the rainbow was Woo. Wow, that was corny.

I’m being serious for once. Much like Trish, Woo proved a smile and sense of humor is sometimes all you need during tough times. Okay. I don’t know if I like your serious side.

Me either. Which leads us to…

J’Tia is fascinating. Fascinating? I have a few different adjectives in mind. She’s fascinating because she’s an enigma, a paradox.

Doesn’t this sound like J’Tia? I… I don’t know what to say. Like the dog, I oddly feel bad for her. Not in the pity sense, but in the, aw it was my fault because I shouldn’t have left out the trash sense.

I’m hoping you move onto Kass before I admit I agree with you. That’s all I needed to hear!

Since we didn’t get much Kass this episode, I’ll touch upon the tribe’s water tossing practice session. What the editors did here was comedy gold. I was laughing the entire scene. Kudos to you, editors.

And to you, Kass, I look forward to you being honest with the person on the bottom sometime soon. Are you trying to make a sex joke? No. But I appreciate your mind being in the gutter.

I’m officially on bandwagon Spencer. I hope it’s not too late. Come aboard! All are welcome here. Gee, thanks.

It’s nearly impossible for him to win, but he’s put in a phenomenal performance considering the circumstances.

Something to note is that when it comes to age, Spencer had the largest discrepancy at the start of this game. He’s 21 and Garrett’s the next closest at 27. Meanwhile, Alexis, Morgan and Jefra are 21, 21 and 23 respectively. Then there’s Woo, Lindsey and Sarah, whom are all 29.

While being close in age doesn’t guarantee you an alliance, it certainly doesn’t hurt. You got serious again. Where are the jokes!? No jokes for Spencer. He deserves better.

I’m not a fan of Tasha right now. I can see the cheerleader in her and it’s too much for me. You probably don’t like Tasha because as a woman, she continues to play the game hard. Nope. That’s not it.

She was patronizing towards Spencer when she kept reiterating to him how HE should want to practice for the upcoming immunity challenge. All I kept thinking was, oh go f*ck yourself, Tasha. I hope Spencer was thinking the same thing. Thanks a lot. Now I don’t like Tasha anymore.

I was a little scared you were leaving me. Why do you always write her section like you’re writing to her personally? This is what you do when you’re in love with someone, unromantic part of my brain who pretends to be someone else bantering with me. Knock it off. Seriously. Snap the f*ck out of it!

Alexis did a swell job navigating the split vote. The end.

We can all agree Brice lasting 20% of the season is the first letdown. But we’ll continue to forge ahead, like caterpillars destined to become beautiful butterflies. How original. No one’s mentioning Brice, the beautiful butterfly who’s the talk of the town that won’t remember anyone’s name… hmmm.

PS – I think I should have expected this, but the purple pants I ordered are a little tight.

I wanted to root for Jefra. I did. She’s a lost puppy out there and that’s not endearing to me. Who are you to determine what’s endearing? I said to me. Yeah. Well you’re stupid.

No. I need more from her. Which is another great segue to…

What am I suppose to do with the material Jeremiah is giving us? Tell me! Everything I said pregame is ringing true. He’s a nice guy. Blah, blah, blah. He’s so blah that he’s making me blah. Haha. You’re losing it. I like THIS side of you.

To be fair to Jeremiah, now that Brice is gone, the Beauty tribe as a whole is pretty dull sense of humor wise.

Did you know that some people have sex with horses? What. The. F*ck?

Hey! If LJ isn’t going to be interesting, someone else has to be. You are so weird!

So he doesn’t have much of a personality disorder? Wouldn’t that be a good thing? Crap. No. It should read like: Not Much Personality, Disorder.

Eh. Am I being too harsh? No! I agree. Keep jabbing him! You’re a savage.

Any human that’s attracted to women should have been laughing and pleasantly entertained throughout the challenge. Do you remember any zoomed in, slow motion shots of Cliff or Kass? ….

Exactly! You probably didn’t even remember Cliff and Kass were the pourers for their tribes.

Are you only going to talk about her looks for the entire season?

She’s on the Beauty tribe! What do you want me to do? Plus, the producers and editors are shoving her boobs down our throats. I have no power here. Lord of the Rings reference! Sigh. I should have known a reference was coming.