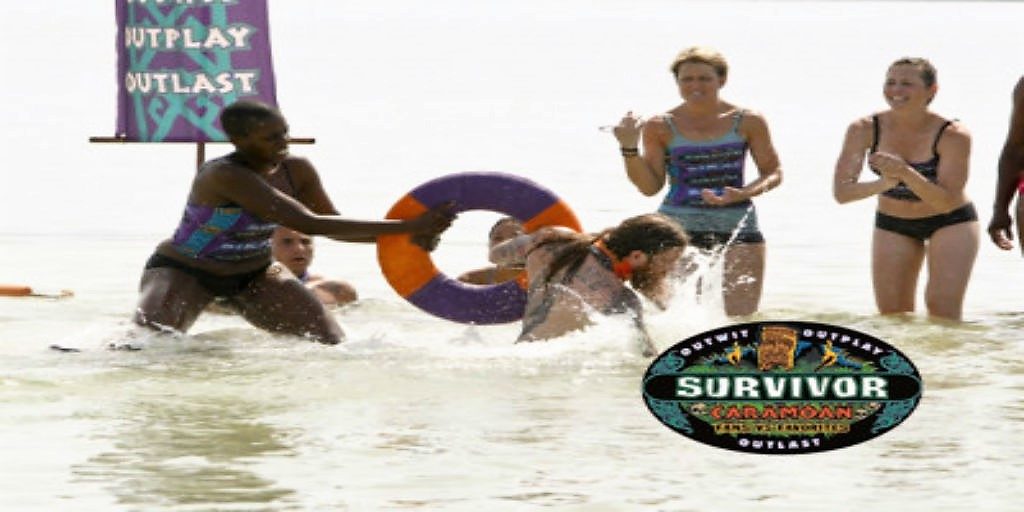 After months of hype and anxious anticipation, the premiere is here! Guest blogger Glenn Holford brings us news of the parallel universe that has erupted on the Caramoan islands.
After 90 minutes of thrills and chills, the premiere of Survivor: Caramoan is on the books, and newsrooms the world over are buzzing. Ladies and gentlemen, we now have an official ruling on the Worst Survivor Player of All Time!

Unfortunately, that means that my first boot pick, the pilous Matt Bischoff, has escaped the first boot slot I’d been preparing for him. I had surrounded his seat with things that would make him comfortable—beard creams, bicycle inner tubes, tattoo magazines and beige cargo shorts. Francesca’s final indignity will be the fact that forevermore she’ll have to occupy this throne. I took the liberty of sending her a box of chocolates to express my condolences. Full disclosure, I ate all the chocolates and replaced them with stones. Happy Valentine’s Day, girl.

Moving on. One of the fun things about the first episode of a season is that you get to see how the tribes gel together. I’ve gotten slightly better at predicting these things over the years, but there are always still plenty of surprises, and Caramoan didn’t disappoint. Let’s take a few moments to discuss the relationships that seem to be budding!

Perhaps the biggest surprise to me came only moments into the premiere, when an elated Brandon Hantz leapt into Malcolm’s arms like he was one of the Navy boys coming back from World War II. Anybody who foolishly believed Malcolm would struggle to make connections in this tribe of Favorites was dead wrong, and that includes me. Malcolm has evidently not gotten over his tendency to choke under pressure in challenges, but his social graces seem to be shielding him so far. Malcolm is safer than I thought he would be. I forgot to account for the wild card that is Brandon Hantz.

Actually, everything Brandon did last night was surprising to me. He seemed relatively calm and poised. He was talking rational strategy. He didn’t pointlessly target a random girl just because of how hot she is. Oh wait. Okay, good, so some things in life do stay the same.
But I do think it’s fair to say that Brandon seems to be playing a much better game, at least so far. Unfortunately for him, he made it deep last time in large part because he WASN’T playing well. I think new Brandon will burn out quicker than old Brandon.

I would be remiss if I didn’t take a moment to discuss that Cochran is really coming out of the gates strong this season. He’s sprawled out on the beach like a sunburned king, while his minions compete for his favor. It’s bizarre to watch, but he’s in a rock-solid position strategically, and he seems to be playing a sexier, more dangerous game. He’s hitting on Allie, he’s letting Corinne bathe him, and he’s making confessionals jokes about New Dawn? Really courting the female vote, there, Cochran. It’s like watching Austin Powers get his mojo back. After his shower scene, I’m sure Herbal Essences is going to ask him to star in their next commercial. Mild-mannered Peter Parker is gone. This is black-suit John M. Cochran.

Also from the realm of the unlikely, comes Phillip’s performance last night. He formed an alliance that seems, ostensibly at least, to control the numbers. He’s managed to avoid explosively mouthing off, and he’s even performed well in the challenges. Do I need glasses, or is Phillip playing WELL?

Well, not really. Phillip seems to think that he’s Boston Rob, and unfortunately he just isn’t. For one thing, Boston Rob would know that Machiavelli never burned down any villages. I don’t know, Phillip, maybe you’re thinking of Sun Tzu or Ghengis Khan or some kind of asteroid. I’m not a mind-reader. I didn’t even know that Survivor was like Iwo Jima! And here I thought that comparison would be absurd and offensive. Phillip, you just take the reins on this one, pal. I’ll follow your lead.

Anyway, the point is, Phillip is overconfident in this game, and it’s going to bite him in the ass. He’s already alerted Erik to begin building a coalition against him, and in the pre-merge, Erik is WAY more likely to stay than Phillip. Like a bull in a china shop, even a well-intentioned and deliberate Phillip can’t help but screw his game up.

Speaking of bulls, we have GOT to talk about the ornery antics of Shamar Thomas. He hit the first challenge like a wrecking ball, proving how physically formidable he is when he throws his weight around. But far from being a big friendly giant, back at camp he showed himself to be short-tempered, pouty, lazy, verbally aggressive, and SUPER sweaty. The fact that he was able to make a fire may have bought him a tiny bit of leniency from the rest of his tribe, but that’s not going to last.

When he’s not pissing people off with his lousy personality, he’s creeping them out by performing bizarre underwear yoga on the virgin shores of the Philippines, flopping around like a beached whale. He’s too volatile. He has no self-awareness. He’s… Wait a minute. Is he…Phillip Shepard?
It seems that alarming parallels CAN be drawn between opposing members of this cast. This Fans tribe looks surprisingly like the mirror universe crew of the Survivor Enterprise. We have Shamar, also known as Goateed Phillip. We have Reynold, who is our showmancing Goateed Malcolm. We have Matt, the heavily-bearded mirror universe version of Francesca. Sherri is the dark side’s version of Dawn. Erik’s doppelganger is Eddie. Brenda’s is Hope. Andrea’s is Laura. Cochran’s evil genius nemesis is Julia. Corinne’s is Allie. Does that mean that Michael is…Brandon? Maybe not. Maybe Michael is just Kirk and Brandon is just an idiot. Either way, let’s not devote any more time to this ridiculous analogy.
The point is, this cast feels very balanced to me, and good casting makes for great seasons. I’m looking forward to seeing these parallel universes collide.
Let me know what you enjoyed about the premiere and what you didn’t enjoy about hearing me talk about it! All this and more, in the comments section below! Well, not more. Just that.