I’ve always been fascinated by how people get on reality shows. The process just fascinates me because I always wonder two things – 1) Why someone would want to be on one? and 2) How does the selection process work?

I don’t think I can come up for an answer to question one because the reason someone applies for a reality show all depends on the type of reality show they’re trying out for and the type of person they are. A “Survivor” contestant is a much different animal than a “Real World” contestant. They’re there for different reasons.

But we can still try to answer question two. From what I know (Full disclosure, I’ve applied to be on “The Amazing Race” and “Survivor” several times), there’s usually an application process and a video involved. Guess what? It’s not too hard to find reality show audition tapes online.

This clip features excerpts of the audition tapes of Jake, Ali, Vienna, Gia, and Rozlyn. Go ahead and watch it. I’ll wait here.

Jake – “I think I’m America’s most eligible bachelor.” Can Jake come across as more of a pompous ass? Granted, we know what the guy is like now so maybe when ABC producers first watched this they saw an interesting guy. Now he just comes across as the used car salesman we’ve come to despise.

Ali – “I love being in love.” Ugh, I just threw up in my mouth a little. This is a clichéd Bach standard line right up there with “I’m tired of the bar scene.” Who the hell doesn’t love being in love?!? Just once I’d love someone to say, “I hate being in love. It’s expensive. Especially around Valentines Day and birthdays.” What a stupid thing to say. But of course, since it’s a cliché its music to an ABC producer’s ears.

Gia – “This is my dog Bentley. Probably the only man who hasn’t hurt me.” First, Gia can’t tell species apart. A canine is not a homo sapien. Secondly, very smooth move Gia. You played right into ABC’s weak spot, the gorgeous wounded woman looking for love. Pfft, as if. Gia’s probably broken more hearts than anyone in. Bachelor. History. Have you seen what she looks like? She’s like a cross between Angelina Jolie and Penelepe Cruz. No one breaks this girls heart.

Rozlyn – “I’m good at doing makeup and I like to make people laugh. I’m pretty remarkable at laser tag.” Say what?!? Those are three very random things. I wish I remembered who Rozlyn was but she does get points for the laser tag comment.

Here’s a more recent Bach audition tape. This is Sabrina Mallah (who I found through Reality Steve). Talk about production value, this looks like it was filmed by Martin Scorsese. Note the playfulness, the intentional self-deprecation, The Lumineers sing-a-long, the “spontaneous” dancing with friends…there’s even a MONTAGE. Sabrina has the one-on-one confessional talk down pat and rarely blinks when looking at the camera. She’s TV ready. Sure, a girlfriend who is completely aware of every camera in a room would be a giant pain in the ass but she was made for the Bach. Sign her up Chris Harrison.

Okay, enough jibber jabber. Let’s get to this week’s episode. As always, be sure to check out the flavor filling links. 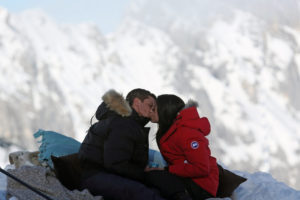 7:01 – 7:02 – If only this show was as good as its previews. During the preview we’re back to hearing Desi use the word “fairytale,” it looks like James is going to get exposed for being on the show just so he can be the next Bachelor, we see Michael doing what he does best (whining) and Bryden looks like he’s finally going to leave. Oh yeah, and we get the classic line “I never thought this could happen” from Desi.

In the span of 120 seconds Desi goes from laughing and being happy to crying like she lost her puppy. Tonight Desi is going to be in a glass case of emotion.

7:12 – The first date of the night is a one-on-one with Chris (not Harrison). But wait, Bryden has decided that while she’s on her date with another guy would be the perfect time to say goodbye. That makes no sense. Didn’t he just get to Germany? Couldn’t Bryden at least have had the courtesy not to interrupt someone else’s date? Looks like someone wants to ditch Des to go check out the local glockenspiel factory.

7:19 – And Bryden shows up to break up an incredibly boring date. Thank goodness. 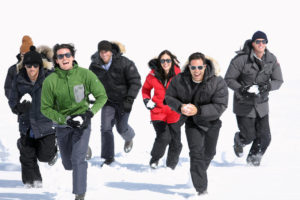 7:21 – Bryden tells Desi he’s leaving. She doesn’t seem that broken up about it. At first. She tells Chris she doesn’t want to talk about it and then they end up talking about it. Desi, to her credit, seems upset more about guys wanting to stick around for the long haul than Bryden choosing to exit. It’s the first interesting (slightly) thing I’ve seen about Desi this season. Either she really is taking this process seriously or Desi just got her ego hurt because a guy wasn’t interested in her in a scenario that is literally built around her. Now that I think about it, I think it’s just a bruised ego.

7:33 – During the evening portion of the date, Chris reads Desi a cheesy poem that brings her to tears. Naturally, he got a rose.

7:34 – And right on cue, here’s a no name guy on a piano singing a song that Chris and Desi are required to dance to. At this point, I’m pretty sure that I could produce this show with my eyes closed. It’s as predictable as the plot of a Bruckheimer movie.

7:37 – The Chris/Desi date mercifully (after almost 30 minutes) comes to an end. Here’s the problem with this date. It was too much like a real date. Minus the “hey one of the other guys I’m dating just broke up with me” thing, of course. I’m being serious. Do you want to watch someone’s actual date? Of course not. Boring conversation, boring activities. Just plain boring.

7:42 – Group date time. The guys and Des are riding up a gondola to the top of a mountain. ABC tries to make us believe that shots from a helicopter are what Desi and the bros are seeing in the gondola but I’m not buying it. 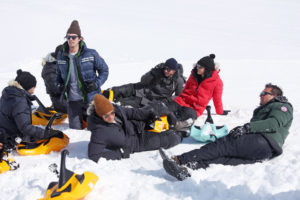 7:43 – JP calls a “yodeler” a “juggler.” Is there a difference? To be fair to JP, in Spanish Js are pronounced like Ys. Or vice versa, I haven’t taken Spanish since college so I could be wrong.

7:52 – Finally viewers get to see something cool! The final part of the group date takes places in an underground igloo, a very large one with hallways and multiple rooms. It looks like the rebel base on Hoth, which for a guy is wicked cool.

7:56 – Mikey T gets his one-on-one time with Desi interrupted by Zak. Mike said Zak was “grinding his gears.” I only mention it because I wanted to link to this.

8:01 – Bad Hair Brooks gets the group date rose. I guess that’s his reward for watching James and Desi make out.

8:05 – Yes! Two-on-one date time! Two men enter, one man leaves! Finally a chance for some drama. Best of all, the two guys on the date are Single Dad Ben and Michael. Oh yeah! My money is on Ben. Michael’s already getting worked up about the date.

8:07 – Says Michael on Ben, “His son was the first thing out of the limo.” Yep, he used the word “thing” to describe a little boy. Watch out Ben, Michael’s ready to throw down. 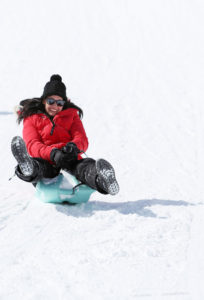 8:10 – Ben, Michael and Desi go on a ride on a cold lake in a Hot Tug. This could be one of the coolest inventions ever.

8:11 – Michael just dropped his third F bomb of the evening. I’m starting to like him more and more.

8:13 – Michael is pulling out all the stops. During the date he asks Ben about his son because he “hasn’t really talked about him much” and then during a confessional calls Ben “an absentee father who mentions his son and uses his son only when it serves him.” He also digs into Ben’s relationship with his son’s mother. Whoa! Michael is pushing hard, the only problem is he might be making Desi so uncomfortable it ends up backfiring and she picks Ben.

8:19 – Meanwhile, back at the hotel… Drew and Hashtag Kasey are talking to Chris and Brooks about how Mikey T and James aren’t really around for the right reasons. They said they overheard them talking about taking women out on a boat and hooking up. James was overheard (allegedly) that if he makes it into the top four he’d have a good shot at being the next Bachelor. A couple quick things on this:

2)    How many cameramen are on this show? Not one of them caught this alleged conversation between Mikey T and James?!? You know those mic packs are on them all the time. That never got picked up? Come on ABC, give us the real dirt.

8:20 – Back at the two-on-one date, Michael continues to make things uncomfortable. He’s trying very hard to show Desi what a fraud Ben is but again, I think its flying right back in his face because he looks like a jerk. 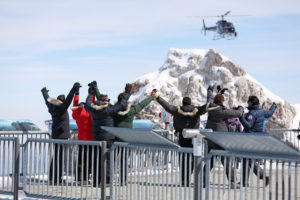 8:28 – Ben, tired of being ragged on, leaves the dinner table. Michael, probably too late, realizes he screwed up. Desi goes out to check on him, leaving Ben able to play the Wounded Father card. So, yeah, Michael’s plan didn’t work.

8:30 – To her credit, Desi is questioning why a guy like Ben isn’t liked by all the other guys, a classic Bachelor warning sign. But will she fall victim to the traditional Bachelor error, keeping the wrong guy?

8:33 – Whoa! Michael gets the rose! I’m super surprised! I guess the fact that the other guys in the house didn’t like Ben was a very bad sign. That said, I don’t think Michael has a shot.

8:44 – This show loves simple foreshadowing. During a one-on-one chat, right before the cocktail party, Desi says to Chris Harrison, “I feel great about the guys that are here. I feel that I can trust them.” Cue James getting thrown under the bus.

8:47 – Uh oh. Desi just told Chris Harrison that she knows what she wants to do and doesn’t want to have a cocktail party. How will Drew Do-Right tell her about James?!? 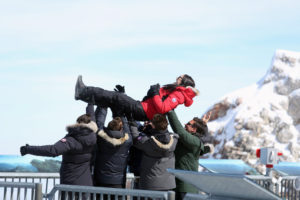 8:56 – Gah! Both drew and Kasey have both been given roses. There’s one rose left, it’s between Mikey T and James.

8:57 – And James gets the last rose. Drew is turning into the new Michael as he says that James is an “immature, shallow, materialistic piece of (bleep).”

Final thoughts – Good episode. As usual this show is at its best when the bachelors/bachelorettes go at it with each other. The person who is the actual Bachelor/Bachelorette isn’t the star of this show. It’s the contestants that make it worth watching…I’m very surprised Michael was not sent home. Usually the guy who complains a lot about other people doesn’t make it too far. Women like aggressive men, but they don’t like mean ones…There’s a casting event in Denver on July 13. I swear I’m going. For research purposes.