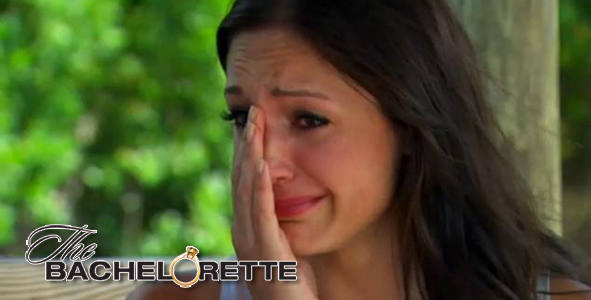 Before we get to this week’s episode I wanted to discuss last week’s Men Tell All Episode. At least I would if I could remember anything relevant that happened. Oh yeah, now I remember.

Chris Harrison gave HUGE hints that Juan Pablo would be the next Bachelor, Zak tried very hard to appeal to my good friend Lacey Pemberton to take the job away from JP, and the preview for the drawn out finale happened. 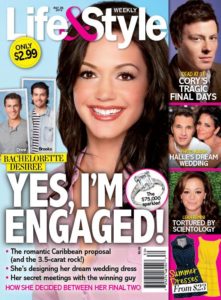 There’s only two reasons why Harrison was giving JP so much air time – 1) he’s trying to get the viewing public a chance to get to know someone who received even less air time than he did or 2) Harrison has a man crush on JP. Either way, we all know Zak’s I’m-just-a-sweet-Texas-boy-with-a-broken-heart-who-writes-sad-country-ballads act isn’t swaying Harrison. The Hardest Working Man in Hollywood has been fooled by Texans before, he won’t be Womacked again.

As for the preview for the last two episodes? I thought it clearly pointed to Desi ending up alone. Then I saw this magazine cover (to the right) at the grocery store and my supposedly brilliant theory that Brooks got cold feet and she rejected Chris during the final rose ceremony after Drew pulled out fell apart. Damn ABC producers and their clever editing.

Okay, enough jibber jabber. Let’s get to the most. Dramatic. Episode. In. Bachelorette. History.

7:01 – During tonight’s preview we’re given the same tease as last week. Desi’s crying and says she wants to go home. What are the chances ABC pulls a cliffhanger and drags the heartbreaking part to next week? 50%? 75%?

7:03 – During a season recap we get a look at Bryden. Why didn’t he get a chance to speak during the Men Tell All episode? I would have liked to hear his point of view.

7:10 – This season recap is awfully long. It’s what we in the biz call “filler.” This is why the season finale was broken into two parts?!? So we can hear more of Chris’ poorly written poems?!! So we can be reminded how boring Drew is?!? So we can look at Brooks’s greasy hair and wonder why he won’t get a haircut so he stops looking like an NHL player?!? All this recap is reminding me of is that there are NO dudes from this season that I’d be interested in seeing as the next Bachelor.

7:14 – Desi and her dudes are in Antigua. First up is Drew. This week is the fantasy suite dates. I’m pretty sure this is when Drew talks so boringly in Desi’s ear about how much he loves her that she falls asleep in the fantasy suite.

7:17 – Says Desi as she and Drew are walking around a village, “I think Drew loves life.” Hmm, I guess that Goth vibe he’s giving off is lost on Des.

7:20 – It took me 10 episodes to realize it but I just figured out who Drew reminds me of, a Ken doll. He not only looks like it, he’s about as interesting as one (to an adult) as well. Hopefully Drew’s not as deviant as the creator of Ken otherwise the fantasy suite might take on a whole new meaning.

7:31 – Drew and Desi go to Makeout City during their time in the fantasy suite. Time for Desi to get the milk for free. To kick the tires. To see if Drew’s actually not like a Ken doll and is anatomically accurate. Hopefully Drew is able to rise to the occasion unlike Ed during Jillian’s season. And that’s my sexual innuendo paragraph for the week.

7:35 – Uh oh. We’re getting up close and personal with Brooks. Brooks is getting cold feet about going to Antigua and is talking to his family. Is this why Desi was crying in the intro? I guess Brooks’s other wives didn’t approve of Des after meeting her during the hometown visit.

7:47 – Time for Chris’s date. He gets to go on one of the few helicopter rides we’ve seen this season. ABC is still recovering from Bachelor Ben Flajnik’s destruction of the heli budget during his season.

7:54 – 8:04 – There was some really annoying background noise during the evening part of Chris and Desi’s date so I muted the TV and created my own dialogue:

Desi: Thank you. You look nice as well because you look like every other guy in the world.

Chris: Thanks. I’m going to read you a poem. Here goes. “There once was a man from Nantucket…”

Desi: Wow, I did not expect that. Oh lookie! A note from Chris Harrison, lets go to the fantasy suite and reenact your poem verbatim.

Chris: What does verbatim mean?

Desi: I don’t actually know. I heard it on an episode of “Jeopardy” once. I like to use it sometimes to make myself sound smarticle. I thought you’d know what it means. But who cares? Lets go make out in the hot tub and please forget that I slept with Drew last night.

8:08 – Desi is talking about Brooks. She more or less says she that while she likes Chris and Drew, Brooks is the one she wants. Time for Brooks to rip Desi’s heart out Temple of Doom-style.

8:13 – 8:19 – Brooks has a long chat with Chris Harrison. The dude never says the words but he basically states that Desi is not the girl for him. I gotta give the guy credit, a lot of the time people just get sucked into the atmosphere of the show and carry on anyway. But it looks like after spending some time at home that Brooks realized the impact of what he was doing and just didn’t have the heart to fake it. Good for him.

8:24 – Brooks and Des are about to meet. Get ready for the most awkward. Conversation. In Bachelorette. History.

8:25 – Says Desi during her pre-date (or breakup) interview, “Brooks has always been a frontrunner. I’m in love with Brooks and I miss him every day that I’m not with him. If Brooks got down on one knee and proposed to me I would definitely say yes.” Okay, okay, ABC! Brooks is about to crush Desi’s heart with a wrecking ball. We get it, we get it!

I understand the need for ABC to tell the Bachelorette that they aren’t allowed to say they have stronger feelings for one person than another, but when it comes to building a real relationship, that’s kind of important. How do they get around that? Editing maybe? I don’t know. Either way, that might have had an impact on Brooks’ feelings. Maybe if Desi could have said how she really felt, it would have made a difference.

8:45 – Well that was awkward. I can’t believe I’m saying this but Chris Harrison was telling the truth last week, this was the most dramatic moment in Bachelorette history.

8:53 – Desi and Brooks hug goodbye and their mic packs pick up one of their heartbeats. Now that is quality work by the sound department. Or a cheesy add-in sound effect.

8:59 – Says Desi, “It breaks my heart knowing that I have two amazing guys that do want to love me and that do love me. But I just can’t love them as much and that’s not what they deserve.” It’s pretty clear that either Drew or Chris is Plan B. If I’m either of these guys watching this and I’m now with Desi, I feel like a chump.

Final thoughts – It’s hard to separate Desi’s real emotions from being dumped and her embarrassment from being dumped on national TV. Both are pretty horrific…Isn’t it better that Brooks dumped Desi now instead of a couple months after the show aired?…So how is Brooks going to be received after all this? As a hero for doing the right thing or as a villain for breaking Desi’s heart? I’m not sure…I think Chris is the new frontrunner. He seems like a better fit for Desi than Ken, er, I mean Drew…I look forward to seeing Brooks on the next season of the Bachelor Pad…Wouldn’t it be awesome to see Brooks next week come back and say he changed his mind? That would really mess with Desi’s head. Now that would be the most dramatic episode in Bachelorette history.

See you all next week for the finale!