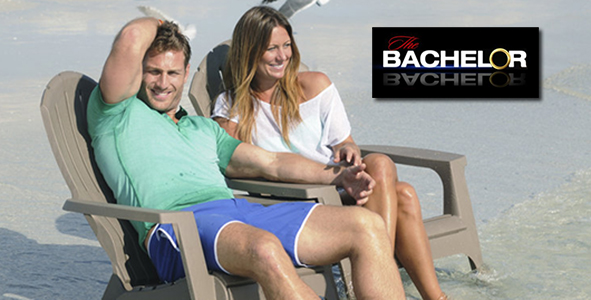 Another week, another episode of America’s favorite guilty pleasure, “The Bachelor.

I’m not really sure why we’re getting two episodes back to back this week but this will be the first of two posts. I’m guessing it’s because Chris Harrison asked the Bach producers to speed things up because he needs a vacation after the headache of trying to translate Juan Pablo gibberish into English.

Speaking of CHarr (that’s my pet name for him) I listened to a podcast with him and Juliet Litman from Grantland. It’s called “The Juliet Show” and posted Monday; it’s worth a listen. I retweeted it late Monday afternoon so you can find it via Twitter pretty easily.

So what info could be gleaned from this pod?

Okay, so I made that last one up but it’s probably true anyway. The interview was short, only about 25 minutes long but I liked Harrison, he even reminded me a bit of Jeff Probst but with less ‘tude. CHarr seems like he’d be a good guy to have a beer with, just keep him away from your girlfriend.

7:02 – The previews for the hometown dates look good. Looks like nobody has a good time. DRAMA! Now we’re talking! Unless this is just clever editing.

7:04 – Nurse Nikki has the first hometown date. She’s from Kansas City so that means there has to be a BBQ reference, right?

7:05 – And now they’re eating BBQ. Next they’ll go to another famous Kansas City landmark…um, Arrowhead Stadium? Is KC really known for anything else besides the Chiefs and BBQ? Should be a short visit.

7:08 – Nikki says to the camera in a one-on-one that she is totally in love with Juan Pablo. Why?!? We’ve seen nothing to prove that these two have any kind of relationship. The same can be said for JP with any of these women, except oddly enough, Clare. And that’s mostly because Clare truly acts like she’s JP’s girlfriend, but that’s probably just all in her head.

7:13 – Time for dinner at Nikki’s house with her family. These people seem normal. What is their daughter doing on this show?!?

7:19 – Nikki’s hometown date is over. That went much too well. It was so sweet I think I now have a cavity. If that cool preview was all editing and these hometowns went fine I’m going to be pissed.

7:24 – We’re now in Andi’s hometown, Atlanta. Says the Mrs., “I think she’s going to be crying by 7:35. She cries every episode.” I think she complains every episode, not cries but we both agree Andi is a bit of a whiner. And probably the next Bachelorette.

7:27 – Andi takes JP to a gun range. Andi’s whole attitude about it is really off putting. Says Andi, “You want to prove your manhood in the south, you go to the gun range. I can’t bring him to meet my family without a bull’s-eye.” She’s saying this seriously. Really? That’s going to be your criteria on what makes a man? Do water guns count? Airsoft guns? I guess my collection of action figures would eliminate me from contention if I were a bachelor on Andi’s season.

7:31 – Just saw another M&M commercial with Juan Pablo. JP can’t act but at least it’s much better than the Rochester Appliance commercial.

7:33 – Time for dinner with Andi’s family. It’s clear early that Andi’s dad is going to be a problem for JP. Maybe Juan Pablo can grab his face, say “look at me” and then kiss him and that’ll calm him down.

7:36 – Andi’s dad’s name is “Hy.” For a guy with that name he isn’t being very friendly to Juan Pablo. The dude and his eggplant shaped head is not being particularly hospitable. Of course, neither would I if Andi was my daughter. I’d be sitting with a shotgun in my lap the whole time.

7:45 – And here’s the big moment teased in the preview – Juan Pablo asking Hy if he could accept him and his daughter if he asked Andi to marry him…AND BAM! Hy shuts the door on him and says because JP is dating three other women, he wouldn’t answer the question until Juan Pablo tells him that Andi is the only woman for him. That is actually pretty reasonable. Where’s the drama?!?

7:49 – Andi isn’t getting much reassurance from her family. Both her dad and sister aren’t ready to dive in head first with this scenario, which is raising doubt in Andi. Good for them. Isn’t this what a family should be doing with a situation like this, especially if they don’t see something special when they see the couple together? I would hope so. It makes Andi think about where she really is in the “relationship” and it reminds Juan Pablo that his actions have an impact on other people’s lives. Or at least it should.

7:57 – Time for House Mom Renee to get a visit from JP in Sarasota, FL. Of the four remaining women, I think she’s the one most likely sent home. Renee is starting to give off a desperate vibe.

7:59 – Renee introduces her son Ben to Juan Pablo. Ben is still waiting for his mother to explain where the hell she’s been for the past two months and who this weird talking guy is.

8:02 – Okay, now I just saw Juan Pablo and Chris Harrison in a promo for the “Need for Speed” movie. What is going on?!? How in the world did a guy who speaks so little English became the biggest pitchman in Bachelor history? He hardly even says anything in his commercials either! I just don’t get it. If anything, this season of the Bach should have shown everyone what a one-note guy JP is. Instead he’s turned into the Venezuelan Alec Baldwin. What gives?

8:06 – Dinner with Renee’s fam. Time for them to be bedazzled by JP’s constant hand gestures he uses while talking. Hopefully he doesn’t accidentally hit anyone in the face.

8:08 – Says the Mrs. about Renee, “She looks like Marsha Brady.” Hopefully Renee’s sister Jan doesn’t show up and ruin everything.

8:11 – Much like Nikki earlier, Renee says she’s madly in love with Juan Pablo. I’m still left wondering WHY!?! Where’s the connection?!? I have a deeper connection with my aforementioned action figure collection than Renee does with Juan Pablo.

8:13 – The wife just pointed out that we were never shown any conversation between JP and Renee’s mom and dad. That could be a sign that she’s a goner.

8:17 – JP is now in Clare’s hometown, Sacramento. Clare is in her element, which means getting to monopolize Juan Pablo’s time and talking incessantly.

8:20 – Clare is talking about her dad. This sounds heartless but I just can’t buy what Clare’s selling. Everything she’s saying sounds completely rehearsed, like she memorized lines from a Lifetime movie.

8:26 – Dinnertime. I just learned that Clare is the youngest of six daughters and she has one brother. Yikes! That’s a lot of family embarrassment when the ocean coitus episode airs.

8:33 – Uh oh. Clare is sitting and talking with her sister Laura and her mother. Clare’s sister says that she doesn’t think the family will give their blessing to her relationship with JP. We all know Clare doesn’t like to be told no, so she starts the teary-eyed BS emotional shtick that she usually does, however, Laura is having none of it. It’s a really weird situation but here’s my take – Laura knows what kind of person her sister is (manipulative and sneaky) and she doesn’t want Crazy Clare sweet talking her mom into saying she’d be okay with her getting engaged to Juan Pablo. Or these two just have a sibling rivalry and can’t stand each other.

8:41 – Juan Pablo wants to talk to Clare’s mom, so Laura decides to jump in on the conversation. What’s going on here? Is Laura her mom’s translator? I haven’t heard mom say anything the entire time.

8:43 – And that’s pretty much it. Clare’s mom speaks pretty decent English but it’s clear Spanish is her first language.

8:45 – Clare’s family visit is over. If I’m JP all this family drama has to be a bit of a red flag. Of course, if I’m JP all I’m thinking about is getting some besitos before I leave.

8:46 – And for the fifth time tonight Clare cries. I’m not sure why. Clare cries more than Jesse Pinkman and Carrie Mathison combined.

8:50 – Back in Miami for the final rose ceremony. FINALLY. If I have to listen to another Clare cliché I’m going to punch myself in the face.

8:52 – Each lady had a short soliloquy about their hometown visit, except for Nikki. That leads me to believe she’s safe. I think Renee is going home. It’s clearly not Andi because we’ve seen her in the preview for tomorrow’s show. Nice job with the spoilers ABC!

8:55 – Say what?!? Chris Harrison just came out and reminded the group that there is one rose left. He didn’t do that last week so why this week? I guess CHarr has properly recovered from his hangover and remembered his cue.

8:56 – And Andi gets the last rose. Judging from how she reacts in the preview for tomorrow’s episode, she probably wishes she didn’t get it.

8:58 – Renee pulls a Double Pappas in the limo ride home. She didn’t really seem that surprised or disappointed she was being sent packing.

8:59 – Now real tears are falling for Renee. She wiped her face so hard actual tears came out.

Final thoughts – Besides the grab-your-face-and-make-you-look-at-me move, JP has also developed the turn-my-head-and-make-myself-cry-when-I-eliminate-a-bachelorette move…I feel betrayed by the pre-show preview. I expected some hometown drama and we didn’t get that. If this show was half as good as the previews, it would be so much better…I SWEAR during one of the previews for tomorrow’s episode that Juan Pablo told Andi, “You barely made it here.” If he’s referring to her barely making the top three, that’s a HUGE insult.

See you all tomorrow!