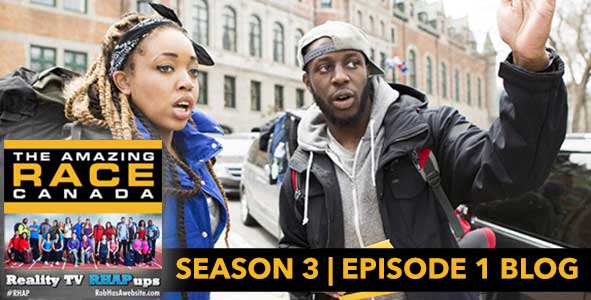 Welcome back and bienvenue à nouveau, Canadian race fans! We’ve returned for a third season, and things are definitely feeling positive. In my estimation, the editing of the TAR: Canada premiere was very much focused on looking forward, and on forward momentum, rather than trying to craft a narrative around failure. The pacing of this episode, right down to the drawn-out team introductions and the abbreviated mat check-ins, felt very much like an early season of its U.S. cousin, maybe one from back in the early 00s when basically everything about TAR was perfect. Amazing Race: Canada frequently reminds us what this show can be when it’s firing on all cylinders, and this premiere was no exception. 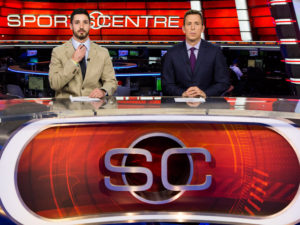 Which isn’t to say I think we’re in for a 100% perfect season that lives up to all of our expectations. (Do Seasons 1 or 2 meet that description? No, not really. And we loved them anyway.) The thing I feared might happen definitely happened in episode one: Gino and Jesse demolished the competition to hit the mat in first place, and it wasn’t even close. Now, I don’t DISlike these guys, but if we are being set up for a season where it’s their race and the rest of the teams are just along for the ride, everything else is going to have to be twice as entertaining in order for this Race to be fun to watch.

Fortunately, the rest of the teams DID manage to switch up the order quite a bit, which made for compelling television despite an anticlimactic front end. Nic and Sabrina, who started out the leg by getting lost and winding up half an hour behind everyone else, overcame a slow start and a crippling phobia to work their way up to second place by the end of the leg. In third and fourth we had Brent/Sean and Hamilton/Michaelia, both of whom also spent the first half of the leg at the back of the pack.

A common complaint among TAR viewers is that too much bunching ruins the race. And yes, used improperly, it can sometimes give a few too many second chances to a team who’d otherwise be cannon fodder, at the expense of potentially great racers’ games. But who could argue against the use of bunching after watching this episode? Since the action paused until the second flight could kinda-sorta catch up to the first, everyone had a fighting chance, and both first and last place were ultimately probably still the same as they would have been had the four back-of-the-pack teams been the only ones battling it out for last…but with the added excitement of watching teams go from first to last and last to first. (And, of course, one team sliding down to last on the back of one bad challenge and pretty much staying there.)

I don’t think there’s a specific lesson we can take away from Malias’s early exit. This was down to bad luck more than anything else — they had no way of knowing the dyslexic team member was signing on for a reading Roadblock. Any of us, were we running the race with a partner who is a professional athlete, would have made the exact same call when faced with a Roadblock that asks which one of us is feeling sporty.

Max and Elias probably weren’t going to win this race, but I do think they had the potential to be big characters. The reasons they were cast were pretty obvious even in the few minutes of them that we got. I do have a feeling that this defeat isn’t going to break their hearts, though. Their website profiles suggested that they were bigger fans of the show than we might have guessed, but I’m guessing this race didn’t necessarily represent a lifelong dream fulfilled for them. They’ll be just fine.

Brent and Sean, who probably would NOT have been fine had they gone out like that, might be our “wonder twins” of the season. They’re just a little bit too similar for their own good at the moment, which led to a moment where neither of them had heard of TSN, and neither of them is great under pressure, which led to them not being able to redirect their cab once they realized they were lost. I hope at least one of them figures out how to course-correct, because with Max and Elias gone, they might be our best hope for big characters this season.

Obviously, watching Neil five-hole the sportscasting challenge was another memorable blunder. (Just in case there are any total newbies joining us here at RHAP for the first time, a “five-hole” is when a Racer completely fails at a challenge that’s closely related to something they’ve done for a living. You can probably guess that it’s named for hockey gold medalists Meaghan and Natalie’s utter failure to sink a puck into the five-hole in a hockey-related challenge last season.)

You might be thinking that Sabrina’s water-related meltdown constituted another major error, but I’m actually thinking the opposite. In season one, Vanessa and Celina had a very similar first episode — for a hot second, it looked like a crippling fear was going to end their race early, but then, as now, there was a lot of buildup to what amounted to a pretty quick resolution. Like the sisters in season 1, Sabrina proved this week that you can absolutely go on this show with a phobia as long as you’re willing to push through it. She wasn’t thrilled to jump into the water, but she knew it was necessary, so she did it anyway. Between that and Nic’s quick work of the sportscasting Roadblock, Nic and Sabrina both impressed me this leg. I think they’re a team to watch.

Dana and Amanda are another team to watch (although if you can tell them apart at this point, you’re doing better than I am). They made very few mistakes, and if they’d been just a little bit luckier at one point or another, I think we could well have seen them beating Gino and Jesse to the mat. I also liked Simi and Ope’s dynamic and Brian’s supportive talk during Cynthia’s Roadblock. (What he lacks in collar-straightening, he more than makes up for with cheerleading.) These teams have the “working together” part of this mastered.

Nick and Matt, Dujean and Leilani, and Susan and Sharnjit all get the Purple Kelly award for invisibility. I would say they’re all pretty safe for a few episodes, at least until we get to know them better.

One final note: with region-blocking (and now cable-provider blocking) in full effect on the CTV website, I understand that for those of us who are not Canadian, watching the show is a little bit harder right now. Here is what I have observed: after about 24 hours, the cable provider block came off the CTV site, leaving the first episode fully accessible to anyone with a Canadian IP address. Some deft exploring of VPN options should have you happily watching this show in no time. (I am also given to understand that the Rob Has a Podcast patrons might have access to some alternative solutions that you free-riders might not. So why not take the leap and sign up to be a patron?)

Note that if I PMed or tweeted instructions or direct links to every single person who asked me, I would be unable to do anything else with my life. This is something you can figure out on your own. I trust you. You are smart. And obviously you have impeccable taste in television.