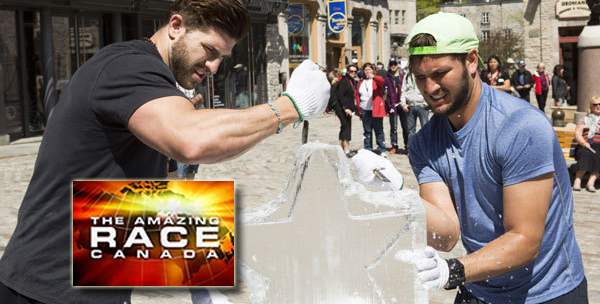 This week, The Amazing Race: Canada brought back a lot of things that longtime fans of the show know and love: funiculars, colorful task judges (Jet, Dave, and Michel the ice sculptor is the bromance of the season!), and the good old language barrier. Language trouble is a staple of Amazing Race incarnations that feature international travel, to the point where it’s a glaring omission in most of the incarnations that don’t. Not that I particularly miss those moments where culture-shocked insensitive Racers yell to the heavens, “English! EEEEENGLIIIIIISH!!!!!”. (Fortunately, in Canada, they apparently don’t go straight to that. They politely ask en Français first.) But I do enjoy the extra challenge it brings, and as a linguistics enthusiast, I am always happy when teams who have taken the time to learn at least a few words of another tongue end up reaping rewards.

However much as I love it, I do think the Race may have relied overly much on the language barrier to drive the Quebec City leg. Fully half of the tasks had a French vocabulary component. But maybe right after the grueling (and totally awesome) Regina leg, anything the Race threw at us would pale in comparison. It was, however, interesting to this Yankee to observe the range of French-speaking abilities among the competitors, from Holly and Brett’s relative fluency to Jody and Cory’s grade-school skills to Jet and Dave, the eventual “champignons” of the leg. In my experience, this seems to be a relatively good representation of the range of French-speaking abilities among Canadians as a whole, as did the range of English skills among the Quebecois they encountered along the way.

(Incidentally, when Vanessa and Celina’s cab driver pretended not to understand their perfectly adequate French and answered them in slightly snarky English, I had to laugh a little. A friend of mine who attended McGill University, in Montreal, told me this happened to him constantly.) 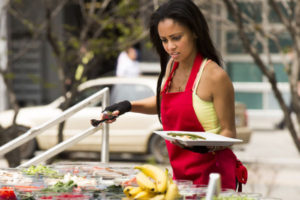 Correct me if I’m wrong, Canadians, but isn’t pretty much all of your food packaging labeled in both English and French? If you grew up eating “cheese/fromage,” “épinards/spinach,” and “strawberries/fraises” (whereas most of us down South just ate “cheese,” “spinach,” and “strawberries”), you should have learned pretty much every food word ever by osmosis, and if you studied French at all in school, it should be even easier. Maybe you didn’t hear them spoken, but you should be able to pick them out of a visual lineup. With a limited number of food items in front of you, even if you don’t know them all, you can probably use process of elimination. The judges were pretty particular about how the crepes were made and plated in the Roadblock, which added a layer of difficulty when most teams did just fine puzzling out the French food words, but anybody who didn’t has no excuse. (I’m looking at you, Vanessa.)

Holly and Brett had a great leg this week. Of all the teams, they seem to be the most erratic—every leg they’ve run has been either excellent or terrible. Certainly their French skills helped them out a lot this week, although we did see a few moments of Stressed-Out Holly once they hit a physical task. Her tendency to freak out at the first sign of a task unsuited to her is continuing to slow them down, as we saw when she immediately proclaimed “I’m not good at sports!” as they arrived at the lacrosse task. (Contrast this with Jet and Dave, whose coping mechanism for tasks that aren’t tailor-made to them is to make fun of themselves.) But it was great to see her take charge a little bit on the Detour and talk Brett through it. I’m fairly confident that in real life, the ratio of Brett calming Holly down to Holly calming Brett down is probably a little more even. On the whole, though, she’s coming off very badly on the show, and as a result, so is Brett. This suggests they’re either out before the finals or they make it all the way to the end, only to get defeated. Call it the Max and Katie edit.

Also having an unusually great week: Jody and Cory, who finally got as much face time as the other teams this week, and who had zero trouble on the tasks. Cory’s crepes looked almost professional. It’s unfortunate that another team is already occupying the “goofy guys” role, because in a vacuum the brothers are pretty cool guys, and in any other cast I think they would be excellent comic relief. In general, though, I’m happy to finally get to know them a little bit.

I am always hesitant to root for teams of physically fit guys. There has been a disproportionate number of winners who fit this description, from Rob and Brennan in Season 1 of the U.S. show all the way up to Bates and Anthony last season, to the point where those victories tend to seem inevitable and a little unfair. But not only is it kind of like rooting for the Yankees, it feels a little like I’m betraying my gender when an all-male team is my favorite. But I can’t deny it any longer. Guys, I love Jet and Dave. After three first-place finishes in a row, their win would not just seem predictable, it would almost be a shock if they didn’t win. But I don’t care. They deserve it, and I genuinely want them to have it, because they’re doing everything right and managing to be entertaining as hell in the process.

While the teams waited overnight at the Lévis Forts, Jet and Dave took advantage of some down time to create a fake clue—not out of strategy, not out of sabotage, but simply because they were bored. (Although the fact that their fake clue pointed to the cannons, where Vanessa and Celina actually found one of the clues the next day, might have ended up biting them in the ass.) They are genuinely having a blast out there, which makes them equally fun to watch. However, it’s easy to be so entertaining when your Race is coming together smoothly. They haven’t been hit with any gigantic obstacles or bouts of bad luck, and I would be curious to see how they’d handle, say, a delayed flight or getting the wrong directions from a bystander.

That said, the Tims did nothing but bleed time this week, and it was almost entirely due to their own poor judgment. Once they knew they were lost, they should have grabbed a cab immediately. Worst case scenario, Place de l’Université was right around the corner all along and they end up paying a guy five bucks to drive them three blocks. Junior also shoulders some of the blame for helping Vanessa with her French and enabling the sisters to get a jump on them. So even though they apparently knocked the lacrosse task out of the park, they wound up at the bottom of the heap yet again, and saved yet again by a non-elimination leg. Like Brett and Holly, the Tims’ performance varies widely, so it’s hard to say whether their second Speed Bump will finally knock them out of the competition.