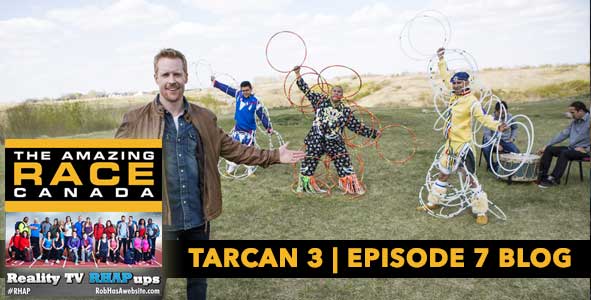 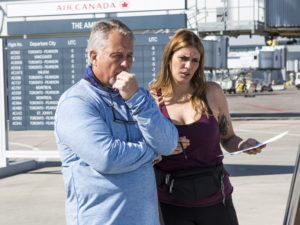 Defeated by a bunch of numbers. Kind of.[/caption]

We’re barely halfway through the season, and already Amazing Race: Canada season 3 has broken a TAR:Canada record, and seems to be on track to break a franchise record: with Neil and Kristin and Dujean and Leilani racking up quits number four and five, we’ve now achieved the most quit-related penalties of any season so far. (As far as I know, the franchise record is still held by Season 1 of Amazing Race: Asia, with six.)

But this isn’t an anomaly in the world of Amazing Race: Canada. Sadly, quit penalties are almost becoming commonplace. (As I said on our podcast, it’s like every task is now a Detour and the options are “Do Something” and “Do Nothing.”) It seems as though penalties have gone from a theoretical threat hanging over the heads of Amazing Racers to just another option available to them if they straight-up don’t feel like doing the task. At the slightest sign that a task might potentially take a team longer to complete than serving a penalty, teams are willing to throw in the towel. At least that’s true in Canada right now. And I have to imagine this isn’t something the course designers ever intended.

Granted, Amazing Race: Canada tasks tend to be a little tougher than their American counterparts, but with the possible exception of the lentils in Season 1, the tasks people quit have not really seemed insurmountable.  So I don’t believe the answer is to make the Race easier. I don’t think that’s necessarily a factor. In my mind, it’s all about perspective.

In the early days of the U.S. version, the penalty for quitting a task (at least a Detour task) was 24 hours. Of course, in the first ten or so seasons it wasn’t unusual for a team to wind up hours — if not an entire day — behind the pack, although their chances of winning were almost certainly totally blown if they went that route. Honestly, I’m not advocating for a 24-hour penalty. Logistically speaking, I see why that’s been abandoned. But I think it’s not the penalty itself that functions as a quit-deterrent, it’s the approach to that consequence and how it’s viewed in the greater context of the race.

In other words, back in the day, quitting a task was tantamount to quitting the Race, and it was viewed as something to be avoided at all costs accordingly. Nancy and Emily seemed to grasp that in the moment when they decided to stop looking for their car. They weren’t just completely over the Detour in that moment, they were completely over racing at large. They didn’t seem particularly surprised when Phil got all Disappointed Dad on them at the mat.

Similarly, during the first instance of the four-hour Roadblock penalty in action, season 6’s padlock Roadblock at Huayin, China, Hayden wasn’t just done unlocking locks — she seemed totally okay with their Race being over. There was an outside chance that Rebecca would have been compelled to take the same penalty a short while later, but by the time Hayden and Aaron hit the mat, they seemed fairly resigned to their fate, and sufficiently contrite about their decision to effectively disqualify themselves. (To Aaron’s credit, a mat proposal was definitely a good way to cheer everyone up.)

Of course the most notorious task quit in Race history occurred the following season, and also marked the first time someone checked out of a task with every intention of avoiding also checking out of the Race. Let’s go ahead and talk about the Rob that doesn’t suck and his weak stomach for a moment. But before we do, let’s note a particular quirk of the Season 7 Meatblock that often doesn’t get discussed: namely, quitting this Roadblock didn’t incur you a four-hour penalty from the instant you quit it. Your penalty began as soon as another team showed up to the Roadblock, and you were stuck at the estancia watching other people choke down animal parts until your four hours were up.

This, of course, is why Rob’s move of convincing two other teams to quit the task seemed so genius at the time, and also why he actually had a loophole to exploit that no other task-quitter’s ever had. He needed to get someone else to take that penalty, not just to have company at the back end of the pack, but so that he’d have someone behind him. It’s a different move from convincing two other people to quit a task after you’ve all been digging around in the sand for awhile and agreeing that you’ll all just sprint it out to the end. There’s a lot less at steak …er, stake. Once the quit penalties became largely dished out at the mat (or the following morning), a task-quitter generally didn’t have the chance to talk to people in his or her rear-view and convince them to follow suit.

I don’t believe any task after the Meatblock contained the stipulation that a penalty-taker had to wait until another team showed up to begin his or her penalty, which is, of course, just one more reality TV thing that Boston Rob broke. But the important thing to note is that the rule was changed precisely to prevent another task-quit for purely strategic purposes — something that they generally have managed to avoid on the U.S. version as long as nobody’s digging around in sand.

(n.b.: the Amazing Race wiki informs me that the current penalty for quitting a Detour in the U.S. version appears to be six hours, unless there’s some logistical reason — hours of operation, for instance — that a team can’t complete the Detour, in which case they are assigned a four-hour penalty.)

But here in Canada, task penalties seem to carry no such stigma. Maybe it’s because they’re conditioned to view penalties differently — after all, Canada’s number-one sport involves penalties as just another part of the game — or maybe it’s just because they don’t necessarily see quitting the task as the salient point of this action. Observe that whenever a team has pondered quitting the task, they don’t say the Q word. They generally say, “should we just take the penalty?”.

This is what Neil and Kristin have said during not just the task they actually did quit, but also every task (and there have been several) where they’ve pondered it. I can imagine that to a former professional athlete, the word “quit” is treated as invective, and it’s hard to throw in the towel if you can’t figure out some way to treat it as a temporary condition. But this is also how Dujean and Leilani phrased their quit, and how Nic and Sabrina did it back at the blindfolded soccer task. And don’t quote me, but I think Rex and Bob’s back-to-back penalties unfolded much the same way last season.

If TAR: Canada wants to stop the onslaught of task-quits, they’re going to need to make the penalty less attractive. That doesn’t necessarily mean they have to make the penalty harsher. It could just be a matter of semantics. Quitting a task is, essentially, breaking a rule, and it needs to be treated just like any other broken rule. Jon needs to stop telling people, “however, because you did not complete the task at the airport,” in his cheery little Jon voice. He needs to start saying something like, “however, you appear to have quit the task at the airport, which you were required to complete, and therefore, we must penalize you for this infraction. I can’t check you in for another four hours. Please go wait on the penalty mat and stay out of my way, and I will let you know when your punishment is up.” And then he needs to point the infraction out to every team that checks in during the penalty time. In other words, he needs to get in touch with his inner Probst and start letting a little bit of active contempt seep into this situation. This is especially true when the penalty might not actually have any bearing on their continued ability to race. Name and shame them, Jon.

(Incidentally, Amazing Race: Asia‘s Allan Wu is kind of a master of this. No other TAR host — not even Phil — is as good at raining disdain and disappointment down on rule-breakers as Allan Wu. I’m just going to point out that in Season 2 of Amazing Race: Asia, nobody DARED quit ANYTHING. Okay, fine, the festival of quitting resumed in Season 3, but he scared them straight for one season, anyway.)

Fortunately, though, not everyone’s as fond of penalties. As the numbers dwindle, here’s hoping we see some teams in the finals for whom “quitting,” “penalty,” and “can’t” aren’t even in their vocabulary.