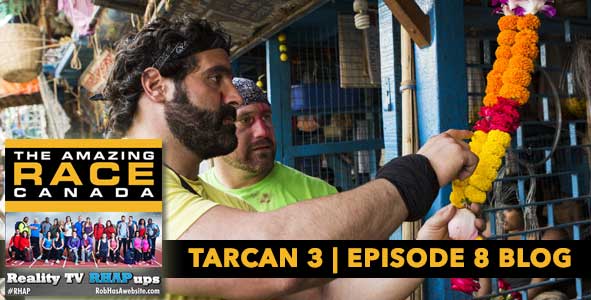 The outlook wasn’t brilliant as we moved into Leg Eight:
A mediocre season that I neither love nor hate.
Certainly some teams are fun, but largely Season Three
Is not the awesome show I expect TAR:Canada to be.

Not to say I’ve not enjoyed the season’s route so far,
And with Kolkata coming up, things might get up to par.
India could be the toughest leg of any race,
The heat and crowds and culture shock make it a crazy place.

As winners of the last week’s leg, the Sweeneys had a pass
To give away so one more team could fly in business class;
So was it smart to pass it to Leilani and Dujean?
I guess, but based on one encouraging word? Come on! 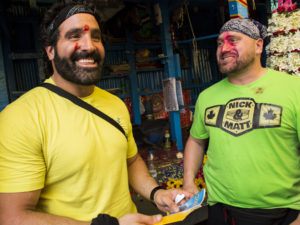 It seems a comfy seat turned out to be a huge advantage,
For these four teams, the first two out, the race seemed deftly managed.
Well-rested and clear-headed, they began to stitch the flowers,
And Brent and Sean were awesome with their detail-spotting powers.

But sadly, their attention to the details soon ran out
As Brent dropped to the back ’round Roadblock time, without
A sense of what small detail he was missing on Lakshmi
So they were passed by Gino, Nick, Leilani, and Simi.

The statues also proved too tough for one Manitoban cop;
As he yelled, “they’re all the same” right at the owner of the shop;
And here we have the moment when my faves’ race fell apart,
When Brian lost his cool, I think he also lost his heart.

While normally I find their deadpan wit to be the neatest,
The line is fine between “self-deprecating” and “defeatist.”
Could they have managed fifth place if they’d found a taxi faster?
Maybe, but to Brian, it was already disaster.

We watched them try to make up time with rickshaws and with sheets;
But other teams were better navigating in the streets;
Who knew that yoga poses would prove easy for the exes,
Or that of all the legs so far, this would be Simi and Ope’s bestest?

Let’s take a sec to talk about those newfound racing skills.
I think they’re galvanized because in travel, they find thrills.
Simi was excited when the clue said “India”
And her enthusiasm was contagious for her pa.

Are dad and daughter actual contenders now to win?
How many “namaste” puns will Montgomery shoehorn in?
Will Nick and Matt forever be consigned to second place?
Will this be nonelim leg Number Two of this here Race? (no.)

Although it seemed impossible upon its first appearance,
The yoga task proved gettable with a bit of perseverance;
Brent and Sean were never in real danger; we see that
The other bros and cops must now meet Monty at the mat.

As “tied for last place” came up at the bottom of my screen,
And Jon gestured to the greeter that he spotted one more team;
I couldn’t help but hope that Gino and Jesse would get passed,
(Even though they’re sympathetic when they fight it out for last.)

Now let’s be clear: I’ve nothing real against the bros Montani
But in re: first-place finishes, they’ve just racked up so many;
I have a tough time rooting for the front-runners; therefore,
When they hit a snag I find them easier to rally for.

But back to racing action: soon Team Number Five checked in,
And Gino/Jesse made it, so it wasn’t Bri and Cyn.
I haven’t had a truly favourite team in several seasons
So I will miss the Boyds for pretty much a billion reasons.

Intense like Jim and Misti, but secretly sarcastic,
On certain tasks more physical: hilariously spastic,
Supportive of each other, though they somewhat lost their fire,
I rooted hard for them to win the Amazing Race entire.

Oh, somewhere in this favoured land the sun is shining bright,
The band is playing somewhere, and somewhere hearts are light;
And somewhere men are laughing, and somewhere kids aren’t cryin’,
But there is no joy in RHAPville — bid farewell to Cyn and Brian.