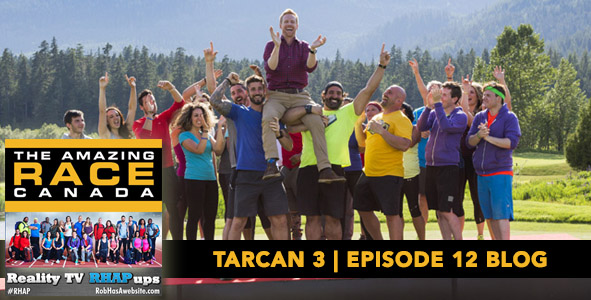 Well, another Amazing Race Canada season has come and gone, and with it, we add Gino and Jesse to the pantheon of winners. And although Canada has had three very different sets of winners these past three years, it’s hard not to notice that they all share one very particular defining characteristic.

I think anybody who’s followed my trajectory as a Rob Has a Podcast correspondent knew that this wouldn’t go unremarked-upon: as one of the considerable minority of women who contribute to the site, I feel almost duty-bound, for better or worse (memorably, someone once commented on RHAP telling me I needed to “get [my] head out of [my] feminist butt”), to address gender issues as they pertain to reality television. And with Big Brother 17 also making some interesting headlines in this regard recently, it’s been very much on my mind. So the question, then, is: with three all-male winning teams, does Amazing Race: Canada have a gender problem?

In a word: no, I don’t think so. At least, I think they do a better job at all of this stuff than most of the rest of television. In fact, I think TAR:Canada has done a far better job, on the whole, of casting interesting women capable of winning than TAR:U.S. does. If any team ever cast had the potential to win it all, I think Spooner and Mikkelson did, and it could be argued that one single moment of bad luck at the beginning of that final leg was the only reason they didn’t. And we’ve also had plenty of other strong women in contention: in addition to Vanessa and Celina and the aformentioned Meghan and Natalie, Holly, Audrey, Sukhi, Simi, and Cynthia could all hold their own in challenges. In Australia, where they’ve also had three all-male winning teams, there was a better than good chance that we could have seen Sam and Renae, or Michelle and Jo, pull out a win.

So many bros! Bros as far as the eye can see![/caption]

I can’t lie — after three seasons and a finale pool that’s only 22% female, it would be nice to see more women in the Canadian winner’s circle (or at least on the podium). But honestly, I don’t want any Race to do anything different to try to get a female winner (or winners) just for the sake of having them.  And I don’t know how you manage the former without doing the latter. (Casting? Maybe. Throw a Meghan and Natalie onto every season of every edition and we’ll see how that shakes things up. Make finding and casting that team the priority over casting those teams who give us the soundbyte about how half their luggage is makeup.)

If the Gino and Jesse type team won every season of TAR: Canada, I might be a little bit more out of sorts. But I think despite the fact that there’s no gender diversity in TAR:Canada’s winners, there’s diversity in other regards: ethnic diversity, socioeconomic diversity, relationship diversity, age diversity. Nobody had a father/son team pegged as winners from day one, for instance. That makes for a slightly more balanced pantheon of winners, and it points to a race course that calls upon many different types of skills.

I wouldn’t even say that I find Gino and Jesse’s win to be all that formulaic, either. Gino and Jesse’s win wasn’t exactly a foregone conclusion. They came very close to elimination more than once. They placed as low as tenth, and there were absolutely points where we saw them implode a little bit. As much as Dan and I liked to mock their robotic soundbytes on the podcast, they were very human, and they made a multitude of very human mistakes that they eventually had to overcome in order to win. They were the heroes at certain points, and villains at others, and at the end of the Race, you got the sense that they’d grown as people.

Not to mention the fact that they were up against two teams who’d bested them multiple times in the past, and who very dearly wanted to win. Obviously, the rivalry with Nick and Matt was a major storyline, but I do think that Brent and Sean could have easily crept up on both teams and snatched the rug out from under them. We could craft a logical storyline around any of these teams had they won, which isn’t always true either (or, at least, it isn’t always easy to do the fan-fiction gymnastics we’d need to make it feel plausible).

Overall, I think the ups and downs of this finale proved that even when the end result is not exactly a shocker, and the entire enterprise still seems kind of dude-heavy, there can still be room for suspense, entertainment, and a supercut of a contestant vomiting, no matter what the gender balance of the finalists might be.