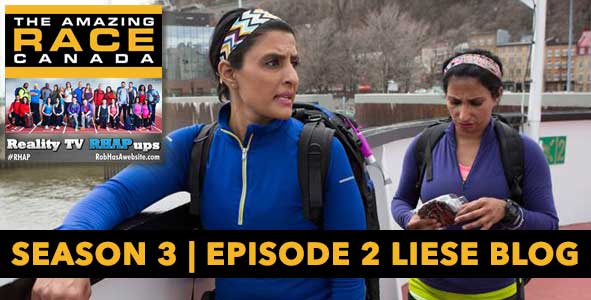 I know it gets repetitive when I say that this program basically throws a giant spotlight on all of the ways its American predecessor is deficient, but this week’s episode of Amazing Race Canada really highlighted one in particular: its cast. I worried initially about the fact that a good number of these teams didn’t appear to be super fans the way that most of the previous two casts were. I thought there was a good chance that TAR: Canada had begun following a more American casting model of sacrificing enthusiasm for being on this show for enthusiasm for being on television, and I’ve never been happier to have been wrong. I love nearly all of these teams. We have a tremendous mix of personalities in this cast, and their enthusiasm levels are off the charts. Teams who were solidly middle of the pack last week have fought their way to the front this week. Anyone who thought Brian and Cynthia were going to emerge as true competitors after a sort of meh showing in Leg 1, pat yourselves on the back, you’re in a tiny minority.

I’m also happy to have been wrong about Gino and Jesse having basically no competition in this Race. I think it’s pretty clear from this week’s episode that not only is there going to be more than one force to be reckoned with this season, Gino and Jesse are not the total indestructible race beasts I feared they were going to be.

But it’s not all good in the neighbourhood. Just because these teams are likable, just because they seem well-equipped to race like pros…it doesn’t mean they’re immune to making mistakes. And oh, what mistakes they made this week. I made one particular face so many times this episode that I decided to bring in an expert in making this face to illustrate my reactions for the blog. Ladies and gentlemen, I give you: my good friend, Jackie Chan. 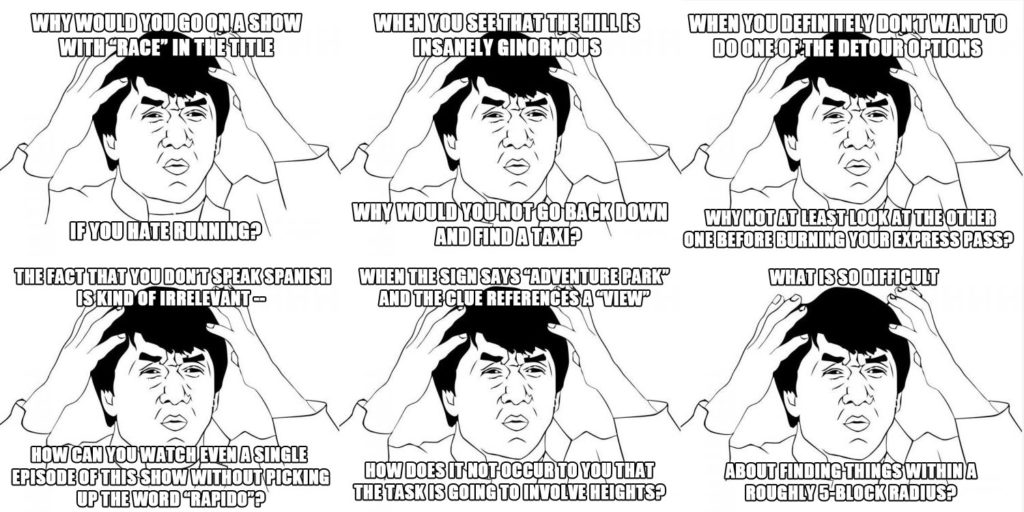 Click image to see are larger version. It’s easier to read the joke that way.[/caption]

Good mistakes, of course, make for an entertaining week, and I’m definitely not calling any of these people stupid. Chances are any one of us would make the same — or worse — mistakes if we were placed in the pressure cooker of the Amazing Race. In a way, I’m actually saluting you all, racers: without your foibles, this might have been a much more boring leg. The more times we make this face, the more fun the episode is. And if only one team makes a mistake, that team is almost certainly out of the race, right? I don’t know for sure how far behind the brothers Susan and Sharn actually were in the end, but given the tough time Gino and Jesse had with the dancing task and their near-fatal navigation error at the foot of the hill, it sure felt like it was a close one.

We should revisit one of these references for a minute, though: Hamilton and Michaelia’s Express Pass maneuver. Their use of their pass was probably okay — at that point, they knew they were in first place, and using the pass on what was almost certain to be the last task of the day guaranteed them an awesome trip, some free gas, and a leg up on the other teams. They’re fairly confident in their ability to remain competitive without it, and furthermore, they probably didn’t know the things that we knew: namely, that Susan and Sharnjit were so far behind the other teams that it would take an epic screw-up to truly be at risk of getting eliminated; and the other, more fully clothed, half of the Detour was a bare five blocks away — certainly within striking distance if they wanted to at least go check it out. There were some uncharacteristically tough tasks this week, especially for such an early leg, and that certainly factored into their decision.

(Nearly all of the sites that various Amazing Races have visited in Santiago, in fact, are all within a few blocks of each other, with the exception of San Miguel, and a couple of them are basically right on top of each other. Between that and having some sense of the sheer scale of Cerro San Cristobal, I think knowing a little bit about the city’s layout definitely changes the way you watch the episode. If you are bored this week, go back and watch episode 2 of Season 7 with a map of downtown Santiago in your lap, and discover that anyone who did the “Schlep” half of the Detour finished their task right next door to the Pit Stop, whereas Shoppers still had 8 blocks or so between Mercado Central and Cerro Santa Lucia. FYI, the Donde Augusto restaurant is touristy, but delicious, and ten years on they are STILL proud of being featured on TAR. Try the congrio. But I digress.)

But I think Hamilton and Michaelia’s biggest error when it comes to the Express Pass actually lies in overestimating how much other people are going to care about it. Michaelia points out that other teams are going to be nicer to them if they think there’s something in it for them, and I would imagine that’s true to a point, but honestly, when has a team ever benefited from making the ceremonial Giving Over of the Second Express Pass into a big deal? Tim and Marie mostly just annoyed people with it. Kristen and Darren ended up experiencing a little karmic retribution when they spent more time agonizing over who should get the second Express Pass than they did thinking about when might be a capital time to use their OWN…and they got eliminated with the pass in their pocket as a result.  Bottom line: you’re probably better off spending all that time thinking about how you’re going to stay ahead of the competition rather than figuring out which competition will make the best ally. Pick a team, give ’em the pass, and move on.

Another controversial opinion: some racers think it’s better to keep the Express Pass out of play as long as possible, but I think the sooner you give that thing up, the more opportunities it has to get used. From a game-theory standpoint, you want that Express Pass to get burned off while there are still many variables in play. Multiply the number of teams remaining times the number of tasks remaining (i.e., the number of situations in which an Express Pass might be useful) and you’ll see that every week, the Express Pass usage scenarios exponentially decrease.

Put another way: if you wait until the last minute to give it away, the chances that a team will use that pass to save themselves at YOUR expense go WAY up. Not to mention the chances that another team will get exasperated at your constant attempts to leverage it and U-Turn your wishy-washy asses.

You know who I bet would have the game-theory aspects of this down pat? Nic and Sabrina. With each passing week, I’m more and more impressed by their self-awareness and their ability to use their brains to get around anything they might lack in the physicality department. I’m not sure if I necessarily think this is going to be enough to take them all the way to the end, but I do think we will see them outlast a few other teams that are exponentially more qualified in the brawn department, and I do think watching them problem-solve their way out of difficult situations is going to be one of the most entertaining aspects of the season.  I’d be very interested to know what THEY would have done with a second Express Pass…and I’m dying to see what happens if they’re near the front of the pack when the U-Turn shows up.

And speaking of smart cookies, I’m now turning the reins of this blog over to my good pal Dan Heaton for the next 2 weeks while I do a little international traveling of my own. While he probably won’t put as many memes into his coverage, you can rest assured that I’m leaving you in the most capable of hands.