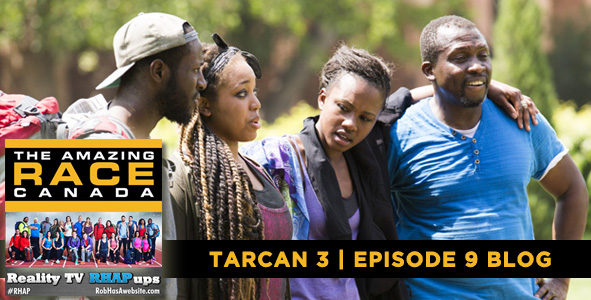 For this week’s blog, I was inspired by a great question from Twitter user @SurvivorTwerks, who asked me, “what are the top 5 ingredients of a great season?”

I’m not sure if this totally answers that question, but I will say it was a great jumping-off point.

Sure, I can tell you that a great season hinges on things like a “great route” and “great cast,” but those things seem kind of obvious. There are better, more nuanced metrics to go by, I think. Let’s dig a little deeper and think about the specific moments that make a season stand out. It’s still a little too soon to tell whether TAR:Canada 3 is going to be one of those seasons, but there have been some moments even in this week’s episode that hint at its potential.

1. I want to see a team struggle initially but learn from their mistakes and come into their own.

I’ve said it on the podcast before: there’s nothing I love more than being wrong. See, I have seen a LOT of Amazing Race. And over time, there are certain rhythms and patterns that I’m starting to observe in every season. As early as the first episode, you can guess with some accuracy which teams are going far and which teams are total cannon fodder.

Which is why it’s so awesome when one of the teams that doesn’t stand out initially ends up really coming into their own. And certainly Simi and Ope, who definitely weren’t contenders to begin with, are starting to get there. I don’t think this necessarily means they have a shot in hell at winning, but it’s pretty fantastic to see them piecing it all together. 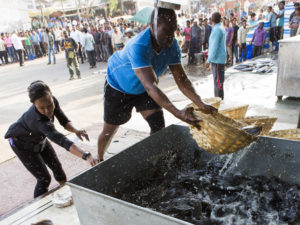 Emerging as contenders? Maybe not, but they’re good for a personal-growth arc.[/caption]

In order for this to constitute a real payoff, though, we’re going to have to see them overcome some of the specific weaknesses that had them at the back of the pack in the first place. With a water challenge on the horizon, I think Ope will definitely have the opportunity to show growth where it matters most, but it remains to be seen whether we’re going to get that epic moment of personal transformation.

To a lesser extent, watching Nick and Matt finally get that first-place finish also scratched this itch, but the way this was hyped up just sort of feels like now that they’ve won a leg, there’s nothing more to their story.

2. I want to see a team get totally emotionally destroyed — and then redeemed — by the Race.

Between killer tasks, culture shock, jet lag, and the general pressure of the Race, it’s not surprising that there are high highs and low lows throughout the season. But what’s fantastic is when a team hits rock bottom, only to find it in themselves to make an epic comeback.

There’s a very good reason that the TAR:US Season 6 leg in Hungary is my all-time favorite. Apart from the task that forced a racer to eat his own vomit, I mean. In that particular leg, pro wrestlers Lori and Bolo missed a train and wound up hours and hours behind the competition. They assumed they were out of the race, only for a well-timed superleg and a fortuitous (and very gross) Fast Forward to propel them back to the front of the pack. It was Amazing Race suspense and drama at its finest.

And we certainly see a bit of that in many non-elimination legs. (I say “many” because some teams, obviously, seem almost disappointed after mentally preparing for the axe to fall when they find out they’re going to have to stick it out for one more leg.) But it’s never a guarantee.

I have little doubt that Brent and Sean will turn it around next week — if not in spectacular Lori and Bolo fashion, then at least into the middle of the pack. They’re hungry, and they’re not ready to go home yet.

3. I want to see the chinks in a great team’s armor.

It is no fun whatsoever when one awesome team steamrolls over the competition, especially when that team’s the Amazing Race equivalent of gamebots. TAR:US started changing things up after strong alpha males dominated the first two seasons, and for good reason.

Last season, Spooner and Mikkelson’s incredibly dominant run wouldn’t have been the most interesting outcome, but at least we saw Natalie’s nervous puking habit and Meaghan’s tendency to freak out if she didn’t have complete control over a situation. And that made them relatable, which made them rootable.

And it’s much the same story here when it comes to Gino and Jesse. I can stomach a Gino and Jesse win only because I’ve seen what they’re like when stress gets to them. I’ve seen them hopelessly lost and completely misreading a clue. I’ve seen them sniping at each other. And I’ve seen them come within a heartbeat of getting eliminated. A win from them would make sense to the season’s overall narrative arc, and we’ve gotten to know them well enough — and we’ve gotten to know the other teams well enough — to know it was something they had to earn. Between Dujean and Leilani and Nick and Matt, there’s plenty of strong competition left on the field, meaning Gino and Jesse’s win probably won’t be a grim, joyless march to the final mat.

Furthermore, the strong-ish competition means that if Gino and Jesse DON’T win, it might not seem quite as WTF as the previous two TAR:Canada wins did.

4. I want to see teams have to cope with something sublimely ridiculous. Preferably every episode.

I mean, cheese wheels. Bouncy kangaroo suits. Getting pelted with tomatoes. And now, catfish who crave freedom. As far as ridiculous tasks go, there’s not much more satisfying than watching people freaking out at touching fish and subsequently losing their shit when the fish try to make a break for it.

5. I need nonelimination legs (and other moments where there’s less suspense to work with) to feel like a pause to catch our breath, rather than a harbinger of a lackluster finish on the horizon.

As far as maintaining narrative excitement, nonelimination legs are a challenge, and I recognize that. Without the payoff of sending a team home, how do you repeat those familiar beats, and how do you keep from losing momentum? And the same is true if there’s a team whose ouster seems like a foregone conclusion. Think Nic and Sabrina, or Susan and Sharnjit, or maybe even Neil and Kristin.

My feeling — and as always, this is just my opinion, yours may vary — is that TAR:Canada thought they could coast through this nonelimination leg on the strength of an amazing location and a silly task, and it didn’t quite work out that way. Brent and Sean’s emotional reaction certainly helped the ending feel less anticlimactic, but especially when the previous week WASN’T one, I sort of saw this coming.

Whether this is a contemplative pause or a screeching halt, though, depends a lot on what we see next week.