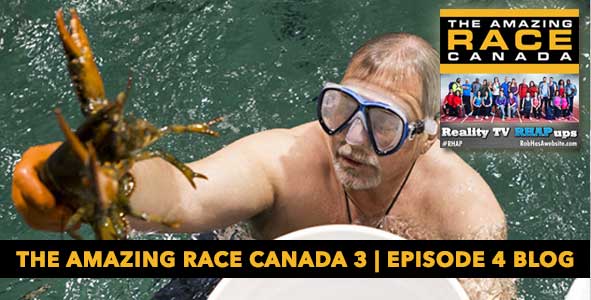 It’s common to see Amazing Race contestants struggle with killer fatigue as the finish line gets closer. All the stress, unfamiliar cities, and constant travel can take its toll on anyone. Producers love it because teams start making silly mistakes and can’t seem to complete even straightforward tasks. There were a lot of errors this week on the Amazing Race Canada. Many teams seemed overwhelmed by the circumstances and struggled to focus on the new set of challenges. What’s strange is how early this constant string of errors has come in the race. The fourth leg began with nine teams, and there’s quite a long way to go before the end.

A key factor could be the amount of travel the teams have already had this season. Each leg has included a flight, and several were very long. This week started at Buenos Aires in the morning and immediately sent teams on a four-leg flight to Halifax. They likely had limited sleep during a full day of traveling, and the previous leg was a grueling day. Few looked at the top of their game, and even Dujean and Leilani made a mistake at the Detour. They moved quick enough to take first place but didn’t have a flawless run. Brian and Cynthia ended up second despite losing a lot of time after switching Detours. It was that kind of week for everyone, and that made for a very fun episode.

One factor in the issues was even more task density than we saw in the first three legs. Along with the Detour and Roadblock, the producers added two Route Info challenges. The succession of four tasks in Halifax after a long flight (along with some navigation) made for a lot of tricky obstacles. The final outcome happened due to an early mistake from Hamilton, but there was enough drama to keep it interesting. When two players nearly have to climb up a giant bridge twice, it’s a great sign. The show keeps firing on all cylinders, and even the more capable teams aren’t cruising. 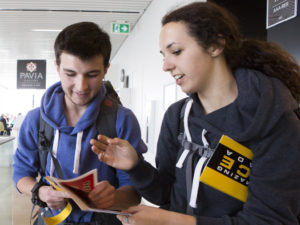 Hamilton and Michaelia couldn’t overcome one big mistake in the end.[/caption]

It’s too bad that Hamilton and Michaelia fell prey to the passport issues that doomed promising teams like James and Abba and Dallas and Toni in the past. What’s different this time is when the loss occurred in the leg. Hamilton didn’t lose his passport during the chaos of a task or getting out of a taxi. Instead, he just left it on the plane. That’s a strange way to lose the race, though it did help them to retrieve the passport and have a slight chance. I have a feeling they weren’t that close to catching Nic and Sabrina despite the editing. Locating the passport in the airport probably took hours.

Without the lost passport, there’s little chance Hamilton and Michaelia would have finished last. They were running with the leading teams and would have been in the top three. I don’t believe they were contenders to win it all, but they were better than I expected. They didn’t have the same intensity after losing the passport, which is totally understandable. The chances of survival were slim even after Nic and Sabrina failed at tasting smoothies. They shed a lot of time before switching Detours, yet I doubt it made it difference. The Halifax Airport is more than 30 minutes from downtown, so it was quite a hike.

The other story with the young duo was giving out the Express Pass, and the surprise winners were Brent and Sean. The reasoning made total sense given the bond between the teams, but we’d seen little evidence in past legs about that connection. Friendship and understanding outweighed $50 and the promise for future help from Gino and Jesse. I got the impression that the brothers didn’t even believe their pitch would work. It will be interesting to see if Brent and Sean face the Double U-Turn next week since everyone knows they have the Express Pass. They’re in good shape but have a bigger target now.

Nic and Sabrina have delivered great TV with issues at nearly any type of task. He had a particularly rough week and barely avoided a second climb up the Angus L. MacDonald Bridge through dumb luck. His fear of putting his face in the water also hurt their chances at the Detour and forced a switch. When you combine those issues with their troubles at the Orange Julius smoothie task, this was not the best week for Nic and Sabrina. What’s made their struggles entertaining is their ability to barely survive. Another factor is the way they’ve handled the strife. Nic and Sabrina seem more dumbfounded than upset by the obstacles. They’re unlikely to win the season, but I hope they survive for a while.

Another team that’s been all over the map is Gino and Jesse. They’re strong athletes yet continue to have bad luck with taxis. Of course, you can’t let the brothers off the hook completely. Even after Kristin (without binoculars!) gave Jesse the answer, he couldn’t explain it correctly to the cab driver. Thankfully for him, seeing the flag at Citadel Hill wasn’t hard from the ground. This dumb luck and impressive work at the Bubbles Detour helped them recover. Even so, there are warning signs that Gino and Jesse may not be the contenders we anticipated. Like Nic and Sabrina, they’ve hung in there despite their best efforts.

This week epitomized the challenge in figuring out who the real contenders are. Nick and Matt have been the most consistent and shown a knack for breaking challenges. Their choice to bring five teams together at the library task was curious but understandable. Why not ensure they don’t fall behind the others? It was early in the leg, so the chances for elimination were low. With the exception of a bad Roadblock, Neil and Kristin have been solid. They don’t lose focus under stress, which is rare. Simi and Ope have been okay but been mostly in the lower tier.

The other teams have moved between great and terrible racing. Brian and Cynthia are the best example and have rotated between ninth- and second-place finishes. Brent and Sean now have an Express Pass, but does that make them a target? Finally, Dujean and Leilani have quietly moved up the standings and won the leg. Of course, her knowledge of Halifax couldn’t have hurt. It will be interesting to see if they continue the strong play next week. Regardless, it’s thrilling to know so little as we enter the second act of the season. It’s been a strong four episodes, and I feel like we’re just getting started.