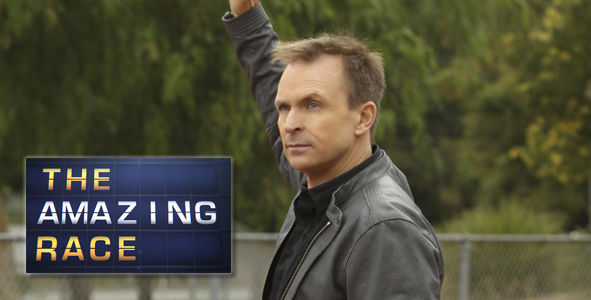 It’s true that I had some reservations about this season of The Amazing Race before it began. It’s equally true that these reservations have not yet been the least bit assuaged. The cast still has far more big characters than good racers (when an ideal All-Stars season would have represented both in equal measure), and the first leg’s challenges were anything but challenging.

But it’d be wrong to tar this season of TAR with the “Bad Season” label after only one episode. I mean, leg 1 is almost never the least bit compelling, even on the great seasons. There are too many racers to keep them all straight, and in the interest of giving everyone camera time, the course is light on interesting and/or challenging tasks. Meeting 11 teams, getting them to the first destination, getting them all through a Roadblock, and showing them making it to the mat…well, that’s an awful lot to cram into an hour. None of the premieres will ever go down in the annals of TAR as amazing episodes. The real fun wouldn’t start until later with ANY cast.

The last time my byline appeared on Rob Has a Website, I was reporting on some of the more interesting game variations I’d seen on international editions of TAR. Oddly enough, the premiere of Season 24 actually ended up using a few game elements that originated abroad, though none of the far-reaching twists I highlighted. Seasons 1 of Amazing Race: Asia and Amazing Race: Australia both featured a Route Marker hidden in a percentage of gondolas on a Ferris wheel (in Singapore and Dubai, respectively). And in the premiere of the first season of Amazing Race: Norway, the racers’ first task was to find one of a finite number of clues distributed among a handful of locations in the Oslo airport—sound a little bit like combing a bunch of bridal shops in Guangzhou?

Indeed, most foreign editions of the show include a lot more action at Route Markers than the American version historically has. Every other episode of Amazing Race: Asia, for instance, seems to feature a dozen Route Marker clueboxes scattered across the grounds of a temple or park, with the correct clue in only one (or a few). You rarely just stop at a clue box in front of some random landmark and find out what other random landmark you’re going to find next. You have to work for nearly every clue. If this is a trend we’re finally catching up to, I can confidently say I’m 100% on board. Sure, luck often plays a role, but there’s also a certain amount of skill and logic at play. Teams who read up on their game theory might end up having a little bit of an edge, and that can’t be a bad thing. I was glad to see the return of the starting-line scavenger hunt as well, which was used to great effect in seasons 15, 18, and 19, among others. Here’s hoping we see more of this sort of thing as the season progresses.

We did see one thing we’ve never seen before, though, on ANY edition of the show: the 11th hour replacement of a racer with a completely unrelated third party. That twist, though, doesn’t seem like it’s going to work quite as well. I have previously discussed the idea that race teams who aren’t particularly close to one another in real life can turn this into a competitive advantage on the Race. Eric and Danielle couldn’t have cared less about each other, and it helped them win the first All-Stars. Other teams of “friends,” like the poker players from season 15, the flight attendants in season 14, and Joey and Meghan, have been able to focus 100% of their energy outward without getting bogged down by baggage, simply because baggage between the two of them was minimal. But all of these teams at least went into the Race knowing who their partner would BE. Moreover, they had a few weeks to prepare for the Race and probably a week or so locked in a hotel room while Production finalized the cast and course. So Mark and Mallory’s situation is totally unique in Race history, and that is already posing a problem for them.

Mark and Mallory might have sat side by side at the same autograph table once or twice, but that’s not the same thing as traveling through a foreign country with a camera in your face. There’s still a lot they don’t know about each other, and it shows. They also don’t seem to trust each other to make decisions, which is an important and often underrated Race skill. Teams who can’t allow each other to make decisions on which Detour to choose or whether they have enough information to move on have never done well. If Mallory can mellow out a little bit and Mark can get comfortable with the idea of racing with someone who isn’t Bopper, they might be able to overcome this obstacle. But I’m not optimistic.

On the flip side, I think it’s entirely possible to know your race partner TOO well, which may have been part of why Natalie and Nadiya spent the entire first leg failing harder than Bopper’s pancreas.

Unlike in Asia and Australia, where a gondola went out of play once a team found the clue inside it, the clues on the Canton Tower wheel stayed put. The logic that Teams who observed another team succeeding at the task could simply choose that gondola on the next go-round. Natalie and Nadiya were so consumed with who had missed what detail when that they evidently missed this detail. Nobody would have ever called the Twinnies cool-headed, but on their first outing they were usually logical thinkers who could perform under pressure. It might have been the stress of feeling the need to improve on their previous 4th-place finish, or being thrown for a loop by having so much trouble with the bridal shop task. I suspect no matter what the actual culprit was, the twinnies expected a much easier first leg than they got. To be clinging to the back of the pack next to the likes of Joey and Meghan, barely one day into the race, had to have thrown them.

While the show was inevitably going to underedit a substantial portion of the teams, as it does in every season premiere, unexpectedly, this week we saw very little of usual lightning rods for conflict Brendon and Rachel, reliable sob stories Dave/Connor and Margie/Luke, and comic relief Flight Time and Big Easy. As expected, Caroline and Jen also got lost in the shuffle and the Afghanimals had a moment, but seemed positively subdued compared to some of these other huge personalities. The episode belonged primarily to the Twinnies and their meltdown (and YouTube and their smaller, adjacent meltdown), Team Kentucky’s switch-up, and the cowboys’ mistake-free leg. I believe the strategy of keeping their heads down and running their own race might be Jet and Cord’s smartest move ever. It won’t win them any extra camera time, but if they’re this focused on every leg, the third time might well be the charm for them. Is that my favorite outcome? No, probably not. But it’s not going to kill the show for me, either, provided the path is straight and narrow.